Recent earning releases haven't been kind to Carnival shares, and the company's imminent report is fraught with potential pitfalls.

Carnival Corporation (CCL -2.56%) stock has provoked much consternation on the part of shareholders as of late. Shares peaked in early 2018, and they've gained just 6% during the last three years, although they've advanced 16% on a total return basis during this period thanks to a generous dividend (which currently yields 4%). The cruise-line operator is expected to unveil its fiscal third-quarter 2019 earnings on Sept. 26, and angst and trepidation are in the air. Company shares have repeatedly sold off after earnings reports during the last two years, and investors are bracing for another potential sell-off due to external factors.

Carnival disappointed shareholders last quarter by revising fiscal 2019 earnings per share (EPS) downward to between $4.25 and $4.35, from an initial range of $4.35 to $4.55. As I discussed in my earnings recap in June, the slimmed outlook stemmed from four factors: U.S. regulatory changes which have crimped cruise sailings to Cuba; technical problems with the company's Vista vessel, which caused voyage disruptions in the second quarter; headwinds from fuel prices and foreign currency translation; and geopolitical uncertainties related to Brexit. 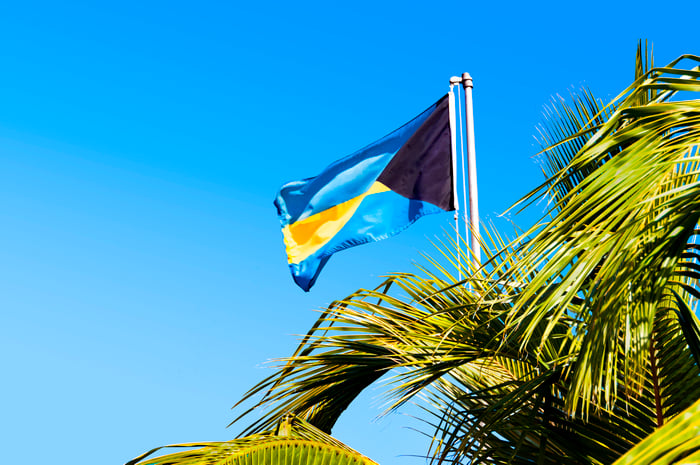 To these four pressures buffeting earnings, shareholders can add two additional concerns. The first is the impact that Hurricane Dorian will have on fiscal 2019 net earnings. While the company doesn't disclose revenue associated with specific countries, the Bahamas is a significant destination in the Caribbean region, which itself accounts for 32% of the company's passenger capacity by itinerary (more than double the capacity of the next-largest region, Europe).

Carnival announced on Sept. 8 that it was resuming some of its Bahama sailings, alongside delivery of humanitarian relief supplies provided by the Carnival Liberty and Carnival Pride. And earlier in the month, on Sept. 3, CEO Arnold Donald reaffirmed the company's long-term commitment to the popular island group, stating that Carnival intends to proceed with its two major projects in the Bahamas: a $100 million "mega" cruise port on Grand Bahama Island, and a new cruise pier at Half Moon Cay, which will be built at an estimated investment of $80 million. In the immediate future, however, shareholders will almost certainly see a reduction in EPS attributed to Dorian; only the magnitude of the earnings revision is in question.

The second concern is the impact on earnings of fuel costs due to the mid-September drone attack on Saudia Arabia's oil production facilities, which instantly took roughly 6% of the world's daily oil production offline. Crude-oil futures spiked by 15% on Monday, Sept. 16 -- although as of this writing, futures prices had slipped by 4% in Tuesday trade, on indications that Saudi Arabia would be able to recover 70% of its daily oil production sooner than expected.

Nonetheless, fuel prices are likely to remain elevated for some time, as oil traders place a risk premium on crude oil due to the possibility of further supply disruptions. Heftier fuel costs will negatively influence the earnings of Carnival and rivals Norwegian Cruise Line Holdings and Royal Caribbean Cruises. Carnival previously projected fuel cost per metric ton consumed of $463 for full fiscal-year 2019; this number may well get bumped higher in the upcoming earnings report.

Looking more narrowly at third-quarter earnings, the strike on Saudi facilities came after the company's quarter-end on Aug. 31, and Dorian made landfall on the Bahamas on Sept. 1. Thus, Carnival's current-quarter EPS estimate of $2.50 to $2.54 may be only slightly affected (that is, challenged only by the run-up to Dorian's landfall).

Of more concern to shareholders will be the damage to fourth-quarter and full-year bottom lines. Should Carnival stock fall yet again after the earnings release, it may be time for value-oriented investors to consider these shares. Carnival now trades at just 11 times forward earnings, and its handsome dividend yield only sweetens the incentive to take an initial position.