These innovative healthcare companies promise investors a way to benefit from medical breakthroughs without the usual risk.

The world of biotech investing can be tricky, and that's particularly true when it comes to small-cap stocks in the industry. These companies often have terrific science, but no profits and little (if any) revenue. And yet there are outstanding opportunities among biotech stocks for investors who know what to look for and have a long-term outlook.

Perhaps the best strategy for gaining exposure to this space is to invest in a handful of small-cap biotechs. By doing so, you diversify your risk, and one winner can more than make up for two or three losers. Investors can further stack the odds in their favor by choosing companies with multiple drug candidates in their pipelines. Here are two small-cap biotechs that fit that profile: MeiraGTx (MGTX -2.26%) and BridgeBio Pharma (BBIO 4.33%).

MeiraGTX is a small cap (valued at $678 million) with an ambitious program and six molecules in its pipeline. The company is focused on three distinct forms of genetic disease: ocular, neurodegenerative, and salivary gland.

The stock took off earlier this year when Johnson & Johnson (JNJ) became a minority shareholder and signed a $440 million deal with the tiny biotech. Johnson & Johnson acquired rights in three MeiraGTx drugs that might cure blindness caused by a genetic defect. Two of the drugs are focused on Achromatopsia caused by mutation in the CNGB3 and CNGA3 genes, and the other eye drug is a cure for people suffering from X-Linked Retinitis Pigmentosa. Under the contract, Johnson & Johnson is funding all clinical development of the drugs. MeiraGTx is also developing an eye drug (not part of the JNJ deal) that targets blindness caused by RPE65-deficiency. 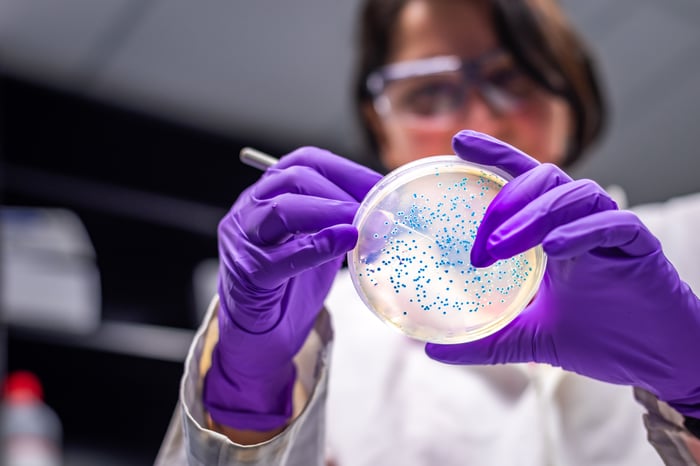 Perhaps its most exciting program is in neurodegenerative disease. MeiraGTx has plans to find cures for Parkinson's, ALS, and Alzheimer's. Its Parkinson's drug has finished a phase 2 trial with positive results. Unlike other drugs that only treat symptoms of the disease, this drug actually created new neural networks in the brain. CEO Zandy Forbes said, "We believe our novel gene therapy product candidate could potentially transform the treatment of Parkinson's disease patients."

The science of gene therapy is so powerful, big pharma has been acquiring tiny biotechs for billions of dollars. In April 2018, Novartis (NVS 0.87%) acquired AveXis for $8.7 billion to get its spinal muscular atrophy drug, Zolgensma. And in January, Roche (RHHBY -0.37%) acquired Spark Therapeutics for $4.8 billion for its cure for blindness caused by RPE65-deficiency, Luxturna.

Johnson & Johnson's deal with MeriaGTx not only validated its platform, but it caused investors to speculate the company might be acquired outright. MeiraGTx has a larger and more diverse pipeline than AveXis and Spark. Since the deal was announced, shares of the small company have tripled, from under $10 a share in January to $30 a share in July. MeiraGTx used its share price to raise more funds for its drug development by issuing a secondary offering. This dilution brought the share price back down to $18 a share. And yet this small-cap biotech has $200 million in cash, almost no debt, a major drug partner to finance half of its clinical trials, and a headstart on its competitors in finding a cure for Parkinson's. The future looks bright.

BridgeBio Pharma is a $3 billion dollar biotech with a dizzying array of subsidiaries and drug development programs. Whenever BridgeBio finds a new drug candidate, it creates a new subsidiary specifically for that molecule. And while it's a small cap, the company has eight drugs in its pipeline and another eight drugs in preclinical development for a total of 16 subsidiaries. Each subsidiary is responsible for its own drug platform. BridgeBio owns 66% of one publicly traded biotech, Eidos Therapeutics (EIDX), and owns its 15 other subsidiaries outright.

BridgeBio and its subsidiaries are focused on gene therapies and oncology drugs. One of its subsidiaries, Origin Biosciences, is running a phase 3 trial to test a drug for MoCD, an ultra-rare metabolic disorder affecting 100 people. Another subsidiary, PellePharm, has a phase 3 molecule for people who have Gorlin syndrome, a rare condition that increases the risk of developing cancer. And BridgeBio's publicly traded subsidiary, Eidos, is running a phase 3 trial for its cure for TTR Amyloidosis, a disease that affects more than 400,000 people.

In its Form S-1, BridgeBio identifies five programs that the company believes are its key value drivers, and it has prioritized them. The first one listed is BBP-265, which is the drug being developed by Eidos for use as a TTR stabilizer.

Eidos actually came to the market before BridgeBio, and it's up 272% from its IPO last year. BridgeBio owns two-thirds of its subsidiary, spending $75 million to acquire its shares. Eidos now has a market cap of $1.7 billion dollars, giving BridgeBio a cool 1,500% return on its investment.

Three of BridgeBio's key programs are not in clinical trials yet, so it will be a while before the market can value them. BridgeBio does have a major program in cancer. Its subsidiary, QED Therapeutics, is enrolling patients for a phase 3 study for Infigratinib, a front-line therapy for bile duct cancer. The company is also planning a phase 3 trial for bladder cancer.

BridgeBio is a fascinating small-cap biotech stock. It has near term catalysts, as several of its drugs are in phase 3 trials. And it also has a huge pipeline of drugs to spur future growth. On the other hand, its $3 billion market cap is more than four times bigger than MeiraGTx's valuation. And MeiraGTx has an impressive pipeline of its own, with six molecules in clinical trials. I'm bullish on both companies, but given the price differential, I'd favor MeiraGTx right now.