Please ensure Javascript is enabled for purposes of website accessibility
Log In Help Join The Motley Fool
Free Article Join Over 1 Million Premium Members And Get More In-Depth Stock Guidance and Research
By Daniel B. Kline - Sep 19, 2019 at 9:01PM

The company's executive chairman thinks meat is meat, no matter what source it comes from.

Many people seem to accept soy milk, almond milk, and other nondairy alternatives as "milk." These products are typically sold in the dairy section of the grocery store, and to many consumers, they're simply other types of milk. 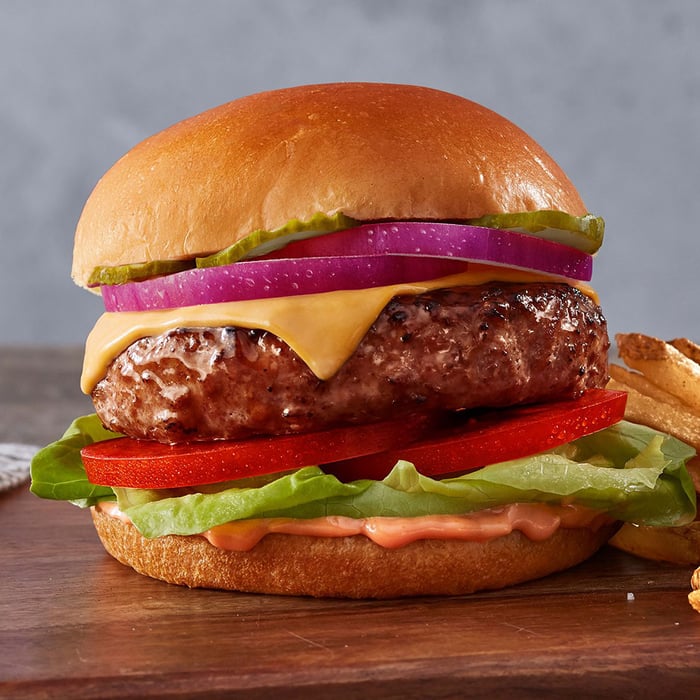 Goldman gave the keynote at the 2019 GroceryShop trade show in Las Vegas on Sept. 16 and noted that as recently as 1985, the dairy section at most grocery stores consisted largely of whole milk. Now, over 51% of the milk options in today's grocery stores, he said, are nondairy.

That's the future he envisions for his company. He sees its plant-based offerings being sold like any meat product, in the same section of the grocery store, rather than isolated on their own shelves.

Setting the stage for this evolution, Goldman believes that the power dynamic in the grocery business has shifted: Greater choice and the option of bypassing traditional grocery chains have given consumers more control.

"It used to be that manufacturers would produce something, grocery stores would carry it, and the consumer would buy it," he said. "Now that consumers have more power, things are moving in different directions." Consumers, Goldman said, can force companies to think about things beyond the bottom line. It's not just about what they buy but also where they buy it.

"When I grew up, there were basically two, maybe three places where we could buy groceries," he said. "Then you saw more competition. Then you saw more options -- the farmers' market, the people buying groceries at the drug store and the convenience store, Trader Joe's, and other options like that, and of course, online too."

That gives consumers power to think about what they're putting into their shopping carts. Shoppers can consider not just the quality of the product but how it's sourced, whether the people in the supply chain are treated well, and how the company spends its money.

"All of this leads to what I talk about as the 'undoing of food,'" he said. "You've got conventional food, and as people demand more transparency and more options, we move toward an undoing, a simplicity of product where they can see where it's going and how it's sourced."

Bringing this to meat

The meat industry produces the largest category of food, according to Goldman. To keep up with demand, that industry has worked to increase the speed of raising animals while lowering the cost as well. The life cycle of a chicken, he explained, used to be 112 days; now it's 47 days. In his eyes, that process works for a while and then it produces diminishing returns.

"The bottleneck is the animal. There's only so many more animals we can produce on so much land," he said. "As we think about scaling protein across the planet, the bottleneck is apparent. So then, the question becomes: What are the other options?" He suggests that plant-based meat can be the answer, pointing to the fact that nondairy milk now represents about 13% of the U.S. dairy category. Meanwhile, meat is a much larger category where consumers have fewer choices.

"At Beyond Meat, we think if we can have 13% of the meat market, that would be a profound opportunity," he said. And to make that happen, the industry must first figure out taste. He joked that early veggie burgers might have been a conspiracy by the meat industry. Once that aspect of the equation has been solved, the challenge is to then change consumers' perspectives.

"What we really need to do is redefine what we think of meat," Goldman said. "All meat comes from plants. What happened previously is that the cow was the way we converted plants into meat."

Nondairy milks have the huge advantage that many Americans face digestive issues when consuming cow-based milk. That led to a clamor for alternatives and increased demand.

Beyond Meat does not have the same advantage. There are, of course, vegetarians and vegans seeking plant-based options, and there are meat-eaters looking for choices that reduce their toll on animals and the environment. Those target markets, however, have never proven big enough to move beyond niche opportunities.

Goldman is right that prioritizing taste makes sense. Is he also right that long-term demand exists for plant-based "meats" to be sold alongside animal-based meat? And after surging over 500% from its IPO price in just a few month's time, can Beyond Meat live up to its valuation as the darling food industry play? The answers to both of those questions remain far from certain.