The cloud-monitoring speedster goes public on Thursday, and it's a winner out of the gate.

It's not surprising to see Datadog (DDOG 1.52%) off to the races after going public on Thursday. The fast-growing provider of cloud monitoring and analytics tools checks off all of the boxes aggressive growth investors like to see in their fence-swinging investments. It only helps that Bloomberg reported -- on the eve of its market debut -- that Cisco (CSCO -1.41%) had offered to acquire the company in the weeks leading up to its initial public offering for more than the $7.8 billion that it ultimately priced at on Wednesday night.

Datadog passed on Cisco's bended-knee proposal, obviously. Despite the rough-and-tumble IPO market, Datadog felt that it had better chances for appreciation on its own, and so far, so good. The stock was trading 38% higher heading into the final hour of its first day of trading, pushing its valuation near $11 billion. Better luck next time, Cisco. 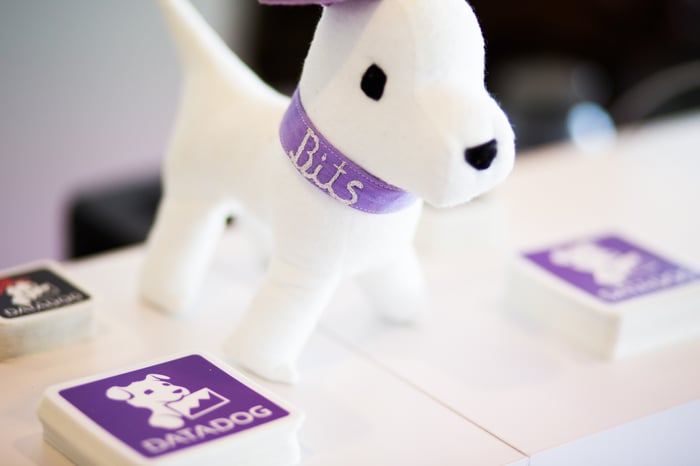 Datadog's proprietary platform offers its more than 8,800 customers a unified view of infrastructure and application performance against the real-time events impacting their overall success. In an era in which companies are often dealing with various cloud-fueled functions, Datadog's tools bring everything together so all departments can be on the same page.

Datadog works. Revenue nearly doubled to $198.1 million last year, and the top line is running 80% higher through the first of 2019. We're still early in Datadog's growth cycle -- it's a Datapuppy, if you will -- but it's got good bones. Datadog pegs the market opportunity at $35 billion, and it's currently at an annual revenue run rate of less than 1% of that.

Cisco wanting to sweep Datadog off its feet before it could dazzle the public markets on its own -- if true -- is a ringing endorsement. Even if it's not true, Datadog's satisfied customer base speaks for itself. The dollar-based net retention rate of 146% indicates that its biggest customers are spending even more on the platform than the year before.

There will be valuation concerns here, and rightfully so. Even at its IPO price, the stock was trading at nearly 30 times trailing revenue. The first-day pop props that already lofty multiple even higher. There's no point in trying to calculate a P/E, as Datadog is not currently profitable.

A lot of profitless companies going public this year have seen their opening-day pops turn into flops a few days or weeks later, but Datadog has all of the traits of a monster growth stock that will continue to draw bullish attention. Strong revenue growth and a dollar-based net retention rate well north of 100% imply that big gains will continue in the near term, and the platform is validated by some of its big client names including Activision Blizzard, Whole Foods, and Wayfair. Cisco may have been on to something if it had pursued an acquisition of Datadog, and now retail investors get their shot at ownership.

John Mackey, CEO of Whole Foods Market, an Amazon subsidiary, is a member of The Motley Fool’s board of directors. Rick Munarriz has no position in any of the stocks mentioned. The Motley Fool owns shares of and recommends Activision Blizzard, Amazon, and Wayfair. The Motley Fool has a disclosure policy.