Please ensure Javascript is enabled for purposes of website accessibility
Log In Help Join The Motley Fool
Free Article Join Over 1 Million Premium Members And Get More In-Depth Stock Guidance and Research
By Timothy Ronaldson – Sep 19, 2019 at 11:16AM

Retail giant Lowe's Companies (LOW 4.07%), which specializes in home improvement products for the everyday homeowner, is setting itself up for a successful second half of the fiscal year.

Investor confidence is increasing in Lowe's following the company's positive Q2 earnings call in mid-August. After starting the calendar year with a $92.27 stock price, Lowe's is now trading 22 percentage points higher than it was at the outset of 2019, at $112.73. In slightly more than a month, growing investor confidence can be seen in the stock's dramatic increase, up more than 20% from $93.38 on August 15.

Following the earnings call, Lowe's got a vote of confidence from wealth management firm Wedbush Securities, which upgraded its rating on Lowe's from "neutral" to "outperform," and increased its price target from $115 to $135. 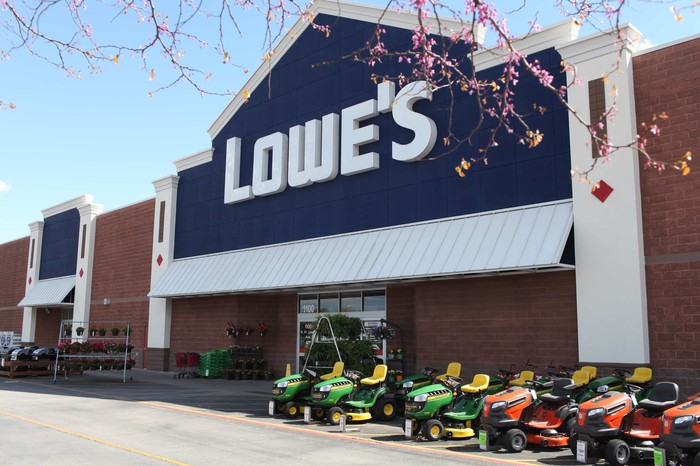 Wedbush said it expects Lowe's "CEO Marvin Ellison will be able to transform LOW into a much more productive and profitable company. LOW has reversed the long-standing comp with HD (Home Depot) for the past two quarters as its productivity-driving initiatives begin to take hold, including increasing job-lot quantities, better instocks, higher service levels and more targeted promotions."

In the August earnings call, Lowe's reported it had net earnings totaling $1.7 billion and diluted earnings per share of $2.14 for its second quarter, ending August 2. Those numbers represented a 13% and 15% increase, respectively, from the same quarter last year.

Ecommerce sales have traditionally been a strong point for Lowe's, which ranked No. 21 in the Internet Retailer 2018 Top 1000 list. Fourth-quarter ecommerce sales for Lowe's increased 11%, and 60% of all its online orders were picked up in a store. Home Depot, by comparison, ranked No. 7 on last year's list, and 50% of its online purchases were picked up in a store in the fourth quarter of last fiscal year.

"We capitalized on spring demand, strong holiday event execution and growth in Paint and our Pro business to deliver strong second-quarter results," said Ellison. "Despite lumber deflation and difficult weather, we are pleased that we delivered positive comparable sales in all 15 geographic regions of the U.S. This is a reflection of a solid macroeconomic backdrop and continued momentum executing our retail fundamentals framework."

The second-quarter results go to show how much can change in a short period of time. Shares of Lowe's bottomed out on May 28 at $91.87, the lowest point it hit all year -- almost a $20-per-share drop from only a week prior. That decline in investor confidence came following a poor first-quarter earnings call and the company's own downward adjustment of its year-long outlook.

One of the main reasons for Lowe's increased earnings was a change in strategy. For years, Home Depot (HD 3.57%) has owned the professional contractor segment of the home improvement sector. Possibly in response to the Lowe's earnings call, Home Depot disclosed it had reached 1 million "pro customers" for the quarter.

Lowe's, meanwhile, has always been viewed as the smaller of the two home improvement giants, focused on providing products, services, and assistance to the homeowner rather than professional contractors. But that mindset changed this year, and the company's new focus on reeling in the pros has paid off.

In just the second quarter, Lowe's said it added 35,000 new pro customers. While the company said it wouldn't divulge the total number of pro customers it has for competitive reasons, an increase of that number shows a step in the positive direction.

Lowe's attracted pro customers by bulking up on supplies to ensure adequate inventory, providing preferred parking spaces for contractors, and offering dedicated associates and supervisors at pro desks and pro areas of its stores.

What pro customers bring to the table for Lowe's, compared to the everyday shopper, is consistency and quantity: They buy often, and they buy a lot. A growing base of consistent, repetitive customers can be the fuel needed to vault any retail company forward.

Focus on paint could help Lowe's sustain during a recession

Having more pro customers is a good sign, but what would happen if a predicted economic downturn comes to fruition? In slower economic times, people often spend less on home improvement projects, and the contracting business suffers as a result. Lowe's is a consumer discretionary stock, not a consumer staples stock, after all.

One reason Lowe's results are so promising despite this possibility is its increased sales of paint. The company shifted its marketing focus away from broad promotions of its paint to more targeted promotions around the product. This attracted more customers to the store, who then purchased other home improvement supplies while there.

If an economic downturn does happen, these customers Lowe's has attracted through paint promotions will likely turn to the store for other home improvement projects they'll complete on their own. And, at least theoretically, Lowe's would be hurt far less than rival Home Depot, since it has less of a reliance today on these pro customers.