There is nothing more exciting than finding a stock that has been mispriced by the market.

There is nothing more exciting than finding a stock that has been mispriced by the market. The vast majority of cheap companies are cheap for a reason. Occasionally, however, you will be surprised to find a discount-priced small cap that is both fast-growing and dynamic. Two companies that fit that description are W&T Offshore (WTI 9.64%) and Farfetch Limited (FTCH 5.71%).

An oil company that zigs when the market zags

The development of fracking technology has caused a major shift in the oil industry, with an amazing boom in some parts of the oil sector and an equally remarkable bust in others. In the wake of this tsunami of new fracking oil, many companies have abandoned or severely curtailed offshore oil exploration and drilling. But W&T Offshore has decided to forgo the frackers in the Bakken and the rest of the shale universe and continue to do what it does best: find oil in the Gulf of Mexico. 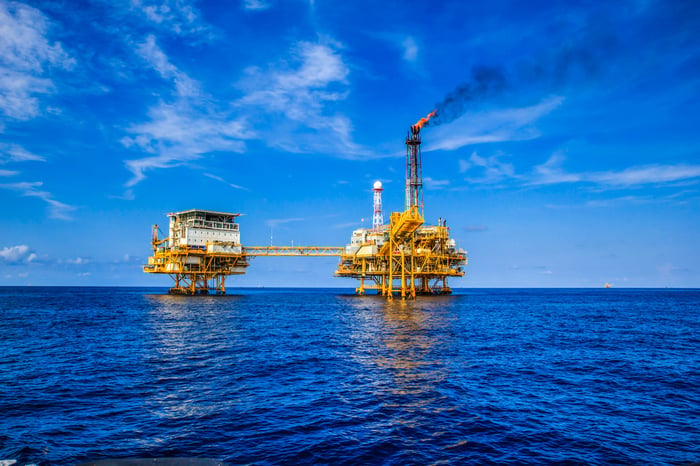 While the stock price languishes in the cheap seats, the company itself is doing quite well. Its profit margin is almost 32%. (Contrast this with ExxonMobil (XOM 5.06%) or BP (BP 5.66%), which have profit margins of 6% and 3%, respectively.) And its profit growth has been a thing of beauty.

W&T Offshore just spent $200 million buying up some highly accretive oil properties in the Gulf of Mexico's Mobile Bay. With this purchase, the company is now the largest operator in the area. Investors should see even more revenue and profit growth in the very near future, as W&T Offshore will start recognizing its new acquisition this month.

With a P/E ratio of 4, this stock is very cheap. Again, contrast this with the much higher multiples at larger players such as ExxonMobil and BP (17 and 14, respectively). While the price of oil will always fluctuate, fast-growing W&T Offshore seems like a strong buy right now.

An IPO on the discount shelf

Late last year, online clothes retailer Farfetch Limited had its IPO priced at $20 a share. The stock opened at $27 a share. The market would proceed to have a meltdown, taking Farfetch with it -- all the way down to $16 a share. The company rebounded in the first quarter of this year, with the stock price climbing up to almost $30. And then the bottom fell out again. Now the company's stock has dropped down to the single digits. Multiple law firms have announced class action lawsuits because of the falling price. Time to buy?

Despite the free-fall of its stock price, Farfetch itself is a fascinating company. It's a high-end fashion retailer that carries no inventory. Since getting stuck with expensive clothes that you can't sell is one of the major dangers of fashion retail, this business model is highly promising. Indeed, Farfetch is a "retailer" only in the meta sense of the word. The company runs an online marketplace where more than 1,000 retailers and brands display their clothes. Nearly 3 million customers from over 50 countries go to Farfetch to shop for high-end fashion. It is the largest digital luxury marketplace in the world.

The company's growth has also been spectacular. Revenue has jumped by more than 50% a year for several years in a row.

This rapid growth has caused the networking effect to get stronger and stronger. Farfetch's platform is so powerful that the company is able to charge a 25% to 33% commission fee on sales made through its site. As is common in internet retail, the company is incurring losses as it ramps up in size. Valued at $2.7 billion, Farfetch has very little debt ($115 million) and quite a bit of cash ($678 million).

The stock price has been increasingly volatile, dropping over 10% this week. Along with the price drop, there has been a deluge of lawyers making noise about class action lawsuits. And yet none of these lawsuits have been certified by a judge. And the claims of fraud seem particularly lame (that Farfetch “failed to disclose” that there is price volatility in luxury goods). Smart investors should ignore these stock shenanigans and look to the business instead. Farfetch is a vibrant and fast-growing website that is dominating high-end fashion. While it can be hazardous to try to catch a falling knife, the company itself has a very bright future.

I am bullish on both stocks, but neither is without its risks. While W&T Offshore is highly profitable right now, the price of oil is always volatile, which creates future uncertainty. And like almost all oil producers, W&T Offshore has to carry a lot of debt to run its business. In contrast, Farfetch has a lighter business model and very little debt. Its dramatic growth strengthens its network of buyers and sellers. Of the two companies, Farfetch has a superior business model, assuming management can scale the business successfully. But in the near term, W&T Offshore -- with its incredible margins, fast growth, and cheap price -- seems like a stronger buy.