Please ensure Javascript is enabled for purposes of website accessibility
Log In Help Join The Motley Fool
Free Article Join Over 1 Million Premium Members And Get More In-Depth Stock Guidance and Research
By Adam Levine-Weinberg – Sep 21, 2019 at 8:09AM

A multiyear mall redevelopment in the heart of Philadelphia is finally wrapping up, as Fashion District Philadelphia opened its doors this week.

In recent years, changing shopping trends and the growth of e-commerce have decimated the U.S. mall sector. Many malls have closed over the past decade, and an even greater number are trapped in death spirals and likely to close within the next five years or so. Meanwhile, hardly any new malls are under construction.

However, on Thursday, Macerich (MAC 0.00%) and Pennsylvania Real Estate Investment Trust (PEI 0.00%) celebrated the opening of Fashion District Philadelphia, an urban mall located in the heart of Philadelphia. This will serve as an important earnings catalyst for both REITs, which could in turn reenergize their moribund stocks.

A long-running redevelopment project is wrapping up

Fashion District Philadelphia isn't exactly a new mall. Instead, it is the result of a comprehensive multiyear redevelopment of a low-performing mall called the Gallery at Market East.

In mid-2014, Macerich bought a 50% interest in the Gallery from PREIT for $106.8 million. PREIT chose to bring in Macerich as a partner because of the latter's expertise at developing and managing multilevel urban retail properties. In April 2015, PREIT and Macerich announced a tentative agreement to pursue a two-year, $235 million renovation to turn the site into an urban outlet mall called Fashion Outlets of Philadelphia.

In the following years, the scope of the project would be enlarged, the construction timeline was pushed back several times, and the total amount invested ballooned to more than $400 million. And while outlet and factory stores will still comprise a meaningful proportion of the tenant roster, PREIT and Macerich have also added substantial dining, entertainment, fast-fashion, and full-price retail components to the mix. This prompted the name change to Fashion District Philadelphia. 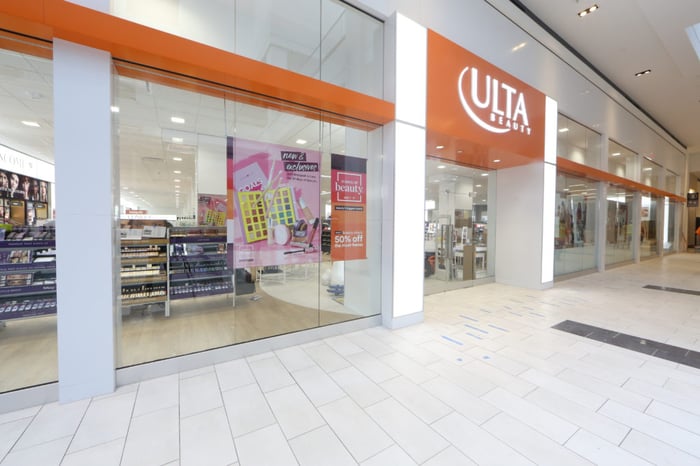 Ulta Beauty is one of the tenants that recently opened at Fashion District Philadelphia. Image source: PREIT.

PREIT and Macerich describe Fashion District Philadelphia as 90% committed. They recently confirmed roughly 70 tenants for the new mall. While the 800,000-square-foot development doesn't have any traditional department store anchors, it will feature several large-format tenants including off-price retailers Burlington and Century 21, DSW, a dine-and-recline AMC theater, a Round 1 bowling and amusement center, and a three-story flagship H&M.

However, the mall isn't opening all at once. In fact, nearly a third of the tenants on the list recently published by PREIT and Macerich were set to open sometime after the project's Sept. 19 grand opening. As a result, on Thursday (i.e., opening day), Fashion District Philadelphia was about 60% occupied.

Most of Fashion District Philadelphia's entertainment offerings will open later in the year, mainly in November. Another wave of new tenants -- including DSW and co-working space Industrious -- will open next spring, with still more following in the fall of 2020, at which point the mall will finally be considered "stabilized."

The income potential is significant -- especially for PREIT

Fashion District Philadelphia has already been generating a modest amount of income, because the Burlington and Century 21 stores have been open during the ongoing construction. Earlier this year, PREIT projected that the opening of the mall interior in September would boost its 2019 net operating income (NOI) by about $0.6 million.

That's a pretty negligible figure, due to costs related to the grand opening and the mall's low occupancy rate right now. By contrast, on PREIT's most recent earnings call, CEO Joseph Coradino said that Fashion District Philadelphia was on track to generate $18 million of NOI annually for each of the two partners by 2021, when it will be fully stabilized. That could be an increase of about $15 million from 2019.

For PREIT, which is on track to produce NOI between $230 million and $233 million this year, excluding lease termination fees, this will drive solid NOI growth over the next two years. That would be a welcome change after several years of declining NOI. Fashion District Philadelphia isn't nearly as important to Macerich, which currently produces about $900 million of NOI annually. Nevertheless, the extra income will be helpful in this case, too -- Macerich has also reported declining NOI in recent years.

Both Macerich and PREIT are fundamentally healthy companies. Their recent NOI declines have been driven primarily by moves to sell (or otherwise get rid of) lower-performing assets. That hasn't pacified investors, though. Macerich shares have plunged 60% over the past three years, and PREIT stock has fallen even further. An NOI boost from Fashion District Philadelphia could be just what's needed to win investors back.