The cannabis products supplier and retailer is looking to make its mark with more storefronts.

As acceptance of the cannabis compound cannabidiol (CBD) spreads, more retailers are adding it to their store shelves. Whole Foods Market, for example, just announced it was adding CBD products in 13 new states, bringing its total to over 350 locations in 30 states.

Although you can find CBD in all sorts of places you wouldn't normally think to look, like Kroger supermarkets and Designer Brands DSW shoe stores, more often than not CBD products will be in places you would consider, like vape shops. And that's because Greenlane (GNLN 1.75%) is one of the world's largest distributors of cannabis accessories with over 5,000 stock-keeping units (SKUs) with access to more than 11,000 retail stores.

And Greenlane is expanding its own retail footprint, having just signed two deals that could see its branded brick-and-mortar presence grow further. 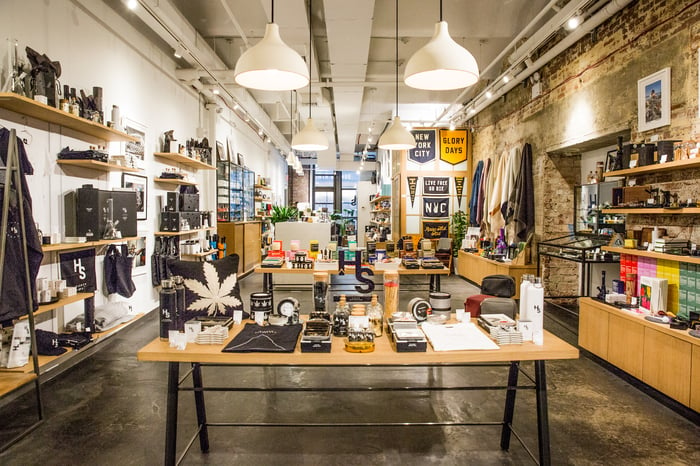 A campaign for Higher Standards

In the U.S., Greenlane operates two flagship stores under its Higher Standards banner, one in the New York City's Chelsea Market, the other in Atlanta's Ponce City Market that opened earlier this year. In addition, it operates several store-in-store Higher Standards boutiques in Los Angeles and Santa Ana, Calif.

Investors should see that number increase. The cannabis accessories retailer announced it had signed a tenant representation agreement with Jamestown, a real estate investment and management company, "for the strategic North American expansion of its Higher Standards stores," according to the announcement.

It was Jamestown that advised Greenlane on its two flagship locations, and Greenlane wants to have four operating in North America by the end of the year, and then continue expanding here and abroad.

Greenlane is moving ahead fast on the international front, announcing a second partnership to grow its retail presence by introducing the Higher Standards store-in-store boutique to four locations in Europe inside the high-end Nous concept stores.

Nous is a luxury retailer featuring a curated selection of clothes, accessories, watches, art, and books, and now Higher Standards will be included as well. Stores in Paris; St-Tropez, France; and Geneva will be the first to house the vape shop, but more locations throughout Europe are planned.

The two biggest risks for Greenlane, at least for U.S. expansion, is the often contradictory status of cannabis accessories with varying regulatory agencies at the federal and state level, along with the growing crackdown on vaping.

For example, the Food and Drug Administration, the Drug Enforcement Administration, and various state governments all have different views on CBD oil. Despite the legalization of hemp, CBD oil is still in a state of limbo because the FDA approved a drug using it as a compound, which severely limits or -- many times -- prohibits it being sold or used in other products. Some manufacturers have been sent warning letters by the FDA, others continue to fly under the radar.

Then there is the rising incidence of serious illness and even death from vaping. The FDA still doesn't know what's causing the problem, but it just launched a criminal probe into the matter, and one of the common attributes of the cases is the people had been vaping THC and nicotine, though not in all instances as just regular electronic cigarettes with nicotine alone were vaped. Users can expect the industry to face some strict oversight as a result of the investigation.

Greenlane, as the leading cannabis-oriented vape shop, along with others like Kushco Holdings may feel the impact more than others. The greater acceptance of legal marijuana and its derivatives have been a boon to Greenlane here and abroad. Its retail expansion plans indicate it sees a lot more opportunity than risk by growing.