These best-in-class stocks all owe a particularly big debt to Germany and should continue to be long-term winners.

Oktoberfest, the German festival that celebrates Bavarian culture, began on Saturday, Sept. 21. The event -- which originated in the southern German city of Munich in 1810 and is now a worldwide phenomenon -- runs through Oct. 6.

Along with visions of flowing beer, with aromas of pretzels and sausages seemingly wafting around me and accordion-heavy sounds of German folk music virtually streaming to my brain, I had this thought when I saw an image of an Oktoberfest pretzel: Pretzels aren't only tasty but also have been a giant moneymaker for a certain snack food company. So in the spirit of the annual celebration, I thought it would be fun to write about some top stocks that owe a particularly big debt to Germany.

Putting proverbial pen to virtual paper (and without Germany's Johannes Gutenberg, who invented the printing press, who knows how the written word would now be widely disseminated?), here we go... 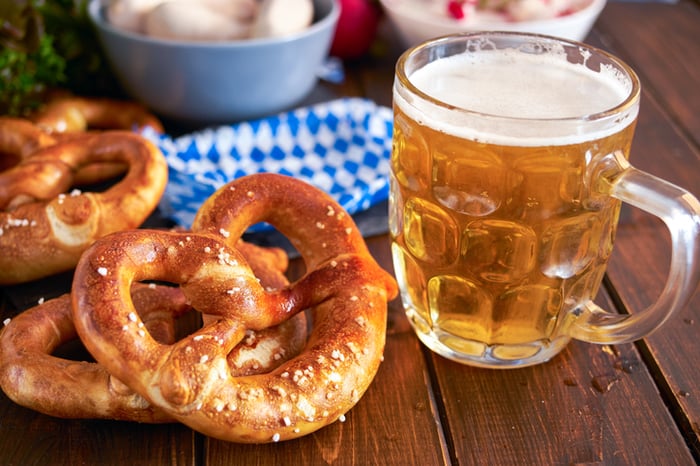 American Water Works is the largest publicly owned water and wastewater utility in the United States. It has regulated operations in 16 states and a presence in 47 states and one Canadian province. The New Jersey-based company's size and industry-leading geographic diversity give it a major advantage when it comes to making acquisitions.

American Water Works has a direct and recent connection to Germany: It was owned for five years by that country's electric utility giant RWE Group, which divested it in 2008 via an initial public offering (IPO) on the New York Stock Exchange (NYSE). So U.S. investors have Germany to thank for their ability to buy shares of this fantastically performing utility stock. Moreover, American Water Works might have a second strong link to Deutschland. The company was founded in 1886 by James S. and W.S. Kuhn, who hailed from Pennsylvania. Based on their surname, it would seem there's a good chance these brothers were of German ancestry.

J&J Snack Foods produces niche snack foods and frozen beverages, including Superpretzel soft pretzels and Icee frozen beverages -- both of which are hugely popular in the mid-Atlantic region surrounding the company's Philadelphia-area headquarters. It sells its products to retailers and food-service companies.

With a market cap of just $3.6 billion, it makes some sense that J&J Snack Foods seems to fly under the radar of many investors. That said, it's also a bit surprising, as this stock has been a star. As the chart shows, over the last decade, it's crushed the broader market's performance and has performed nearly as well as Disney stock. Moreover, its 20-year performance is jaw dropping for a food stock: It's outperformed the market by 9 to 1.

While Disney's long-term future looks bright, investors might have to be patient. Along with having to digest its recent massive Fox acquisition, Disney is investing aggressively in its nascent streaming business. This business is comprised of its sports-focused ESPN+, which launched in April 2018, and its broader Disney+ service, which is slated to roll out in November. Its top-notch brands should make its services very competitive with streaming leader Netflix's offerings. The company's transitional status is why Wall Street analysts are modeling for its earnings per share to decline an average of 2.5% per year over the next five years.

Disney has many connections to Germany, including that founder Walt Disney had German ancestry on his mother's side. Additionally, Ub Iwerks, who was the co-creator of Mickey Mouse and the animator behind many of Disney's early characters, was the son of a German immigrant. He also created the first cartoon, Fiddlesticks, that combined complete sound and color, setting the standard for the animation industry.