Please ensure Javascript is enabled for purposes of website accessibility
Log In Help Join The Motley Fool
Free Article Join Over 1 Million Premium Members And Get More In-Depth Stock Guidance and Research
By Brian Stoffel - Sep 23, 2019 at 9:47AM

You'd probably make more by investing the money, but it's still not worth it. Here's why.

Nothing is less sexy than an emergency fund. Save up enough money to cover your basic expenses for three-to-six months. Put that money in the safest place possible -- like a money market account. And then let it sit there.

Over time, it will lose value due to inflation. You'll have to put more in if your household grows. And there are opportunity costs: The longer the fund sits there, the more potential money you've missing out on because it wasn't invested in the stock market.

And yet, this seemingly wasteful decision will still be a life saver -- if not for you, than for your children and grandchildren. See why below.

Lessons from your appendix

For a long time, it was seen as an anomaly. We don't need it for anything, and it can be a nuisance. Hell, a burst appendix robbed the world of Harry Houdini and Brigham Young before their times had come. That's why doctors don't waste a second thoughts taking them out when they become inflamed.

Recently, however, the utility of the appendix has come into clearer focus. Specifically, some researchers now believe it stores beneficial bacteria. It can be used in the rare-but-life-saving instances where the gut needs to be repopulated with such bacteria following trauma -- like food poisoning.

Just as miners in the California Gold Rush would guard a live sourdough yeast 'starter' in a pouch around their necks, the body has its own pouch to preserve something valuable. Research later showed that individuals whose appendix had been removed were four times more likely to suffer from...an infection of the colon.

Your emergency fund is your appendix

Your emergency fund is your appendix -- or, as Sutherland put it, your sourdough starter pouch. It's something that likely won't be needed, but if it is, it will save your life.

Even here at the Motley Fool, I have very intelligent colleagues who argue that emergency funds don't need to sit around as cash. I understand their point of view, and the logic behind their reasoning is sound, but I still find the argument flawed. Famed trader and author Nassim Taleb made this point when I interviewed him last year:

What does an "uncle point" mean? It means any confluence of events that causes to you to raise the white flag and give up on investing. This could include:

The financial health of future generations is on the line

"But that's ridiculous," you might say. "I can't go around worrying every day about the worst possible scenario happening. What are the chances of all those things happening to me in my life?"

Let's unpack this reasoning a bit. Let's say the chance of any of these major "uncle points" occurring during any given year is one-in-one-thousand -- or a 0.1% chance. Note that this is just for illustrative purposes; there's no way to know the real probability of reaching an uncle point. That means there's a 99.9% chance that you'd be better off investing money for the long run in the stock market than you would keeping it as emergency savings this year.

But let's also say that you have 70 years left in your life. What's the chance of you never having an "uncle point" when an emergency fund will be the only thing to save you? To figure this out, we multiple 99.9% by 99.9% 70 times.

The result: there's a 6.8% chance an "uncle point" moment could wipe you out. Are you willing to trade in your emergency fund for a one-in-sixteen chance of getting wiped out?

Let's take it a step further. Let's assume that your three kids adopt a no-emergency-savings approach just like you do (in this way, it mimics the heredity of an appendix, passed on to future generations). They each have 70 years as wage-earning adults to navigate such "uncle points". 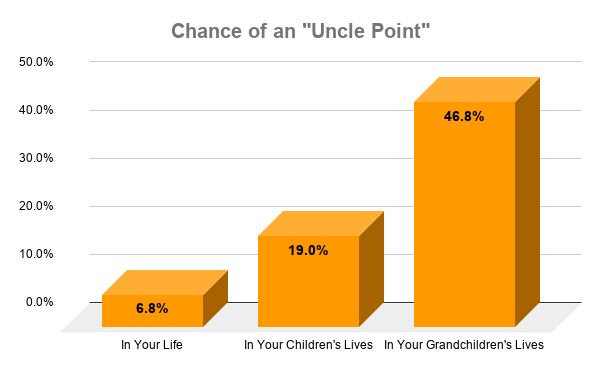 Chart by author. Percentages hypothetical based on 99.9% annual chance of not having an "Uncle Point" occurrence.

Trade optimization for peace of mind

Hopefully, this makes it clear that an emergency fund is necessary. But let's also play out what this will likely feel like in the real world: Year after year, your money will sit there in the bank, and you won't need it. Peers who think differently will invest that same amount of money and make lots more money because of it. You might feel a little left behind.

While you'll obviously still be investing what you can, this trend could continue for decades, or even a half-century. But because of the disciplined practice you've put into place, when an "uncle point" does arrive, you and/or your descendants won't miss a beat.

Just as important, now that you've acknowledged the future is unknowable, you can sleep easy at night knowing you're as prepared for the unexpected as you can be. That's a worthy trade-off for unnecessary optimization of all your cash.