Tinder owner Match Group (NASDAQ:MTCH) is launching a video series on the dating site to help serve as a conversation icebreaker to get people who have nothing to say to one another to open up about how they interacted with the content and, ultimately, about themselves.

They're calling it Swipe Night, a four-episode, choose-your-own-adventure mini-series where viewers direct the action of characters in a post-apocalyptic future, the results of which will be listed on your profile. So, after swiping right on someone you want to connect with, you'll presumably have something to talk about. 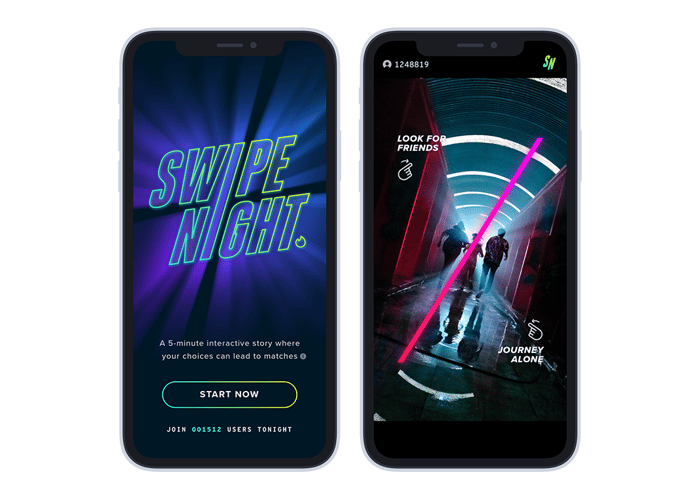 The videos will be shot to be seen in vertical format for mobile devices, but won't be about the app or dating per se. Rather the relationships of characters trying to survive a five-minute, end-of-the-world scenario will be the focus, but viewers get to make decisions for them, both practical and critical, with only seven seconds to choose a course of action. Think of it as Black Mirror: Bandersnatch for the Gen Z dating scene.

The programs will be on once a week beginning in early October.

A Tinder blog post says, "Swipe Night brings responsive, streaming video to Tinder for the first time. But more important than its technical innovation, it offers a new way to use content to start conversations." That's because beyond the critical choices you make being added to your profile, they will also play a role in determining who you're matched with. Knowing what someone did (or didn't do) will presumably allow potential dates to gain insight into you as a person or at least allow them to ask why you acted the way you did.

While it might seem like some pretty thin gruel to use to encourage more interaction with the app, it's likely the technology behind the scenes that plugs your decisions into an algorithm where the value in the effort lies.

Creating content to generate a connection between people -- hopefully, more than matching people up who would allow a similar character to die -- will be important in appealing to Tinder's user base, which is predominantly under 25 years old and is already comfortable with and fluent in interacting with content. Says Tinder, "We can't think of a better way to break the ice than over emojis and the apocalypse."

There's certainly no shortage of competition for user attention and video content, particularly on mobile platforms. Facebook Watch, Instagram IGTV, and Snap Originals are just some of the social media platforms that have gotten into original programming, and there will be more streaming video coming to market soon with the launch by Apple and Disney of their own branded streaming platforms.

Match may also be keeping watch on Facebook Dating, the dating app service the social media giant just launched, though it has long contended it doesn't view Facebook as a competitive threat.

While streaming platforms are spending billions of dollars to acquire new content, it's estimated Match spent $5 million on the series, not an inconsiderable sum considering the experimental nature of the project.

Tinder, of course, is Match Group's primary growth vehicle, accounting for most of the 18% increase in revenue last quarter for its parent, which hit almost $500 million, and the 15% increase in operating profits.

This also isn't Match's first venture into creating alternative content for its dating site, having previously launched the dating and relationship lifestyle site Swipe Life, which offers original articles and videos that give advice on dating, entertainment, food and drink, and more.

Embedding content into the app, making it interactive, and using the information gleaned to inform decisions on pairing potential couples is a step up and one that Match intends to grow, assuming the current crop of content is well received.