Amazon announced a new corporate plan to meet a goal of the Paris climate accord ten years before the deadline.

That's ten years sooner than the goal of the historic Paris climate accord signed in 2015. In 2017 President Donald Trump backed out of the accord, causing much consternation around the globe.

"We're done being in the middle of the herd on this issue -- we've decided to use our size and scale to make a difference," said Jeff Bezos, Amazon founder and CEO, in a press release. "If a company with as much physical infrastructure as Amazon -- which delivers more than 10 billion items a year -- can meet the Paris Agreement 10 years early, then any company can."

New industries will be created to meet the Paris Agreement goals

Amazon said that signatories to its Climate Pledge, by agreeing to pick up the pace of decarbonizing, will help drive the development of low-carbon products and services necessary for companies to meet the pledge.

Amazon pointed to its plan for electric delivery trucks as one example. It recently invested $440 million in Rivian, the Detroit electric-truck start-up, to accelerate the production of electric vehicles. Amazon plans to have 10,000 of the new EVs on the road by 2022, with all 100,000 on the road by 2030; this will save 4 million metric tons of carbon per year by 2030. In February, the e-commerce giant announced it intends to have half of its shipments carbon-neutral by 2030. 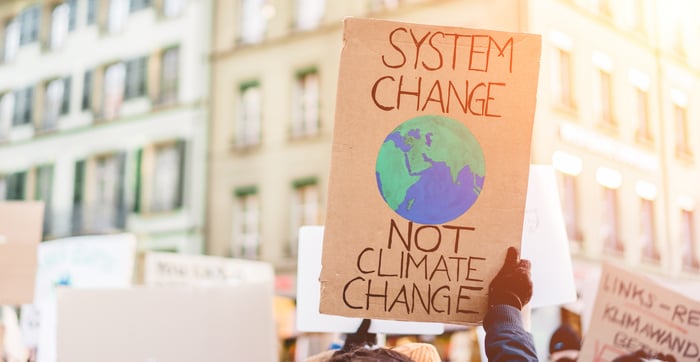 Amazon faces calls from employees to do more

The efforts on the part of Amazon come amid calls from employees, investors, and customers to do more to reduce its carbon footprint. After all, with net sales of $232.9 billion last year, Amazon is using a lot of resources to get all those packages into the homes of its customers.

At its annual shareholder meeting in May, thousands of employees backed a proposal calling on the e-commerce giant to create a comprehensive climate-change plan. It came on the heels of accusations by employees that Amazon donates to legislators and lobbyists who deny climate change. Though the proposal failed at the meeting, Amazon responded with the Climate Pledge.

The new plan also coincided with climate-change protests scheduled around the world. Amazon Employees for Climate Justice had said they would walk off the job to protest, marking the first strike in Amazon's history. The group called Amazon's Climate Pledge a "huge step forward," but said more needs to be done.

"With over 1,500 Amazon and 700 Google tech workers pledging to walk out in support of the youth-led Global Climate Strike, Amazon's newly announced "Climate Pledge" proves that collective action and employee pressure works," the group wrote on Twitter. "As long as Amazon uses its power to help oil and gas companies discover and extract more fossil fuel, donates to climate-denying politicians and think tanks and enables the oppression of climate refugees, employees will keep raising our voices."

During a speech at the National Press Club in Washington, D.C., Bezos reportedly said he supported the global strike for climate change, and that Amazon is looking into its campaign contributions to see if they include any to active climate deniers.

While Amazon's Climate Pledge was well-received by environmental groups and employees, it did little to lift the stock, even as investors are calling on governments and corporate America to do more to slow the warming of the planet.

Earlier this week, 477 investors representing more than $34 trillion in assets issued an open letter urging governments and companies to do more to meet the Paris Agreement, which calls for keeping global average temperature increases less than 2 degrees Celsius. "The countries and companies that lead in implementing the Paris Agreement and enacting strong climate and low carbon energy policies will see significant economic benefits and attract increased investment that will create jobs in industries of the future," the group wrote.

Initially, Amazon's stock got a little bump from its Climate Pledge announcement. But shares are now trading lower as investors, at least for now, focus more on sales than on saving the planet.