Sales growth and profits have been hard to come by when it comes to marijuana stocks in Canada. While rising sales may be the norm, a strong bottom line isn't always.

However, one company looks to break that trend. The Supreme Cannabis Company (OTC:SPRWF) recently released its quarterly results, showing investors both significant sales growth and a strong bottom line.

Supreme Cannabis announced last week that its fourth-quarter results were the first in which the company finished in the black. An adjusted EBITDA (earnings before interest, taxes, depreciation, and amortization) figure of 3.2 million Canadian dollars was a big improvement from the prior year, when the company reported a loss of CA$1.6 million. And as impressive as that was, what may have been even more surprising is that Supreme Cannabis was able to achieve that while growing its sales by 436%, reaching CA$19 million this past quarter.

The company credits 7ACRES, its recreational flower brand, for the growth. Its focus on premium cannabis products has allowed it to generate high margins, and that's been key to covering its overhead. For the full year, production-related costs were just 49% of net revenue, allowing more than half of incremental revenue to trickle through and help cover operating expenses. That's great for investors, especially given that Supreme Cannabis expects sales to continue to rise. 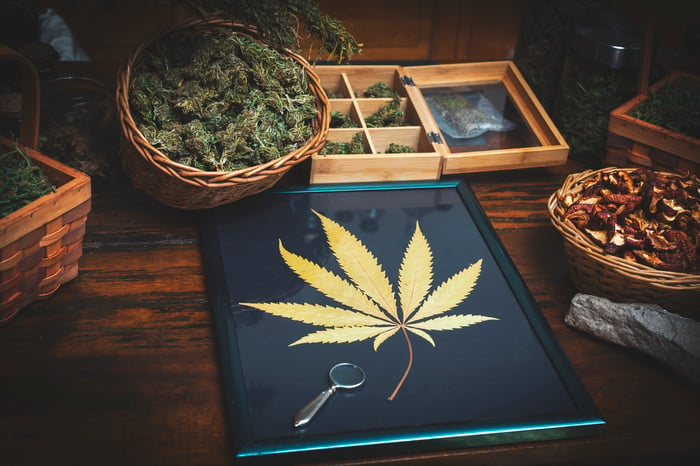 Even more growth on the way

The retail pot market is just starting to take off in Canada, and Supreme Cannabis is expecting much bigger things in fiscal 2020, when it forecasts net revenue will come in between CA$150 million and CA$180 million. This past fiscal year, the company generated CA$41 million in sales.

One of the big growth opportunities for the company is in vaping; in the Cannabis 2.0 wave in Canada, more products will be sold to consumers. And with Supreme Cannabis partnering with PAX Labs, a market leader in vaping products, the company is well-positioned for success in that segment of the industry.

It's not hard to see why this Supreme Cannabis accomplishment is important. Rival Canopy Growth (NASDAQ:CGC) has suffered significantly over the past several months, seeing its valuation take a beating, largely due to underwhelming financial results. While that company has achieved significant sales, its poor bottom line has led to significant changes, including the departure of Canopy's CEO Bruce Linton.

Profitability and cash flow are important to ensure that a company can continue growing. Without them, it would need to take on debt or dilute shareholders with new equity issues; neither option is particularly attractive to investors. The more that Supreme Cannabis can build on these results and improve on its bottom line, the stronger its cash flow will be -- putting it in a great position to grow.

At a market cap of around $350 million, Supreme Cannabis could have a lot of upside. It's a stock that cannabis investors will want to keep a close eye on, to see if it can keep producing impressive results.