Please ensure Javascript is enabled for purposes of website accessibility
Log In Help Join The Motley Fool
Free Article Join Over 1 Million Premium Members And Get More In-Depth Stock Guidance and Research
By Jeremy Bowman – Updated Sep 24, 2019 at 7:28AM

Going all-in on cross-regional transactions, the used car dealer did a reset in July.

It's been a rocky 15 months for Uxin (UXIN 3.58%) since the Chinese online used-car dealer went public.

The company already announced one major change in its business model at the end of last year, saying it would downplay its "2B" dealer-focused, auction-based business by removing certain services like inspections, a move that has since led to a sharp decline in revenue from that segment.

In July, Uxin said it was divesting its loan facilitation business in a deal with Golden Pacer, a Chinese financial technology platform. As a result of that move, Uxin's second-quarter results were delayed by a month as the company has had to adjust its financial statements. When the report finally came out on Monday, it became clear that Uxin's business had taken a step back in a sense, as revenue had fallen due to the divestitures, which will include its entire intra-regional business, which had been the greatest source of its revenue.

Investors were unhappy with the results, sending the stock down 15.6%. Let's take a closer look at the numbers from the quarter past. 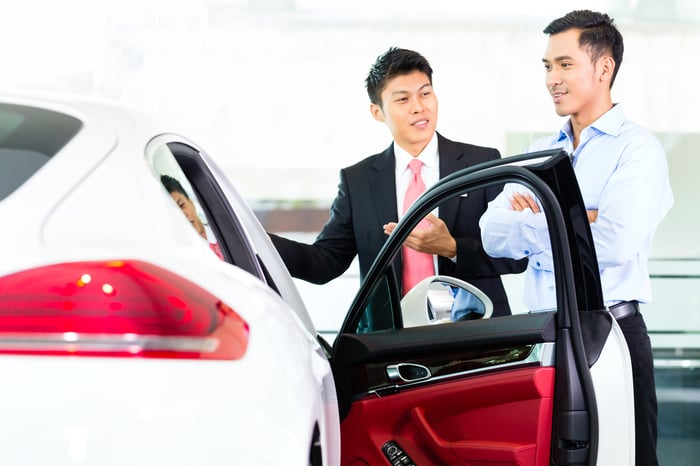 It was a busy quarter as the Golden Pacer transaction rendered any financial comparison from the previous year almost moot. Presenting its financial results on an organic basis (meaning it strips out the effect of the divestitures), overall revenue actually jumped 58.3%, keeping pace with its revenue growth from the earlier quarter. The "2C" consumer-focused segment now only includes fast-growing cross-regional transactions, which the company said increased 500% to 24,585. That drove revenue in the category up 11 times higher than a year ago to $46.4 million.

Separately, on Sept. 16, after the second quarter ended, Uxin announced that its COO, William Peng, was stepping down to pursue other business interests. It also said CEO Kun Dai would oversee the company's business operations.

Dai touted the company's transition plan, saying: "We continued to see robust momentum in our online used-car transaction volume with a 500% year-over-year increase to over 24,500 used cars in the quarter. This not only reflects the growing traction of our one-stop online used-car-buying product and service offerings, but also demonstrates consumers' increasing acceptance of buying used cars online from us without actually seeing the car in person when they make the purchase decision."

He added: "The proposed transaction with Golden Pacer enables us to entirely concentrate on fulfilling online used-car transactions. With our 2C business model evolving into a pure play and through our innovative used car supply chain, we are better positioned to capture the market opportunities brought by the accelerating trend of buying used cars online."

In its guidance, the company called for revenue of 440 million to 460 million yuan in the third quarter, or the equivalent of $61.8 million to $64.6 million, which is on par with results in the second quarter.  That compares with $125.5 million in revenue in the third quarter of 2018, though on an adjusted basis that forecast still calls for strong top-line growth.

Management is clearly confident in the new business model, saying it will deliver increased profitability, but after so many changes in such a short period of time, it's up to Uxin to prove the wisdom of the latest strategic shift.