Please ensure Javascript is enabled for purposes of website accessibility
Log In Help Join The Motley Fool
Free Article Join Over 1 Million Premium Members And Get More In-Depth Stock Guidance and Research
By Brian Feroldi - Sep 24, 2019 at 10:46AM

In response to its releasing fiscal 2020 second-quarter earnings, shares of BlackBerry (BB -3.48%), a provider of enterprise software and services, had dropped 18% as of 10:22 a.m. EST on Tuesday. 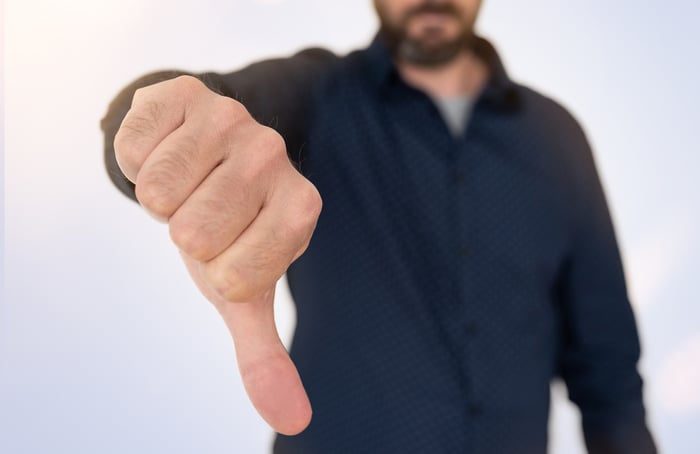 CEO John Chen stated that he was pleased with the company's execution during the quarter: "We achieved break-even non-GAAP earnings per share and generated free cash flow even with increased investments in sales and product development to support future growth. We are encouraged by the positive reception on BlackBerry Intelligent Security, and we have a number of exciting new product launches in the next six months."

As for guidance, management now believes that non-GAAP revenue will grow 23% to 25% for the full fiscal year. That sounds good on the surface, but management was previously guiding for full-year revenue growth of 23% to 27%, so this update can be viewed as disappointing. For context, Wall Street was expecting revenue growth of 23.4% for the full year.

Traders appear to be selling off the stock in response to the quarterly top-line miss and guidance revision.

BlackBerry is currently trading at a multiyear low, which suggests that Wall Street doesn't believe this company has a bright future. However, a deeper view of the business shows that investors have reasons to be optimistic. The vast majority of revenue now comes from software and services sales, which are growing, high margin, and recurring in nature. Management is also making investments in the business to drive its next phase of growth.

Offsetting that potential is that fact that BlackBerry has been a horrific stock to hold for the last 10 years -- shares have lost 92% of their value over the last decade -- and the company's name is still associated with its obsolete phone business. The onus is still on management to prove that the "new" BlackBerry is a much stronger and better business than ever before, and lowered guidance and a mixed earnings report aren't helping to change Wall Street's opinion of this business today.

Should You Buy These 3 Hot Reddit Stocks Before It's Too Late?

From the Ashes of Mobile, Blackberry's Unlikely Comeback