Please ensure Javascript is enabled for purposes of website accessibility
Free Article Join Over 1 Million Premium Members And Get More In-Depth Stock Guidance and Research
By Beth McKenna - Sep 25, 2019 at 9:23AM

Water utility giant American Water Works ( AWK -0.46% ) held an earnings call last month following the release of solid second-quarter results in which both its revenue and its earnings per share adjusted for one-time items jumped 13.3% year over year.

Management's comments during such calls can often reveal key insights about a company's business performance, prospects, and strategy. Below are three things management shared on the Q2 call that investors should know. 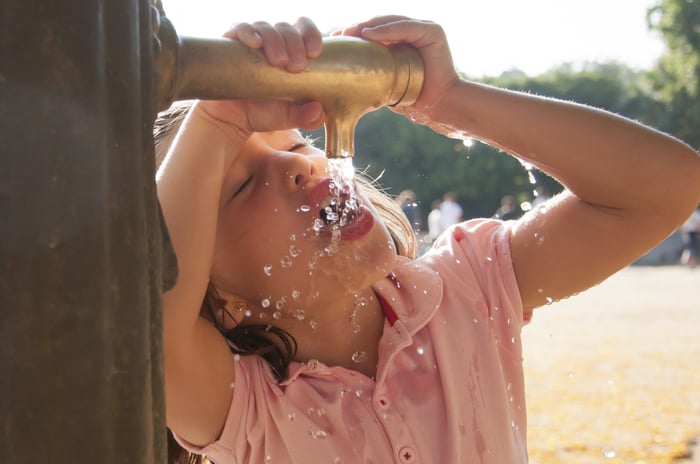 1. New Jersey's actions on PFAS contaminants have resulted in an increase in privatization talks

Here's an excerpt from COO Walter Lynch's remarks to an analyst who asked if New Jersey's recent proposal to regulate the level of two types of PFAS (perfluoroalkyl and polyfluoroalkyl substances) permitted to be in the state's drinking water supplies has resulted in "an uptick in privatization chatter with municipalities":

And the answer is, I'd say, yes. ... A lot of the municipal leaders are looking for options, and we're in discussions with them about sharing our expertise and buying their systems and integrating what they do every day into what we do every day. So I think it has contributed to more discussions with municipalities as they face these challenges.

As background, PFAS are a group of synthetic chemicals that include perfluorooctanoic acid (PFOA) and perfluorooctane sulfonate (PFOS), both of which have been found to have contaminated the drinking water supply across much of the country, largely surrounding military bases and industrial sites. These toxic chemicals are very problematic because they stay in the environment and the human body for a very long time and have been linked to a host of serious health issues, including cancer.

Since the EPA has not regulated PFAS, several states have proposed maximum contamination levels (MCLs) of these chemicals in their drinking water supplies. In April the New Jersey Department of Environmental Protection (DEP) proposed a MCL of 14 parts per trillion (ppt) for PFOA and 13 ppt for PFOS. Most municipalities that own and operate their own water systems reportedly don't have the capability to remove PFAS, hence the increase in acquisition talks Lynch noted.

Adjusted earnings were up 13.3% compared to last year despite the wet weather I just mentioned. As a reminder, weather impacts typically occur in the third quarter, but the historical rains and flood in the second quarter resulted in a $0.05 quarter-over-quarter difference.

Bottom-line results were particularly impressive given that much of the company's service areas in the Midwest and Northeast experienced record-breaking wet weather in the quarter. In fact, "The National Oceanic and Atmospheric Administration reported that the past 12 months in the United States have been the wettest on record, and that 2019 had the most rain since records began 124 years ago," as Lynch added.

3. Another one of the company's states approved an infrastructure program charge

The Kentucky Public Service Commission also approved the implementation of a qualified infrastructure program charge that will allow the company to replace aging pipes as well as other assets while reducing regulatory lag.

Kentucky is American Water's ninth state -- of the 16 states in which it has regulated operations -- with an infrastructure surcharge mechanism in place. In short, being permitted to tack on such surcharges to customers' water bills enables water utilities to more quickly upgrade infrastructure.

Is It Too Late to Buy American Water Works?

Why American Water Works Is a Retiree's Dream Stock