Just over half of Americans (51%) believe they will be wealthy one day, according to a new survey conducted by MagnifyMoney. That's a particularly stunning number when you consider that the average American thinks you need $2.27 million to be considered wealthy.

It's also quite a leap of faith to be confident in your eventual wealth when the median household worth for Americans over the age of 75 (the wealthiest age group) is only $264,800 -- meaning half of those households have less. Even the average net worth of that age group -- a number pulled higher by the extremely wealthy people on the top of the scale -- comes in a $1,067,000, not even half of what is viewed as wealthy. 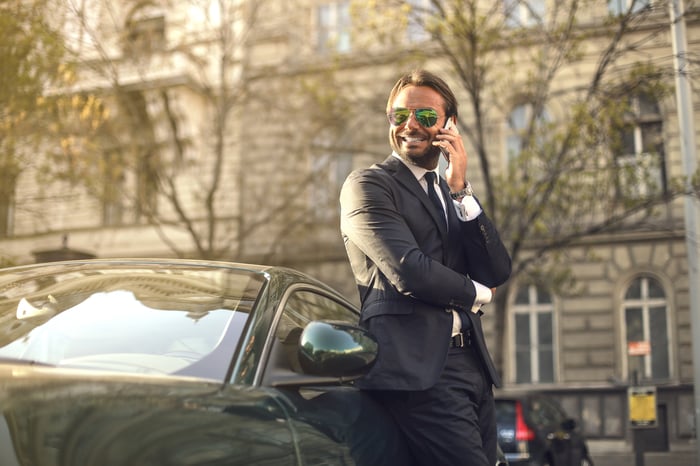 What this guy considers "wealthy "may not match your definition of financial success. Image source: Getty Images.

Perhaps unsurprisingly, experience does a number on this financial optimism: While 66% of millennials surveyed still see wealth in their futures, only 25% of Baby Boomers do -- likely because they understand that if they are not already well on their way to rich (or there already), they probably won't get there.

There was a lack of clear consensus across the pool of respondents about what the best way to accumulate wealth is. Real estate was the top answer, named by 28%, while the stock market came in second at 19%.

Whatever a person believes about their future prosperity, they're unlikely to wind up wealthy if they don't take some coordinated steps to make it happen.

"Unfortunately, 23% of Americans currently are not doing anything to build wealth," wrote Jacqueline DeMarco for MagnifyMoney. "On the bright side, 36% are saving for retirement and 29% are investing in the stock market."

There is, of course, some wiggle room here: The MagnifyMoney survey didn't define what being wealthy means, so respondents may not have had a specific monetary value in mind.

"About 55% of Americans reported believing that being wealthy ultimately means having the ability to live comfortably without concern for their finances. Meanwhile, 43% defined it as feeling financially secure," wrote DeMarco.

That's a somewhat encouraging set of figures, because a hard worker who plans for their future has a fair shot at achieving financial independence. That may not mean "wealth" in the traditional sense, but for most of us, getting to the point where we can live our lives without having to worry about money would be victory enough on the financial front.

The sooner you start, the easier it will be to make that happen. You don't have to earn a lot of money to eventually achieve financial independence, but you do have to have a plan and the discipline to see it through.

If one of your dreams is to someday stop having to worry about money, start working toward it now. Evaluate your finances, and get trustworthy professional help with crafting your retirement plan. And most important, prioritize long-term security over short-term wants. That's not always easy, but it's a path most people can follow that will eventually pay off.