When configured with 200 seats, the Airbus A321neo will drive meaningful unit cost reductions for JetBlue.

Over the next decade, the A321neo -- including the longer-range A321LR and A321XLR variants -- will become the backbone of JetBlue's fleet. As it does, the state-of-the-art jet should transform JetBlue's cost structure, helping the carrier to expand its profit margin and post strong earnings growth in the years ahead.

As recently as 2016, most of JetBlue's 2018 aircraft deliveries were supposed to be A321neos. However, changes to the carrier's fleet plan and production delays at Airbus and its suppliers led JetBlue to order additional A321s and push back its A321neo delivery schedule multiple times in the last few years.

Entering 2019, JetBlue was supposed to receive its first 13 A321neos from Airbus this year. However, by that point, it already knew that production bottlenecks would likely delay some of those deliveries into 2020. In late July, management said that Airbus now expects to deliver no more than six A321neos to JetBlue this year. Indeed, as of last week, JetBlue's first A321neo was still its only A321neo. 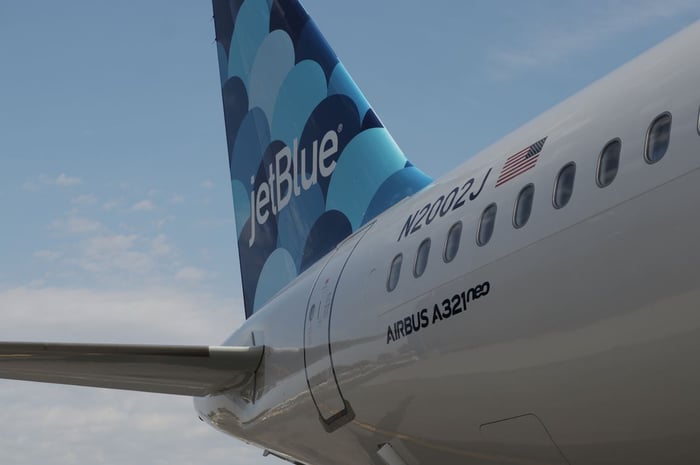 JetBlue has only received one A321neo so far. Image source: JetBlue Airways.

Airbus won't catch up on A321neo deliveries in 2020, either. JetBlue is supposed to receive 15 A321neos next year but will probably get no more than 14 (including the seven deliveries expected to shift from 2019 into 2020). At best, the delayed aircraft will arrive in 2021.

The A321neo will be a huge cost lever

JetBlue's first A321neo is configured in an all-coach 200-seat configuration. Indeed, the carrier seems likely to equip most of its A321neos with 200 seats, with the exception being the 13 A321LRs and 13 A321XLRs it has ordered to support service to Europe. By contrast, 35 of JetBlue's 63 prior-generation A321s are outfitted in its 159-seat Mint configuration for transcontinental service.

The 200-seat A321s have the lowest unit costs in JetBlue's fleet by far. Indeed, they don't cost much more to operate than the carrier's 162-seat Airbus A320s, which will be the most common aircraft in JetBlue's fleet when cabin renovations are completed in late 2020. The A321neo will build on the A321's cost advantages by offering a fuel efficiency improvement of up to 20%.

Indeed, the 200-seat A321neo's nonfuel unit costs will likely be at least 20% lower than JetBlue's current fleetwide average. The fuel efficiency gains will be even greater: somewhere in the range of 30% to 40%.

Under JetBlue's current fleet plan, the airline would have up to 59 200-seat A321neos by the end of 2024, with the vast majority arriving by the end of 2022. This would more than double the percentage of JetBlue's capacity supplied by 200-seat aircraft over the next five years, from 17% today. Thanks to the A321neo's rock-bottom unit costs, this would contribute to an enormous improvement in the airline's cost structure over that period.

Route development is a nice bonus

Cost efficiency isn't the only reason why JetBlue is excited about the A321neo. Superior fuel efficiency means that the aircraft has more range. JetBlue has already announced two new routes from New York to South America that will make use of this extra range. The A321LR and A321XLR variants were designed to extend the model's range even further. JetBlue has ordered both types in order to add new routes from New York and Boston to Europe that wouldn't be possible with its current fleet.

The enhanced capabilities of the A321neo and its derivatives will thus shape the development of JetBlue's route network in the coming years by opening up new growth opportunities. Understandably, these opportunities have captured the attention of investors and the public.

That said, the A321neo will have a big positive impact even when deployed within JetBlue's current route network. With much lower unit costs than the rest of the fleet, the Airbus A321neo -- along with another new jet from Airbus, the A220-300 -- will be critical to achieving management's goal of margin expansion in spite of a tough competitive environment.