The excuses keep changing like the waves, but Carnival (NYSE:CCL) (NYSE:CUK) just can't stop paring back its financial forecasts as fiscal 2019 plays out. For the third time in as many quarters, the world's leading cruise line operator is lowering its adjusted earnings guidance for the entire fiscal year.

Carnival is blaming weather-related voyage disruptions, a delayed ship delivery, and tensions percolating in the Arabian Gulf as factors that will weigh on its bottom line this year. The industry bellwether is also pointing to changes in fuel prices and exchange rates as eating away at its profitability this year, reversing the benefits it derived from favorable fuel costs in the fiscal third quarter that it announced on Thursday morning. Carnival's revising its 2019 profit slightly lower in the process, now expecting to post adjusted earnings per share between $4.23 and $4.27 this year. 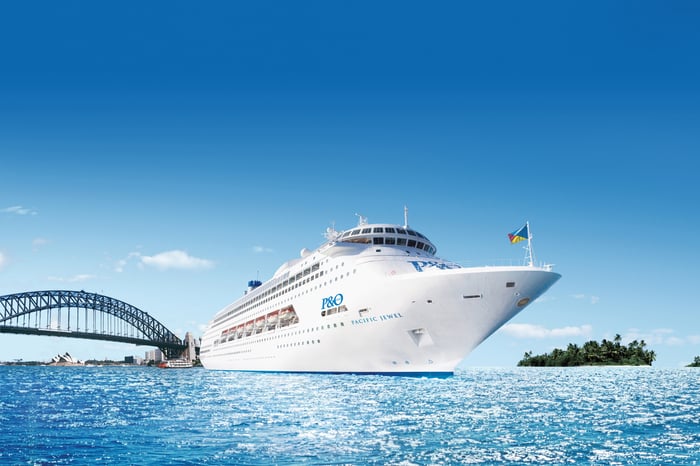 Into the quarter gallery

The weak outlook contributed to Carnival shares opening lower on Thursday, washing away what would have otherwise been a mixed but largely positive third quarter. Revenue rose 12% to $6.533 billion for the three months ending in August. Carnival has historically been a slow grower, but it has now rattled off double-digit top-line gains in five of the past seven quarters. New accounting guidance has helped prop up results, but even net cruise revenue climbed a respectable 5% for the quarter on a constant-currency basis.

Gross revenue yields is the metric that the industry watches as a gauge of health, tracking revenue per available lower-berth day. Gross revenue yields rose 5.6% for the third quarter but actually declined 0.5% on a constant-currency basis. Earnings per share climbed to $2.58 for the quarter from $2.41 a year earlier. But the gap widens once we back out the one-time swings that resulted in $39 million in net charges this time around and padded results with $34 million in net gains last time out.

Adjusted earnings per share of $2.63 are comfortably above the $2.36 it served up a year earlier. Its outlook in late June was calling for no more than an adjusted profit of $2.54 a share. As rough as it's been to see the stock meander under the pressure of dialed-back guidance, Carnival has actually found a way to exceed its conservative guidance in recent reports.

Several factors have held back results and guidance in earlier reports, including lower yields through Europe and Asia and the government's policy change on Cuba as a port of call. Carnival began modeling as much as $4.80 a share in adjusted earnings for fiscal 2019, and with a single period left, that ceiling now stands at $4.27 a share.

Carnival's initiated guidance for the fourth quarter isn't very encouraging. It sees net revenue yields on a constant-currency basis sliding 2% to 3% since the prior year. It sees adjusted earnings clocking in between $0.46 and $0.50 per share during the seasonally sleepy but still important fiscal fourth quarter, well below the $0.70 a share it served up a year earlier.

One silver lining is that the stock closing in on the three-year low it set late last month does push the yield north of 4.5% right now. There are a lot of things to consider before buying a dividend stock, but if you're buying into Carnival anyway, the dividend checks will provide some solace. The meatier silver lining is that cumulative advanced bookings for the first half of fiscal 2020 continue to run ahead of where they were for fiscal 2019 at this point last year. Booking volumes and prices have started to decline in recent months, but the longer-term snapshot remains healthy.