Forget General Motors and Ford -- electric-car maker Tesla (NASDAQ:TSLA) has another competitor to contend with: Rivian, the electric truck start-up.

The Detroit-based company is vying with Tesla in the race to bring electric trucks and SUVs to the market.

It has big backers that should worry Tesla. Just this month it raised $350 million in venture funding from Cox Automotive. As part of the deal, both companies will explore ways to team up, including in logistics and digital retailing.

Cox Automotive is just the latest to invest in a company that has already developed two electric adventure vehicles, the R1T truck and R1s SUV. Earlier this year, Rivian raised $700 million in funding led by Amazon, and in April, Ford invested $500 million in the company. With the investment from Cox, Rivian remains independent, but Cox Automotive gets a seat on the board.

The truck market in the U.S. is booming

Going after the U.S. truck market makes a lot of sense for traditional automobile makers and their electric-vehicle rivals, given the strong growth in that category. According to J.D. Power, 71% of new vehicles purchased are trucks, SUVs, or crossovers, leaving cars with just 30% of the market share. These trucks and SUVs typically cost more than their passenger-vehicle counterparts, which means higher average selling prices and better margins for the truck makers.

That hasn't been lost on Tesla. For months, Tesla CEO Elon Musk has been teasing the upcoming pickup truck on Twitter, describing the design as "cyberpunk." Musk said it should be ready for purchase in November and priced at no more than $49,000. "We don't want it to be expensive," Musk said in a recent podcast.  "It's got to stop at $49K or less."

Rivian has already developed two electric trucks geared more toward the true off-roader. The vehicles come with a hefty price tag of $69,000 for the truck and $61,000 for the SUV  -- and that's after a Federal tax credit. The R1T and the R1s pack a lot of technology and high-end features inside and out. Both Rivian and Tesla's trucks will get at least 400 miles on a single battery charge. Rivian's trucks are expected to hit the market in late 2020; the company has been accepting pre-orders with a refundable deposit of $1,000 since November. 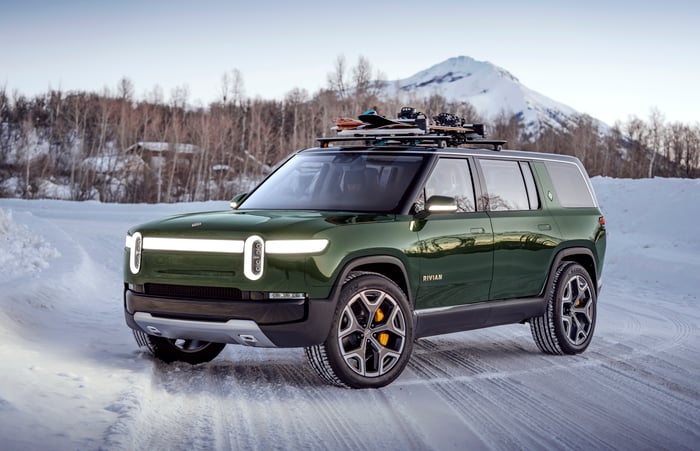 First to market could be the winner

Whoever enters the market first could have a lot of staying power, granted the electric trucks are capable of delivering on its promises. Rewind a few years, and the idea of a low-emissions truck, let alone an electric one, wasn't even a consideration. But with advances in technology and increased urgency on the part of consumers to save the planet, electric cars and now trucks are becoming a reality.

If experience is the basis for determining who will be the winner, Tesla has the edge over Rivian. It has been making and selling electric vehicles for years and has become a leader in the industry. For the first half of 2019, new electric-vehicle sales in California, the biggest market for electric and hybrid vehicles, increased 63.7% with 51,750 electric cars sold. Most of the growth was thanks to Tesla. It's Model 3s accounted for 33,000 of that total. The Chevrolet Bolt EV was a distant second with 4,482 vehicles sold. The Tesla Model X and the Tesla Model S were in third and fourth place, with the Nissan Leaf rounding out the top five electric vehicles. Tesla is the undisputed leader in the electric vehicle car market, commanding about 80% market share in the U.S.

Tesla may have the experience, but it's also prone to missteps. Tesla investors haven't forgotten the production delays and snafus that plagued the Model S, Model X, and Model 3. Any production missteps with its electric truck could lead to costly delays, not to mention pave the way for Rivian to steal its thunder. It doesn't help that Rivian has a lot of cash in its coffers and big-name backers including Amazon.