Over the past several years, British pharmaceutical giant GlaxoSmithKline (NYSE:GSK) has been struggling to compete against some of its peers in the big pharma space. Despite maintaining an impressive dividend for all these years, investors have started getting worried about Glaxo's mounting debt levels and its struggle to generate revenue between its various divisions. Amidst this uncertainty for the future, most analysts covering the stock currently have a neutral rating on the company, adopting a wait-and-see approach.

However, the past few months have seen a number of major changes and announcements that are highly promising. Let's take a look at some of these recent developments and see whether or not Glaxo might be worth buying now. 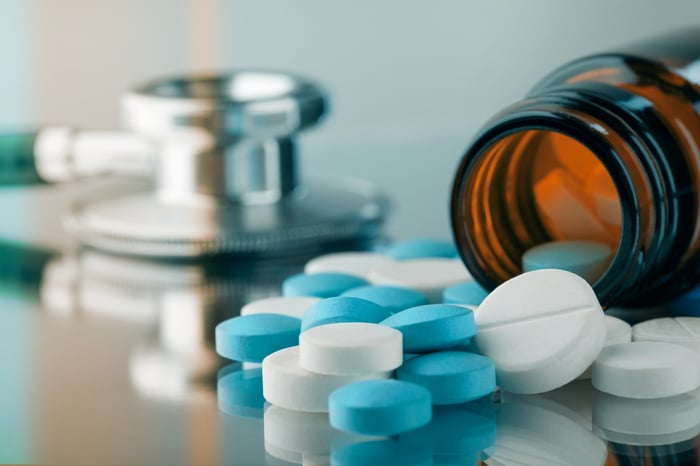 One major development for Glaxo is its recent announcement that its ovarian cancer drug candidate, Zejula, saw positive results in a phase 3 clinical study. The trial compared the effectiveness of Zejula to a placebo among a group of stage III or stage IV ovarian cancer patients. The primary endpoint of the study was to see if the drug could be used as a maintenance treatment to fend off further cancer progression in patients who had received one dose of chemotherapy. Glaxo confirmed that the patients who took Zejula saw a major improvement over their placebo counterparts.

While this is good news, it needs to be put into perspective in terms of what's going on with some of Glaxo's competitors. Lynparza, a drug candidate produced by a joint venture between Merck (NYSE:MRK) and AstraZeneca (NASDAQ:AZN), saw strong success in the fall of 2018 and would fill a similar role as Zejula. Jefferies analyst Peter Welford described Lynparza's results as "remarkable," reducing the risk of ovarian cancer progression by 70% in patients.

However, around 35% of patients have a specific deficiency that makes them unsuitable for treatment by Lynparza. Specifically, the Merck/AstraZeneca drug treats patients with germline BRCA mutations, but a significant portion of women with ovarian cancer don't have those mutations. For this group, Zejula could become the primary maintenance treatment option, and it would still be a significant success for GlaxoSmithKline in that case.

Glaxo also made news recently when it announced that it had seen positive results from a phase 3 clinical study in treating patients with HIV. The company had been developing an injectable HIV therapy using two drugs, rilpivirine and cabotegravir. While the drugs are supposed to be injected once a month, the clinical study was meant to see how effective this drug combination would be if taken only once every two months instead.

Results showed that there was no difference in results for the group that took the therapy once every two months with a stronger dose rather than once every month with a weaker dose. Glaxo had initially applied for U.S. Food and Drug Administration approval under a once-per-month dose schedule, but this success will likely lead to an updated filing for the once-per-two-month treatment option as well.

The HIV treatment market already has some competition from other companies such as Gilead (NASDAQ:GILD), which has developed its own treatment called Biktarvy. However, the issue with Gilead's treatment as well as many others in the HIV market is that patients need to ingest these pills on a daily basis. One study among pregnant women with HIV indicated that the main reason patients missed their doses was simply because they forget to take them. Out of the 25% of participants who failed to take their HIV treatment on a daily basis, 57% of them cited "forgetting" as the reason.

While having an edge in the convenience factor might seem like a trivial advantage, it's actually a major selling point for Glaxo. Patients could choose to receive an injection once every two months rather than the potential hassle of a daily pill, something that could make Glaxo's treatment the preferred choice among some patients.

While these factors could be a big deal for GlaxoSmithKline, it should also be mentioned that the British pharmaceutical giant faces some challenges. While its ovarian cancer treatment seems to be proceeding well, some investors are uncertain of whether it was worth the hefty price tag Glaxo paid to gain the rights to it.

In December 2018, Glaxo paid $5.1 billion to purchase a majority stake in Tesaro, the company that was initially developing Zejula. With sales of the drug coming in at only $70.3 million in its most recent quarter, paying $5.1 billion seems like a massive investment for what seems like a promising, albeit uncertain, future for the drug. It's these types of gargantuan acquisitions that have led the company to become bloated with debt and making its investors concerned that Glaxo could cut its esteemed 4.8% dividend. The company has seen its debt-to-equity ratio grow significantly over the past few years, rising from 0.47 in 2007 to a frightening 7.86 in Q2 2019.

Investors also need to consider that Glaxo is in a transitional period right now. From a historical perspective, Glaxo has built itself around three different revenue segments: its legacy pharmaceutical business, vaccines, and consumer goods including toothpaste brand Sensodyne. The idea is that this diversification will help guard the company against the boom-and-bust nature of its pharmaceutical division, where cash flow can be inconsistent until a major breakthrough arrives.

While it's a good idea in theory, Glaxo has seen its debt levels increase while revenue has faltered. Now, CEO Emma Walmsley has decided to pursue a restructuring strategy meant to trim away many of these mediocre-performing segments. This includes Glaxo's consumer goods segment, which is planned to be split off into a joint venture with Pfizer (NYSE:PFE) in the years to come.

Should you buy GlaxoSmithKline right now?

I'm not too impressed by GlaxoSmithKline as a pharmaceutical investment. While its HIV and ovarian cancer treatments are showing some promise, there are still competitors in both of these fields with less debt baggage than Glaxo. While management seems to be betting on the company's drug candidates as the primary drivers of revenue in the future, I'm not sure if they are promising enough that they will become market leaders.

Considering that GlaxoSmithKline is in a transitional period of sorts right now, where uncertainty is higher than usual, investors might want to give this company a pass and opt for another major biopharma stock for now.