Please ensure Javascript is enabled for purposes of website accessibility
Free Article Join Over 1 Million Premium Members And Get More In-Depth Stock Guidance and Research
By Jeremy Bowman - Sep 28, 2019 at 9:10AM

The tech giant is looking to change the $3.7 trillion healthcare industry as we know it. Amazon Care has real potential to disrupt the system.

Amazon.com ( AMZN -1.38% ) has become a trillion-dollar company for one reason above all others: its strength as a disruptor.

Starting out with traditional retail, Amazon has waged war on established industries including book publishing, supermarkets, enterprise computing, cable TV, and logistics. Now, healthcare seems to be securely in its sights.

For a while, Amazon's intention to disrupt healthcare has been coming into focus. The company acquired online pharmacy PillPack last June and launched a joint venture last year with JPMorgan Chase ( JPM -1.81% ) and Berkshire Hathaway ( BRK.A -0.45% ) ( BRK.B -0.59% ) that is focused on health insurance. But Amazon just made its biggest move yet to break into the $3.7 trillion healthcare industry.

It just introduced Amazon Care, a virtual and in-person clinic currently only available to Amazon employees in Seattle and their families. The service provides help with issues like colds and infections, preventive-care visits, and tests for things like sexually transmitted infections. Amazon is partnering with Oasis Medical, a family practice clinic in Seattle, to provide the service.

Though this is just a pilot program for now, it's clear from the company's history where it's going with Amazon Care. It's also evident why Amazon has a better chance of disrupting the industry than anyone else does. 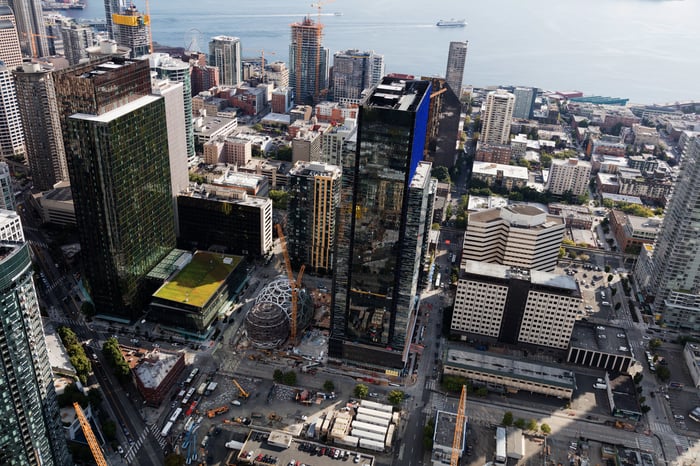 After a number of adventures -- successful and unsuccessful -- into different industries, Amazon has developed a playbook for disruption. The company puts the customers first, inventing on their behalf, and then tests its ideas internally, building the new business for Amazon employees before opening it up to the general public.

The best example of this is Amazon Web Services (AWS), by far the company's most important business outside of e-commerce. AWS started almost accidentally as the company began building the internal cloud infrastructure to handle its own massive computing demands. By 2003, the tech giant began to realize it had built a group of infrastructure services that would be desirable to outside developers and companies. The AWS team developed the idea over the next few years before formally launching what's now known as AWS in 2006.

Amazon has employed a similar model time and again as it has developed new businesses. After mastering its own e-commerce operation, the company opened up a third-party marketplace and began to provide fulfillment for third-party sellers. Similarly, its cashier-less store Amazon Go was only open to employees for more than a year, giving the company time to perfect its "Just Walk Out" technology before opening the store to the general public. In logistics, the company continues to build out the delivery infrastructure it needs to serve itself, challenging incumbents like UPS and FedEx.

With healthcare, Amazon is doing what works: testing out a new service on its own employees and taking feedback to perfect its systems and make them as customer-friendly as they can be.

A broad set of advantages

Testing a new product or service before making it widely available isn't unusual. What sets Amazon apart here is its focus on the customer. That focus has earned it a sterling reputation for customer satisfaction, and it has allowed it to move into so many different businesses with the advantage of getting the benefit of the doubt from customers. Amazon makes no secret about its customer focus -- its mission is to be the world's most customer-centric company.

In his annual letter to shareholders earlier this year, CEO Jeff Bezos highlighted the company's customer focus as a key reason for the success of AWS:

Much of what we build at AWS is based on listening [his italics] to customers. It's critical to ask customers what they want, listen carefully to their answers, and figure out a plan to provide it thoughtfully and quickly (speed matters in business!). No business could thrive without that kind of customer obsession. But it's also not enough. The biggest needle movers will be things that customers don't know to ask for. We must invent on their behalf. We have to tap into our own inner imagination about what's possible.

Arguably, healthcare is the biggest pain point in the U.S. economy. When Amazon, JPMorgan Chase, and Berkshire Hathaway launched the joint insurance venture now known as Haven, Warren Buffett called the ballooning costs of healthcare a "hungry tapeworm on the American economy." The healthcare industry regularly ranks as one of the most hated in the country; Americans give low ratings to both the health insurance and pharmaceutical industries.

It's easy to see why. Prices are inconsistent and often inscrutable. Patients (healthcare's "customers") have little control over the service they get or how much they pay. The industry is full of bureaucracy, and often seems designed to frustrate patients rather than meet their needs.

A better model via maximum convenience

With Amazon Care, the company is seeking to reorient healthcare to maximize the convenience for the patient, with a system designed to eliminate waiting time and travel time. By using tools like in-app chats and videoconferencing, the company taps technology to offer solutions for when in-person visits aren't necessary. Similarly, by providing in-house or in-office visits, Amazon removes the burden of making a sick person travel to the doctor's office. And with the help of PillPack, Amazon is able to send prescriptions straight to the patient's home in as little as two hours, obviating the extra effort to go to a pharmacy after a doctor's appointment.

According to early reviews from Amazon employees about Amazon Care, the service is already hitting the mark. One reviewer said: "I woke up on a holiday with a 102 fever feeling terrible. I knew nothing would be open. I used Amazon Care and had a video visit with a doctor immediately. I was even able to have a prescription delivered directly to my home. I was so grateful not to have to leave the house that day."

Like AWS, Amazon Care isn't something that customers asked for, but it definitely looked like something they would want. The healthcare space is ripe for innovation as the industry has been slow to adopt modern technologies and respond to customer demands, not to mention its rapidly increasing costs.

Amazon is in a unique position to bring customers a better healthcare model, and stake out a beachhead in an enormous industry. We can't know how fast Amazon Care might expand, but, like AWS, this service has the potential to be one of the company's biggest businesses a decade from now. The healthcare industry should be paying attention.