On Friday, the S&P 500 and the tech-heavy Nasdaq indexes declined 0.5% and 1.1%, respectively, in part on news that the Trump administration was weighing actions to limit U.S. investment in Chinese companies.

However, as usual, there were some stocks that bucked the downtrend and set new annual highs during the trading day. Of finviz.com's universe of 3,503 small-cap and larger stocks, 135 stocks -- less than 4% -- fell into this category. 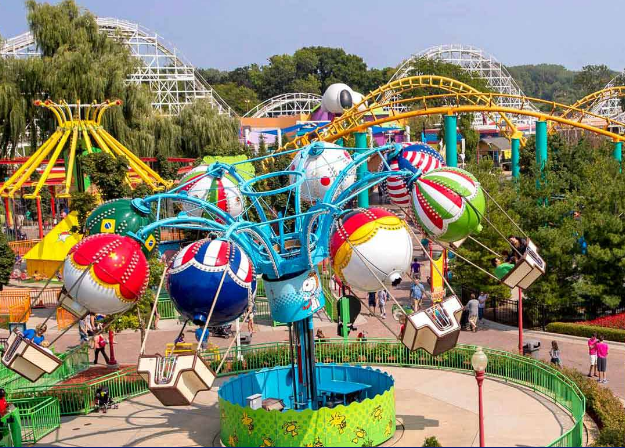 Cedar Fair is one of the largest regional amusement park operators in the world. The company owns 15 parks -- mostly amusement parks but also several water parks -- across North America and manages one other park. It also owns overnight accommodations -- cabins and campsites through hotels -- nearby several of its parks. Its largest and probably best known park is its flagship Cedar Point in Ohio.

The company's dividend is currently yielding a more-thrilling-than-a-roller -coaster -- at least to investors -- 6.4%. The high yield largely stems from the fact that Cedar Fair is organized as a master limited partnership (MLP), so it must pay out the majority of its profits to investors in the form of a dividend in order to receive preferential tax treatment. Part of the reason for such a high yield, however, is that the stock price has been struggling over the last two years, though -- as the chart shows -- it's been making a comeback in 2019. One likely reason for this is that investors have been concerned about an impending recession, a topic which we'll explore further in a moment. Shares, which closed at $58.33 on Friday, are about 19% off their all-time closing high of $72.29, set on May 1, 2017.

Realty Income -- which bills itself as "The Monthly Dividend Company -- is a real estate investment trust (REIT) primarily focused on free-standing, single-tenant retailing occupancies in the United States. It limits its risk by diversifying its 5,900-plus property portfolio by tenant, industry type, and geographic location, and by focusing on high-quality retailers whose operations help insulate them from online competition.

Realty Income has historically owned properties in just U.S. states -- 49 of them currently -- and Puerto Rico, but earlier this year became an international company by acquiring a portfolio of 12 properties in the U.K.  The company's occupancy rate, which has been consistency very high, was 98.3% at the end of the second quarter.

Like Realty Income, Middlesex Water's high on Friday is both an annual and an all-time high.

Are any of these stocks a buy?

Cedar Fair is a solid choice for income-focused investors who have at least a moderate tolerance for risk and volatility and a long-term focus. It's not an ideal stock for more conservative investors. On the positive side, it's in a business that has high barriers to entry, which keeps competition down. However, while amusement parks aren't likely to ever go out of style with consumers, they tend to suffer during severe economic downturns. Cedar Fair stock underperformed the market during the Great Recession, which technically lasted from December 2007 to June 2009. It fell 51% (including dividends), while the S&P 500 declined 35.6% (also including dividends).

Realty Income is a high-quality stock that should make a good fit for most investors, particularly income-oriented investors. The company is well established (founded in 1969) and has a fantastic record of increasing its dividend: Its recently declared dividend is the 103rd time it's raised its monthly dividend since going public in 1994.

Middlesex Water and, in fact, most water utilities make solid holdings for conservative investors. But American Water Works (AWK -1.91%) is my favorite in the industry. It's the largest publicly traded U.S. water and wastewater utility and that size brings it advantages, notably on the acquisition front. This is in part why Wall Street analysts expect American Water to grow EPS about three times as fast -- 8.2% to 2.7% -- as Middlesex over the next five years.

3 Top REITs to Recession-Proof Your Portfolio