Consider ShockWave Medical (NASDAQ:SWAV), a newly public company focused on cardiovascular disease. This innovator is commercializing a new type of therapy that has no direct competition, and it's growing at a triple-digit rate.

I was recently given an exclusive interview with Doug Godshall, ShockWave's president and CEO, to learn more about his company and the opportunity ahead. Below are some of the highlights from our conversation. (Some quotes have been edited for clarity.) 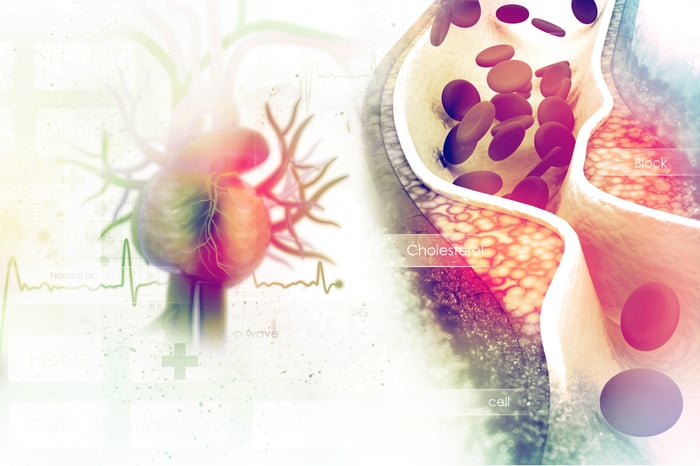 Heart disease is the leading cause of death worldwide. Atherosclerosis, or the narrowing of an artery due to the gradual buildup of plaque, is a major cause.

A common surgical treatment for atherosclerosis is angioplasty, a procedure in which a balloon is inserted into the artery and inflated at the site of the blockage. This widens the artery and helps to restore blood flow.

Angioplasty is highly effective at treating atherosclerosis. However, it doesn't work well when the plaque becomes calcified, which occurs in about 30% of cases. This forces cardiovascular surgeons to use alternative treatments such as "non-compliant" balloons (which operate at high pressure, or contain blades that cut the calcium) or rotational atherectomy (a miniaturized drill is inserted into the artery and cuts or sands the calcium from the inside).

These advanced techniques can be effective, but the procedures are difficult and risky. Non-compliant balloons and rotational atherectomy increase the risk of rupturing the artery wall. They also increase the chance of shedding debris into the bloodstream, which could cause a huge range of complications.

When ShockWave's founders learned about calcified artery plaque they asked a "crazy" question: Could shock waves be used to break apart the calcium in the artery wall?

This idea isn't as ludicrous as it first sounds. For years, doctors have been blasting apart kidney stones -- which are primarily made of calcium -- with sound waves in a treatment called lithotripsy. If the technology could be miniaturized to fit inside an artery, it could create an effective therapy.

After years of research and development, the company succeeded in winning regulatory approval for a device called the ShockWave Intravascular Lithotripsy (IVL).

Here's how it works: The IVL is inserted into an artery at the site of the calcium blockage, using the same steps as an angioplasty procedure. A low-pressure balloon is inflated and then the device is activated, which produces ultrasonic sound waves from inside the artery. The sound waves crack apart the hard calcium, yet they have minimal effect on the surrounding soft tissue. A stent can then be placed at the blockage to restore blood flow. (ShockWave produces a great video that shows this process in action.)

An important benefit of the IVL is that the calcium deposits are cracked apart but they do not move. This minimizes the risk of shedding debris into the bloodstream, which makes the procedure much safer than traditional options.

ShockWave's technology is groundbreaking from an effectiveness and safety perspective, but it can still be hard to convince patients, providers, and insurers to get on board with a new technology if it costs too much.

That's why I kicked off my conversation with ShockWave's CEO Doug Godshall by asking him to talk about the cost difference between the IVL and the products that it is trying to replace: 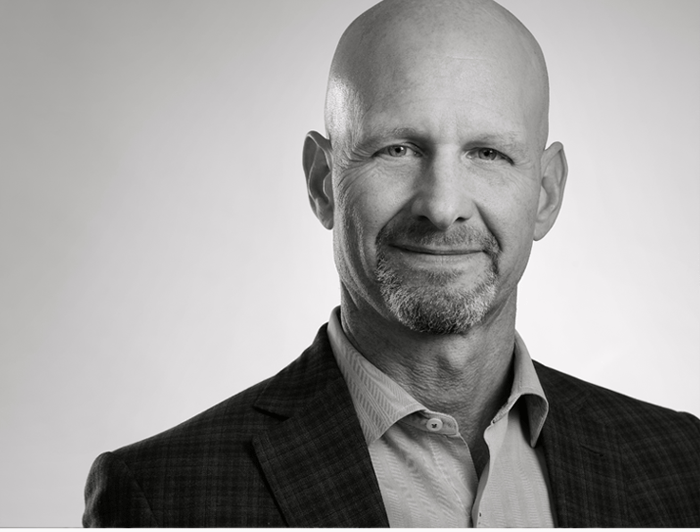 In some arteries, we're replacing a regular balloon, and those run in the low hundreds of dollars ... for a non-compliant balloon if there's a lot of calcium. A non-compliant balloon is a pretty bad idea, but in many cases, it's the least bad option that they have without ShockWave. Our peripheral device costs a little under $3,000. The device that we are replacing is an atherectomy catheter, and those [are] in the $2,000 to the mid-$3,000 range.

Godshall was quick to point out that these numbers are just direct costs and don't give a complete picture of the total cost differential. In some cases, using the IVL eliminates the need to perform an extra procedure, especially in hard-to-access parts of the body. When that happens, the total cost of using the IVL can be significantly cheaper than the alternative:

In a lot of the vessels, we're also replacing surgery, so we're not really replacing just an interventional tool ... we're replacing surgery and hospital stay costs and anesthesia. ... So it's a very different metric that we'd be measured against if you were trying to calculate cost differential.

The fascinating thing about this business is the rich diversity of all the diseases we're providing a unique solution for, and that we're not just in a zero-sum game. In many of our cases, we're giving them the ability to do something they couldn't do with other devices.

The IVL system consists of three parts. The first is a reusable generator that powers the lithotripsy. The second is a connector cable that is held by the physician to activate the therapy. The third is an intravascular lithotripsy catheter that is inserted into each patient. 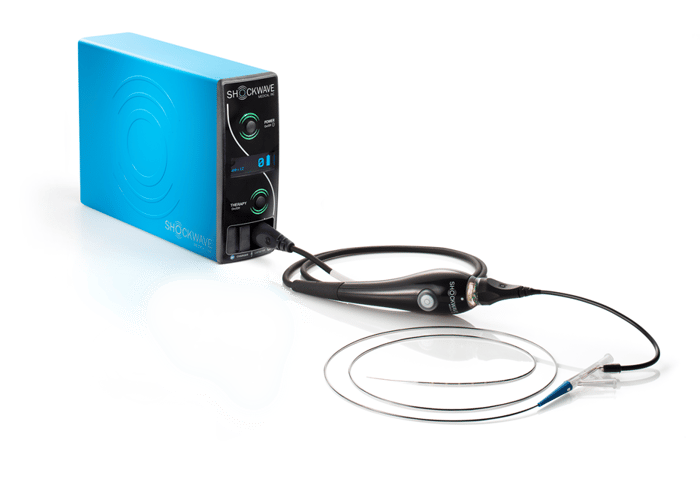 My initial hunch was that ShockWave was using a classic razor-and-blades business model, like many other successful medical device companies such as Intuitive Surgical, Dexcom, and Insulet. That's why I next asked Godshall to clarify whether that $3,000 price point included the cost of the capital equipment -- meaning the reusable generator that produces the lithotripsy -- or he was just talking about the disposable catheter sets:

Just the catheters. The capital equipment -- at least in the U.S. -- we tend to loan it to the hospital, sort of like a consignment basis. Some hospitals prefer to buy it from us and we'll sell to them, but at a fairly low capital equipment cost. ... Our selling price for the box is a little harder to measure in some ways, because it can all be part of a package deal.

Godshall then went on to say that nearly all of the company's revenue is currently being generated from catheter sales, not from generator sales. In his words, ShockWave is pursuing "a blades model, not a razor model."

Since I love to invest in companies with lots of recurring revenue, that was music to my ears.

The IVL is currently approved in the U.S. and Europe to treat occlusive peripheral artery disease (PAD), which is a $1.7 billion addressable market opportunity. ShockWave also has approval in Europe to treat coronary artery disease (CAD), and it's currently pursuing the same indication in the U.S. (it also recently received "breakthrough device" designation from the Food and Drug Administration). The CAD opportunity represents another $2 billion in annual revenue potential.

Another huge addressable market is aortic stenosis, which occurs when the heart's aortic valve becomes calcified. This is a $3 billion opportunity.

While PAD, CAD, and aortic stenosis will keep the company busy for a long time, I wondered whether the IVL could eventually be used to treat other forms of calcium buildup in the body:

We've had folks ask us about other anatomical opportunities. We just don't know enough about the nature of some of the other calcified vessels or organs to know if it would work. We have a long way to go to finish our work in the cardiovascular system. So far we haven't heard anything else that suggests we should take our focus away from that.

Shockwave is still in the early innings of commercialization, but the numbers that have been produced thus far look impressive. Last quarter sales grew 339% to $10 million. Management projects that revenue growth from the full year will exceed 200%.

The strong top-line growth is enabling the company's gross margin to expand rapidly. This figure recently grew by 1,100 basis points to 59%, which is impressive given that the total sales volume is still quite low.

I asked Godshall to give investors a sense of how high the company's gross margin could eventually go:

ShockWave is currently in investment mode and is using all available resources to drive top-line growth. However, sales are currently growing at a faster rate than expenses, which suggests that the company is on a trajectory to eventually reach profitability.

I asked Godshall if investors can expect that revenue growth will continue to outpace expense growth:

We're certainly not shy about hiring right now. We've had to step up a second shift in operations, and that's definitely going to add to the "cost of goods" line for production. Nor are we shy about adding sales folks.

But we should see continued revenue growth outpacing operating expense growth on a percentage basis. We've indicated that we do not expect to be profitable until after coronary launch. We're not running to profitability, because that will choke off sales growth.

ShockWave first got on my radar after Abiomed (NASDAQ:ABMD) -- a medical device company that I deeply admire -- took an equity position in it before it went public. I viewed that as a big vote of confidence for the business.

I asked Godshall to talk about his relationship with Abiomed's CEO Michael Minogue, and how the investment came to take place:

He kept hearing really good things from his customers who were just beginning to become our customers. They were saying very flattering things, about how ShockWave was giving them a unique solution for patients for whom they didn't love the options they had before ShockWave.

He started floating the idea of investing in the company. A straight investment really didn't strike me as what would make sense for us, but by the fall we started talking about partnering, training, and an investment. And that suddenly made a lot more sense, because we were able to help them in the U.S. to get Impellas [Abiomed heart pumps] in through really calcified iliac arteries.

Godshall also noted that the partnership is helping to open doors at the more than 1,400 centers in the U.S. that are currently using Abiomed's Impella heart pumps. He also believes that working together will help to "grease the skids" for when ShockWave wins approval to treat CAD in the U.S. (which is on pace to happen in 2021).

I next asked Godshall to talk about the biggest obstacles that are blocking the company from achieving its goals:

We have world-class competitors in the interventional space that would rather customers buy their products than ours. If we take our 50 folks in the field in the U.S., there are 800-plus sales representatives in all the other companies trying to convince customers to use their product instead. We would argue that ours is a custom fit, and we solved the calcium problem more elegantly and safely than anybody else, but you've got to break through that noise.

ShockWave is a buy

There are plenty of reasons to be excited about ShockWave's technology and where this company is heading. However, there's no doubt that Wall Street is pricing this business for growth. Shares are currently trading hands at 32 times trailing sales, so if the company fails to deliver against its high expectations, the share price could get smashed.

While there's no doubt that the risks are high, I personally believe that the long-term potential is large enough to justify a small investment today. That's why as soon as the Fool's trading rules allow, I plan to add a few shares of ShockWave to my personal portfolio.