Monday was a solid day on Wall Street, as market participants seemed to be more optimistic that contentious issues affecting stocks will reach resolutions. In particular, a calming of tensions between the U.S. and China seemed to ease investors' nerves, especially after fears that Washington might make efforts to try to proscribe trading of Chinese stocks on U.S. exchanges. Some good news on the corporate front also lifted the mood. Thor Industries (NYSE:THO), Dova Pharmaceuticals (NASDAQ:DOVA), and Bed Bath & Beyond (NASDAQ:BBBY) were among the top performers. Here's why they did so well.

Shares of Thor Industries climbed 16% after the recreational vehicle specialist reported strong results in its fiscal fourth quarter. Revenue was higher by 23% compared to the year-ago period, lifted primarily by the company's acquisition of Erwin Hymer Group earlier this year. Net income rose year over year, and Thor was also enthusiastic about the extent to which independent RV dealers have worked through a previous inventory glut. Thor sees positive signs that strong demand is returning to the industry. As travelers continue to look for ways to save on costs, RVs represent good value, and Thor hopes that sentiment will drive buyers to make more purchases. 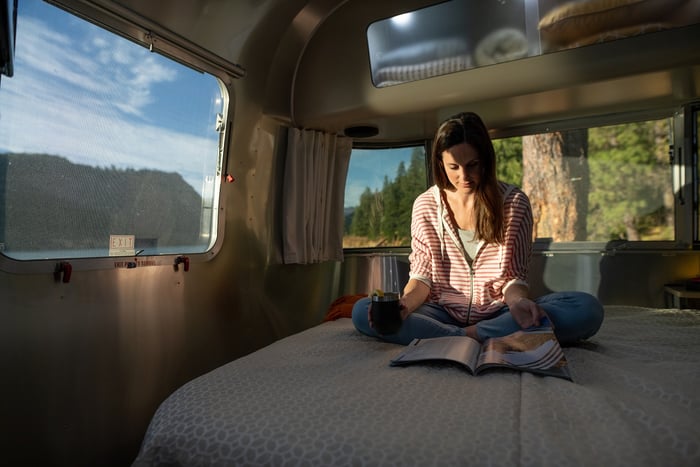 Dova gets an offer it can't refuse

Drugmaker Dova Pharmaceuticals saw its stock soar more than 38% following news that it is an acquisition target. Sweden's Sobi offered to buy out Dova for $915 million, with shareholders to receive $27.50 per share in cash for their Dova stock. Investors will also get a contingent value right worth an additional $1.50 per share, to be paid out if Dova's platelet-boosting therapy, Doptelet, gains approval from the U.S. Food and Drug Administration for treatment of a rare bleeding disorder. As nice as the quick jump is, the buyout is still for less than where the stock traded as recently as last year.

A different kind of sale at Bed Bath & Beyond

Finally, shares of Bed Bath & Beyond gained almost 8%. The household goods retailer got positive comments from analysts at Wedbush, including a rating upgrade from neutral to outperform and a $2 boost in the price target to $16 per share. Analysts admit that Bed Bath & Beyond has gone through a lot of tough times in the past couple of years, and there's more work ahead in restructuring and remodeling efforts. However, Wedbush is upbeat about the retailer's prospects, especially if it can start to sell off some of its real estate and ancillary assets, such as the Cost Plus World Market line of stores. Some investors are skeptical, but the stock has fallen far enough that Bed Bath & Beyond could offer enough upside value to make up for the risk.