It wasn't long ago that Best Buy (BBY -1.41%) seemed headed for a slow, certain death, thanks to Amazon. Customers were increasingly visiting Best Buy only to look at electronics, then leaving to buy them online. Best Buy's greatest assets -- location and number of stores -- were quickly becoming liabilities. The future looked grim. 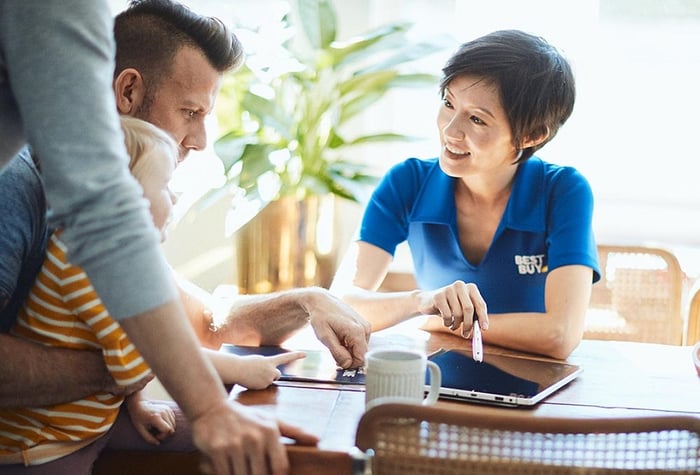 What comes after the resurrection?

Joly took on the role of executive chairman in spring 2019, handing the CEO role over to former CFO Corie Barry.

Healthcare is "shaping up to be Best Buy's next frontier of growth," according to Morgan Stanley analyst Simeon Gutman. He estimated that healthcare could bring in $11 billion to $46 billion in potential revenue for Best Buy over the long term. In the nearer term, it could add up to $500 million to $2 billion by 2025.

Capturing the business of Americans 65 and older is a goal the company is already addressing. Best Buy has spent $1 billion on acquisitions in the health space, most notably the $800 million purchase of GreatCall, a developer of smartphones, smartwatches, and medical alert devices. Other acquisitions include remote monitoring devices relaying patients' condition to physicians and an entry-level line of monitoring equipment geared toward seniors aging at home and their families who want to keep an eye on them.

Best Buy has a huge head start in the healthcare space over competitors Amazon, Walmart, and Apple. Not only is the company an agnostic source of helpful tech tools, it has a massive, trusted customer-service workforce in place with Geek Squad, with plans to expand into healthcare services in the home. And thanks to the excellent customer-service standards prioritized by former CEO Joly, those employees are ready.

Besides the new initiatives, Best Buy's core business of consumer electronics has a rosy future. That's according to market researchers The NPD Group, whose newly released The Future of Tech report states that consumer electronics revenue is expected to grow by 3% annually through 2021 in the United States.

"Steady single-digit growth is notable in a mature market where consumers are not replacing or repurchasing items at the same rate they did in prior years," said Stephen Baker, vice president and industry advisor for The NPD Group. Most of the growth, he added, will come from people trading up on items and buying products with higher prices as opposed to higher unit volume sales.

The future isn't here yet

Best Buy has an innovative plan to be first to market in networked healthcare initiatives. But there are some immediate headwinds that caused the stock price to fall by 8% following mixed second-quarter 2019 results.

Tariffs on imported goods from China are having a negative effect, and more could be on the way. Until clarity about that situation improves, the stock price will struggle to rise. Jitters about the U.S. economy have also made consumer buying behavior unpredictable in the second half of the year.

Investors should monitor device sales reports as we head into the holiday season, as well as keeping an eye on tariff talks. Best Buy has a healthy future ahead of it, but timing will be important when buying in.