Facebook (NASDAQ:FB) recently unveiled Horizon, a virtual reality social hub for Oculus users, at its annual Oculus Connect conference. The platform will allow users to play games, create their own worlds, and interact with other users via digital avatars.

The announcement wasn't surprising, since Facebook has constantly expanded its VR ecosystem since its acquisition of Oculus VR five years ago. However, Horizon looks like Facebook's biggest and most cohesive attempt at creating a virtual world to date, and it could offer us a glimpse of the social network's future when it arrives in 2020. 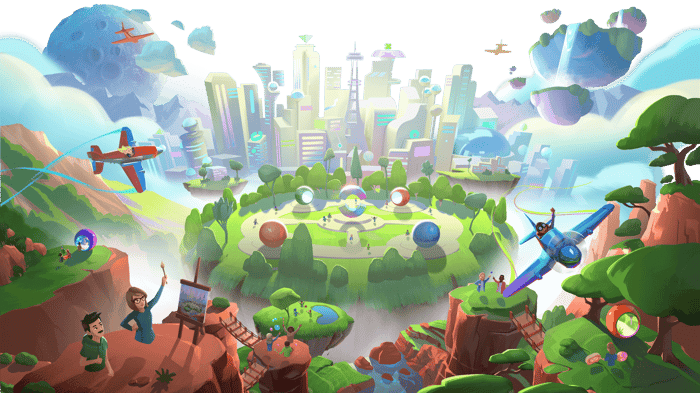 Making the OASIS a reality

Facebook's Oculus gives every new employee a copy of Ernest Cline's book Ready Player One, in which people spend most of their lives in the OASIS, a massive VR universe that spans countless planets. A central theme in the book, which Steven Spielberg adapted into a film last year, is that VR represents the ultimate form of social escapism.

Facebook clearly sees Oculus as the foundations for a real OASIS, and CEO Mark Zuckerberg expects VR to become the next major computing platform, with more than a billion users within the next decade. But to date, Facebook's efforts to build that computing platform have been messy and fragmented.

There was Oculus Home, which let users create virtual homes and invite friends over, but the app only ran on its high-end Rift headsets. Facebook's first stand-alone headset, the Oculus Go, ran a similar platform called Oculus Rooms and Venues, but it didn't connect to Oculus Home. Go's successor, the Quest, released this May, ran a new software platform which wasn't compatible with the earlier platforms, leaving third-party developers to bridge the gaps with cross-platform apps.

Back in 2017, Facebook launched Spaces, which encouraged VR users to invite up to three other users to chat, watch videos, or play games together. This seemed like a promising step toward creating a real OASIS, but the platform was only launched for the Rift and HTC's Vive instead of the Go and Quest.

Clearing the way for a proper VR ecosystem

Those fits and starts indicated that Facebook needed a cohesive VR strategy that put everyone on the same page.

The first major step in the right direction was the Oculus Quest, which was well-received after its launch in May. Zuckerberg recently claimed that Facebook was selling the Quest "as fast as we can make them," and SuperData expects the headset's shipments to hit 1.3 million units this year.

That's still a niche market, but it finally gives Facebook enough room to launch a more ambitious VR social network with Horizon. Facebook has stated that Horizon will run on both the Rift and Quest headsets, indicating that it finally plans to pull its higher-end and lower-end hardware users onto the same page.

Facebook's introductory video for Horizon is light on details but indicates that it will support more simultaneous users than Spaces and resemble an MMO (massively multiplayer online) game environment instead of enclosed rooms. That open-world environment could encourage users to socialize with people all across the world -- which would complement the growth of its core social networking platforms and new efforts like online dating.

But that's not all. Facebook recently acquired CTRL-labs, which develops a wristband that intercepts electric signals between the spinal cord and hand. Over the long term, those brain-computing links could eventually replace traditional controllers or haptic gloves and allow users to seamlessly navigate VR environments.

Facebook still generated 98% of its revenue from online ads last quarter, so sales of hardware devices like its Oculus headsets and Portal devices won't move the needle anytime soon.

But over the long term, Facebook's big bets on VR could increase the stickiness of its ecosystem and expand its social network beyond PCs and mobile devices. In the future, tech investors might look back at Spaces and Horizon and realize that they were witnessing the first steps toward Facebook's creation of a real-life OASIS.