The Medicines Company (NASDAQ:MDCO) is up 161% this year, thanks in large part to the success of its cholesterol-lowering drug inclisiran.

In August, the company announced that one of its late-stage clinical trials, Orion-11, was positive, which was followed by a presentation a few days later at the European Society of Cardiology's ESC Congress 2019 that showed inclisiran produced placebo-adjusted cholesterol reductions of 54% over the 18-month study.

Last week, The Medicines Company said two more late-stage studies, Orion-9 and -10, met their endpoints. Again the company didn't initially release data from the studies -- it's saving them for the American Heart Association Scientific Sessions in November -- but the company noted that the efficacy and safety data "were at least as favorable as observed in ORION-11." 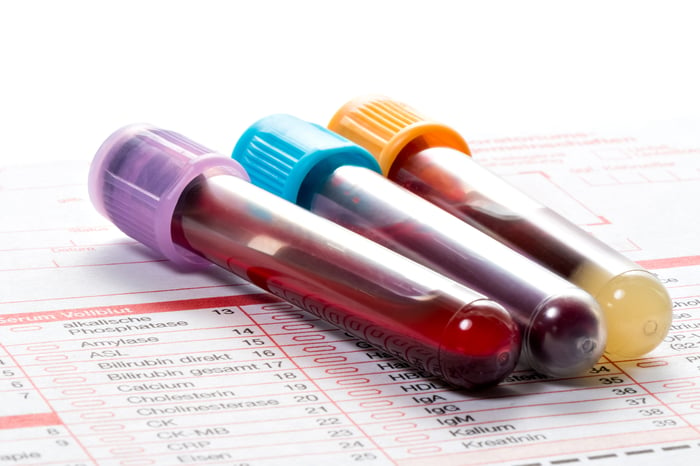 Inclisiran works though RNA interference (RNAi). If you've forgotten your high school biology: DNA is transcribed into RNA, which is translated into proteins that do the work in cells. Most drugs target proteins, often binding to them to inhibit their activity, but RNAi drugs target the RNA step, reducing the levels of RNA, which reduces the translation of the subsequent protein.

It's not the first PCSK9 inhibitor -- Amgen (NASDAQ:AMGN), as well as Sanofi (NASDAQ:SNY) and Regeneron Pharmaceuticals (NASDAQ:REGN) already market drugs that target the PCSK9 protein -- so the efficacy findings shouldn't be that big of a surprise.

This year's return for The Medicines Company is largely due to the lack of safety issue for inclisiran. Amgen's Repatha and Sanofi and Regeneron's Praluent are antibodies that target the PCSK9 protein directly and have a mild side effect profile.

The worry was that inclisiran would have off-target side effects, but that doesn't seem to have been an issue so far. In the Orion-11 study, 22.3% of patients had a serious adverse event while on inclisiran, compared to 22.5% of patients on placebo.

Perhaps, if that were it, Alnylam wouldn't necessarily be a good investment; admittedly, the royalty amount is a bit too vague to accurately value the potential returns. Does "double digits" mean 10%, 15%, 20%?

But Alnylam has built a franchise on the RNAi platform. The biotech already has a drug on the market, Onpattro, that treats transthyretin-mediated amyloidosis and has 10 programs in clinical development.

One of those drugs, givosiran, for a rare disease called acute hepatic porphyria, is already under review by regulators in the U.S. and EU. And Alnylam is expecting data from a late-stage clinical trial testing another RNAi drug, lumasiran, for a kidney disease called primary hyperoxaluria type 1, later this year.

Platform drugmakers can offer huge advantages for biotech investors. With drugs having similar properties, it's much easier to form a robust pipeline. For RNAi, Alnylam just needs to know the sequence of the RNA it wants to target and repeat the process it's done in designing the previous drugs.

But the similarities also create some risk. If there's a safety problem with one drug, others could have similar issues.

All of Alnylam's internally developed programs have required relatively small clinical trials since they treat rare diseases, which could potentially allow a somewhat rare side effect to slip through undetected.

Fortunately, the Orion phase 3 clinical trials for inclisiran enrolled over 3,600 patients, which should give investors confidence that the RNAi platform is relatively safe.

With the potential to have four drugs on the market in short order and shares up a more modest 10% for the year, Alnylam looks like a better way to benefit from the development of inclisiran and the opportunity that RNAi presents.