Every time Walmart (NYSE:WMT) strays from its primary purpose of providing its customers with rock-bottom prices, it never works out well, causing the retailer to issue a mea culpa and announce it is returning to its roots.

Its most recent attempt at broadening its horizons by going upscale, a white-glove concierge service called Jetblack, has the retailer looking like it wants to cut its losses again and shed the business.

Bloomberg reports Walmart is entertaining inquiries from outside parties interested in the text-based personal shopping service, and the retailer is considering whether to sell it, spin it off, or partner it with another business. 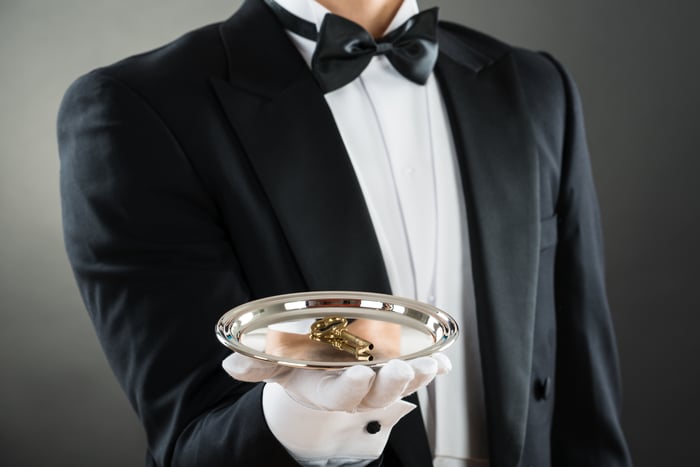 A very narrow slice of the market

Jetblack, launched out of Walmart's start-up incubator Store No. 8, isn't necessarily a failure. E-commerce CEO Marc Lore told shareholders at the retailer's annual meeting that two-thirds of the members who pay $50 a month to participate in the service engage with Jetblack weekly and spend on average $1,500 a month.

But it's very much a niche business, essentially serving just Manhattan -- and only buildings with a doorman available 24/7. And amid an e-commerce division that's estimated to lose $1 billion this year, there's a need to pare back the unit's ambitions. Even though Walmart has reportedly gained a lot of insight into customer shopping habits through Jetblack, the orders are costly to fill.

Members can shop for just about anything, though it does exclude perishable items, alcohol, tobacco, CBD products, prescriptions, and oversize furniture. It also doesn't schedule personal services, such as salon appointments. Yet Jetblack is also brand and store agnostic, meaning members aren't limited to Walmart or Jet.com; it'll get your order from anywhere.

Rethinking a number of projects

Walmart has already shaken up its business, bringing its e-commerce site Jet.com wholly within the retailer's operations, and has considered selling the upscale designers ModCloth and Bonobos. It has already shopped Bonobos around, until Walmart thought better of it. But ModCloth and another brand, Eloquii, will probably be sold later this year. All three are said to be unprofitable.

Having these trendy outlets and services doesn't really serve the broader need of meeting the challenge of Amazon.com (NASDAQ:AMZN), which appears to be Walmart's main goal. While they were purchased for that purpose and there is a halo effect to its online business, because getting people to shop its site and use its services may draw them into Walmart's stores, the never-ending losses are difficult to bear and hold back the performance of the company.

It also comes as Walmart is investing over $1 billion to expand in China and build out its logistics operations, with plans to build or upgrade 10 logistics centers.

In the past, Walmart has tried to model itself after Target and sell more-fashionable clothes, such as when it brought in lines from designers like Max Azria and Norma Kamali. It also launched its own Metro 7 fashion brand and opened offices in New York's Fashion District. All ended in failure.

Instead of pretensions of getting on the runway and punching up to be a luxury destination, Walmart does best when it focuses on its core competencies, which is why it has a real chance of beating Amazon in online grocery delivery. It knows that business cold and has the store footprint to competently serve its customers.

Although the discussions about Jetblack were reportedly not initiated by Walmart, the retailer is entertaining them nonetheless, though like Bonobos, it may decide to keep the service in the end.

But it would probably be better if it did jettison the project and just concentrate on giving its customers the best possible price on a broad range of goods.