Please ensure Javascript is enabled for purposes of website accessibility
Log In Help Join The Motley Fool
Free Article Join Over 1 Million Premium Members And Get More In-Depth Stock Guidance and Research
By Keith Speights - Updated Oct 3, 2019 at 9:03AM

There are plenty of reasons to invest in the robotic surgical systems stock. This one might surprise you.

Some things just don't seem to make sense, but they're true nonetheless: A sharp knife is safer than a dull knife. Working less can make you more productive. New competition can expand a company's market opportunity. 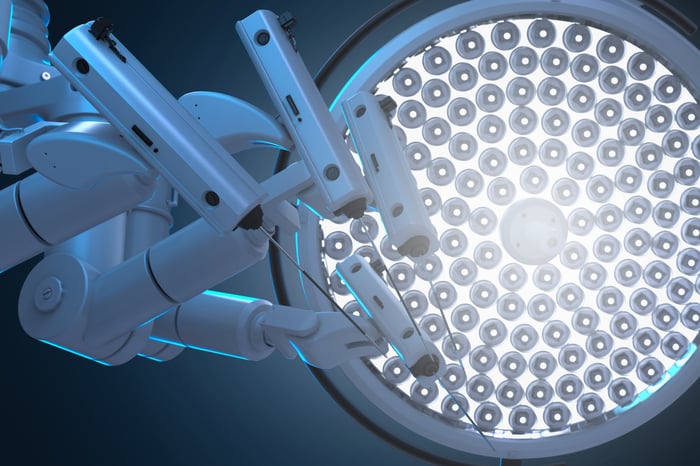 No one was surprised by Medtronic's move into robotic surgery. The company has been telegraphing its intentions for several years. After a long wait, Medtronic is only a few months away from launching its Hugo robotic surgical system on a limited basis to collect clinical data.

The Hugo RAS should enable Medtronic to drive robotic surgical costs down to around the same level as laparoscopic procedures, according to Bob White, Medtronic's executive vice president and president of its minimally invasive therapies group. This could create more opportunities for hospitals to use robotic surgery.

Medtronic's research found that utilization of current robotic surgical systems isn't as high as it could be in part because of setup time and the need for dedicated operating room space. The company thinks that the way its Hugo system is designed will help alleviate these issues.

Why it's good for Intuitive Surgical

You might think that the entrance of a new competitor that's more than twice its size would worry Intuitive Surgical somewhat. It also seems natural that Wall Street analysts would consider lowering their outlook for Intuitive in light of a new threat. But that hasn't been the case.

Intuitive Surgical CEO Gary Guthart didn't express concerns about new competition in his statements during the company's second-quarter conference call. He said, "There is a fair amount of history out there of companies that have failed to attend to the details and start strong and peter out." Guthart added that Intuitive has been "very careful and thoughtful" about the details of the systems that it's launched.

But what if Medtronic has been just as attentive to the details of robotic surgery? SVB Leerink analyst Richard Newitter is optimistic about the medical device maker's prospects with its Hugo system. However, he also thinks that Medtronic's move into the robotic surgery market is good news for Intuitive Surgical.

Newitter believes that Medtronic's entrance into the market should help validate the use of robotic surgery overall. He also predicts that the robotic surgical systems market could expand with the availability of another system.

The Book of Proverbs states that "iron sharpens iron." So far, Intuitive Surgical has faced competition primarily from smaller companies. With a much larger rival aiming to capture market share, Intuitive is likely to respond with even more innovation. The climate of competitive innovation could significantly expand the overall market as Newitter expects, which would be good for both Intuitive Surgical and Medtronic.

Profit from the paradox

Changing dynamics comes with the territory when investing in healthcare stocks. Although the change that Medtronic is introducing to the robotic surgical systems market might seem problematic for Intuitive Surgical, the opposite could very well be the case.

Intuitive Surgical has a solid razor-and-blades business model, impressive financial strength, an incomparable track record, and a huge install base working to its advantage. Combine all of that with a growing demand for surgical procedures driven by aging populations across the world and Intuitive Surgical is a really great stock that you can buy and hold for a long time to come. It might seem paradoxical, but new competition on the scene could make Intuitive an even better stock to buy right now.