The alcoholic beverage giant sees its imported brands leading the way, but its wine and spirits results are watered down.

So far in 2019, shares of Constellation Brands (STZ 0.29%) aren't producing the level of blockbuster returns that investors have grown used to in recent years. The alcoholic beverage specialist is still stealing market share from beer giants like Anheuser-Busch Inbev and Molson Coors due to its focus on premium imports like Corona. But other parts of the business aren't doing as well, and earnings growth is suffering as a result of that mixed showing.

On Thursday, Constellation reported second-quarter results that held to those broad outlines. Here are three key takeaways from the announcement. 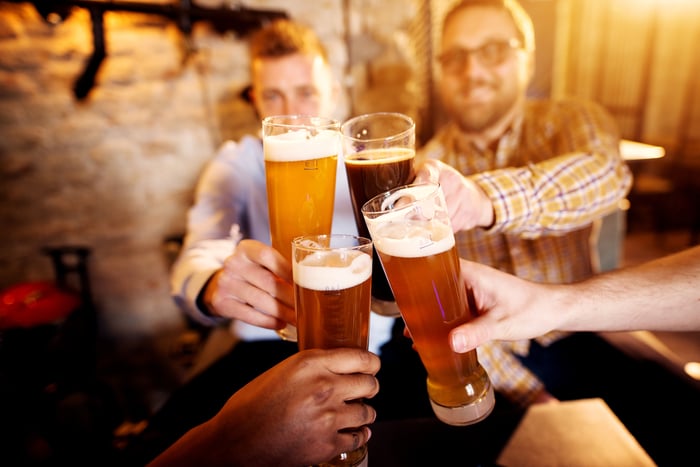 1. Beer is still the growth engine

Net sales inched higher by 2% to $2.3 billion as Constellation's growth story tilted more heavily toward beer sales. That division posted a 6% increase in depletions, a measure of consumption, which marked a heady improvement compared with the prior quarter's 5% boost. In contrast, rivals like Inbev and Molson Coors have been seeing slight volume declines in the U.S. market.

CEO Bill Newlands highlighted this competitive outperformance, saying in a conference call that the Modelo beer brand generated the most growth for the entire U.S. beer industry with its depletion spike of 15%. Other beer highlights include market share gains for Pacifico and for the newly launched Corona Premier brand. The segment notched rising profitability as average selling prices kept climbing. "The winning streak for our beer business continues," Newlands said.

2. The wine and spirits industry is weaker

The news wasn't as good at the struggling wine and spirits division, which saw depletions dive 13%. A good portion of this slump came from the weaker brands that the consumer staples giant is in the process of divesting, but management also noted weakness in the remaining franchises.

Depletions fell 4% for this part of the portfolio, mainly because the company scaled back on price cuts. Operating income fell 20% and was pressured by the pending brand transfer, which is on track to close over the next six months. Still, management was happy to see that its core brands outperformed the wider industry in the period, with Woodbridge wines and Svedka vodka two of the standout winners. Constellation is hoping to quickly get back to growth in this segment, and it is expecting help from a flood of innovative product releases around the holiday selling season.

3. The marijuana market is volatile

Management has big hopes for its cannabis bet through equity ownership in Canopy Growth, but for the time being, investors are likely to see mostly volatile profit swings. To that end, Constellation booked a $484 million non-cash loss for the period tied to Canopy's stock price, which is down over 40% since early July. Investors won't know for some time whether this partnership is a good one, and a lot will depend on how the industry develops over the next few years.

Meanwhile, Constellation still sees fiscal 2020 shaping up as expected, with beer sales rising between 7% and 9% and achieving higher profit margins. The wine business is on track to see declines of around 20% as the divestment concludes but should then quickly start marching toward a 30% operating margin compared with last year's 26%.