Please ensure Javascript is enabled for purposes of website accessibility
Log In Help Join The Motley Fool
Free Article Join Over 1 Million Premium Members And Get More In-Depth Stock Guidance and Research
By Vandita Jadeja - Oct 4, 2019 at 11:19AM

FedEx's stock price has been falling, and there are compelling reasons why you should stay away from it.

FedEx Corporation (FDX -0.31%) has lost $25 billion in market value after the stock plunged 40% over the last year. But it hasn't reached zero yet, which means the losses could continue. Analysts predict that the price is likely to slide even further due to the trade war between China and the United States.

A box of red flags

FedEx recently lowered its annual profit forecast for a number of reasons, including high operational costs, low revenues, and the economic effects of the U.S.-China trade war. China is a huge market for FedEx, and growth there was very slow over the past two months.

The company has missed earnings per share in two of the past four quarters, and there are many headwinds that could prove challenging in the short term. Weak economies clearly mean less spending and less shipping, so companies such as Walmart (WMT -0.50%) will need less items on their shelves. Shipping of heavy equipment through FedEx Freight would also decline. 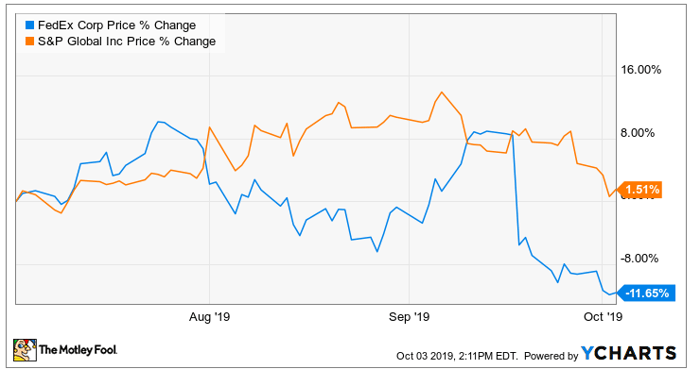 The struggling U.S. economy has led to the breakup of FedEx's relationship with Amazon (AMZN -0.06%). The e-commerce giant let the contract expire at the end of August, and while Amazon contributed only 1% of FedEx's total revenue last year, the breakup does mean FedEx will miss out on a big potential growth market.

The main concern here is that many other large retailers will follow Amazon's lead in building their own logistics networks to avoid third-party delivery costs. Right now, Amazon owns 49% of the U.S. e-commerce market; FedEx is working to get the other 51%, including vendors such as Shopify (SHOP -1.45%) and Walmart. Shopify is building its own fulfillment network, which is growing rapidly. Walmart does use FedEx, but it is a direct competitor to Amazon. This means that as Amazon cuts costs with its own delivery network, Walmart will follow suit -- so its relationship with FedEx might not be healthy for a long time. Small retailers, the only option remaining for FedEx, command about 25% of the market, so there's a real chance that the company will become a smaller player in the coming years.

The company posted diluted earnings per share of $2.84 in the most recent quarter; compared with $3.10 in the first quarter, this marked an 8% decline. The current price of about $145 gives FedEx a price-to-earnings ratio of 10. First-quarter revenue was expected to hit $17.3 billion, so earned revenue of $17 billion marked a 2% drop. Declining revenue growth in the coming quarter should keep investors bearish on the stock.

FedEx does have a low valuation, and its annual dividend of $2.60 -- 1.5% -- is the highest in a decade. The stock is cheap, but the numbers don't support even this valuation. Revenue growth will likely stay in the mid-single digits until 2022. Both revenue and profit are expected to decline in coming quarters. Investors willing to go through economic cycles and invest for the long term might consider this stock, but as long as the company remains challenged, the price will likely stay cheap.

John Mackey, CEO of Whole Foods Market, an Amazon subsidiary, is a member of The Motley Fool's board of directors. Vandita Jadeja has no position in any of the stocks mentioned. The Motley Fool owns shares of and recommends Amazon, FedEx, and Shopify. The Motley Fool has a disclosure policy.