Carvana fell along with other high-flying growth stocks in September.

Shares of used-car e-commerce company Carvana (CVNA 8.22%) fell 18.7% in September, according to according to data from S&P Global Market Intelligence. This high-growth company looking to upend the used-car industry didn't release any material news during the month. Likely, Carvana's stock merely pulled back from profit-taking after huge gains in August, when the company posted a blowout second quarter. September also saw a violent investor rotation out of expensive growth stocks with operating losses, of which Carvana is one.

A nervous market was probably looking for an excuse to take profits in Carvana, which had gained 29% in August and, even after the September sell-off, is still up more than 100% on the year. 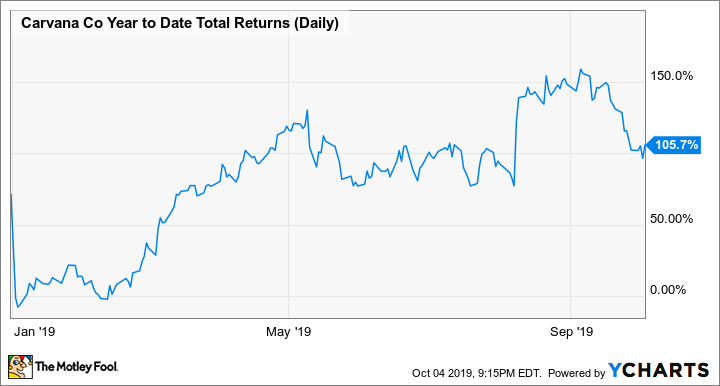 The market got that excuse when the European Automobile Manufacturers' Association reported an 8.4% plunge in August passenger car registrations on Sept. 18. You might ask why weak European sales would affect Carvana, which operates primarily in the United States. In fact, it doesn't matter directly, but concerns over a slowing global economy means purchases of big ticket-items such as cars could slow down along with it.

For its part, the U.S. market reported a 7% increase in August sales from the prior year, but that increase was due to an early Labor Day weekend this year. Labor Day is typically a big weekend for auto dealers, so it skewed results. Through September, U.S. auto sales are down about 1.6% from 2018.

Carvana has been executing to a "T" and blowing away analyst estimates, so I wouldn't let macroeconomic fears skew your decision about whether to buy Carvana's stock. Carvana is still vastly underpenetrated in the overall U.S. market, so its success for the near to medium term will be built on revenue growth, margin expansion, and operating leverage. And of course, remember that while Carvana is an exciting disruptor, it's still generating losses, and its balance sheet is not exactly the best. As such, it remains a promising stock, but only for those looking to speculate on an exciting, albeit risky, growth name.