Two companies in the IT sector made their investors richer over the past five trading days.

It was another of those up-and-down weeks for the market, with indexes dropping significantly one day, then rising high the next. Ultimately, the market more or less ended up on Friday where it started on Monday.

Several companies ignored that volatility, rising notably over the five days to take positions on the "top gainers" scorecard. Here's a glance at two of these winners, both of which happen to be tech stocks. 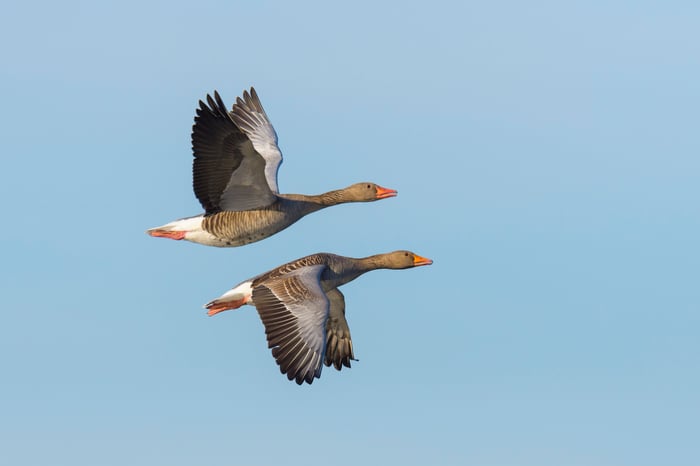 Cloud storage specialist Box ( BOX 0.46% ) wrapped up a sweet 7%-plus gain over the course of the week.

There was little of note that happened to the company across the five-day stretch. Rather, I think the stock made a quick recovery after being slapped with a downgrade from JPMorgan Chase unit J.P. Morgan Securities the previous Friday.

The bank shifted its recommendation from "neutral" to "underweight" (i.e., "sell"), on concerns of client expense-cutting and the risk that customers will migrate to larger and more powerful rivals.

It seems that Box bulls pounced on the chance to pick up shares on the price weakness that resulted from this recommendation chop. Did they have good reason to do so?

The big buy-in from activist investor Starboard Value last month is a vote of confidence in the company. In contrast to its typical approach, Starboard has not been critical of management -- indicating that, true to its name, the company invested because it sees value in Box, rather than an opportunity to benefit by being a disruptive shareholder.

Yet there are concerns about Box's recent performance. Total revenue was up a healthy 16% in the company's most recently reported quarter, but deferred revenue (up 10%) and billings (6%) didn't keep pace. This performance portends a subsequent slowdown in the total revenue growth rate.

Also, while Box flipped to a net profit on a non-GAAP (adjusted) basis, said profit is rail-thin, and the company expects the same, at best, for the entirety of 2020. Box is not yet a proven profit-maker, and big competitors -- Microsoft and Alphabet, as pointed out in J.P. Morgan's note -- are looming.

Box's gain last week was one of the best in the IT sector. I wouldn't necessarily count on a repeat in the coming weeks, though.

As with Box, there was little immediate news during the period that should have helped Palo Alto defy gravity -- save, maybe, for two of its products that received a somewhat technical form of approval from the federal government, an important client.

Perhaps the ever-growing realization of just how mission-critical cybersecurity is in our increasingly digitized world is putting the juice in related stocks, a number of which also traded up during the week.

Palo Alto Networks feels like a good bet, because while its growth rates aren't what they were in the past, they're still robust -- both revenue and billings popped 22% year over year in the latest reported quarter. The company remains a cash-generating machine, so it can buy growth with its frequent acquisitions of state-of-the-art security businesses.

Palo Alto Networks feels it can continue to improve billings at a minimum 20% clip over the next few years. The company is a relatively established and mature business, and it operates in a highly competitive and fast-moving field. That potential level of growth, then, is very encouraging. I think this stock is still worth considering.