After a long wait, leading video game company Activision Blizzard (NASDAQ:ATVI) made its biggest splash yet on mobile platforms with Call of Duty Mobile. The game launched on Oct. 1 and has already been downloaded a staggering 35 million times, according to a press release from the company. In the first four days, Call of Duty Mobile was the most downloaded iOS app across all categories in the App Store in over 100 countries.

Call of Duty Mobile appears to be reaching the audience it needs to compete with other mobile shooter games that have been on the market for a while, including Tencent's (OTC:TCEHY) PUBG Mobile, as well as Epic Games' mobile version of the ultra-popular Fortnite. One thing that could help Call of Duty Mobile continue to grow its player base is that it was developed in partnership with Tencent's award-winning TiMi Studios. It appears that Tencent took all its learnings from PUBG when it designed Call of Duty Mobile. 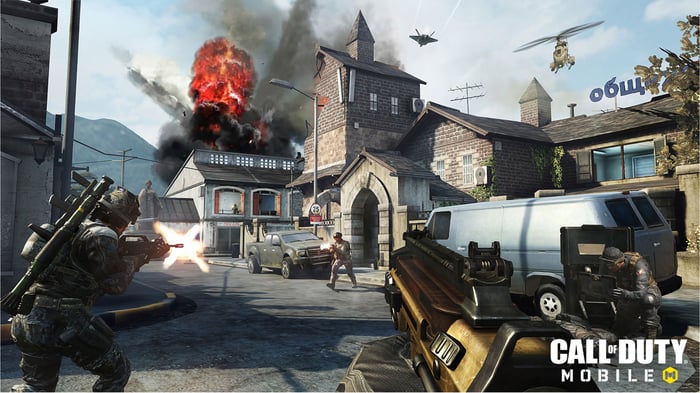 Still, Call of Duty Mobile is a free-to-play title, which means the price for entry is simply owning a mobile device. To generate revenue from the game, Activision Blizzard must convince players to keep playing and spend money on in-app content. The question is, can Activision keep the content fresh enough to make Call of Duty a significant profit contributor over the long haul?

Grabbing a piece of the $68 billion spent on mobile games

It's estimated that Call of Duty Mobile has already generated $2 million in revenue, which is impressive for a free-to-play title released just four days ago. Players can make in-app purchases to load up on points and unlock in-game content, such as upgrades for weapons. These items can also be unlocked for free, but enough players get so engaged with these games that video game companies can make hundreds of millions off in-game spending. Activision actually generated two-thirds of its revenue in the second quarter from in-game spending.

It was expected that Call of Duty Mobile would draw high interest in the early innings, since it's part of one of the best-selling franchises in console history. It's a staple gaming brand in the growing $152 billion video game industry, but with the mobile version, Activision sees an opportunity to capture a piece of the fastest-growing market for game sales. The mobile game market is estimated to grow 10% this year to reach $68 billion.

This is also the company's attempt to position itself well for mobile esports, which has found a solid footing in Asia. Activision Blizzard sees esports as a significant long-term growth opportunity, as younger generations are watching traditional sports less and engaging more with video games.

The key to long-term success

The key to sustainable growth for Call of Duty Mobile will be whether it reaches new players on a platform that is known to attract a lot of casual gamers who may not be as experienced with shooters. While mobile shooters are popular in Asia, mobile players in North America seem to gravitate to titles like Candy Crush, made by King Digital Entertainment. Activision Blizzard acquired King for $5.9 billion in 2016.

Additionally, it's uncertain whether console or PC gamers will play the mobile version of Call of Duty. Playing a shooter game on mobile is a totally different experience than playing with a controller or a mouse and keyboard. However, early reviews indicate that Call of Duty Mobile could be just as engaging for seasoned pros and new players alike. Players aim their weapon on the small mobile screen with their thumb, and the weapon fires as soon as the aiming reticle lines up with an enemy. This seems easy to do but requires skill to do really well. Activision Blizzard has also included the best maps and other content from past Call of Duty games, which should lure diehard fans to try the game on mobile.

The next obstacle is to monetize the player base. To put Call of Duty Mobile's 35 million downloads in perspective, one of Activision's most widely played games on console and PC, Overwatch, reached a peak player base of 40 million. Call of Duty Mobile has nearly reached that benchmark in less than a week and should continue to grow in the coming weeks.

The trick to turn the game into a serious moneymaker is to keep the content fresh and interesting. If the developers can accomplish this, Activision Blizzard could have a lucrative new gaming property in Call of Duty Mobile to pad its earnings growth. We'll know more about management's plans when the company announces third-quarter earnings in another month or so.