Disney's (NYSE:DIS) new aerial gondola system had a rough breakdown over the weekend. A seemingly minor collision at one of the Skyliner resort stations shut down the platform for roughly three hours, leaving hundreds of guests stranded on the cable system until they were either rescued or transported back to an unloading station when operations resumed. The system had been in service for less than a week.

No one was seriously injured, and guests who had to go through the ordeal received hundreds of dollars of compensation apiece in the form of gift cards and theme park tickets. The real damage is to the platform's reputation. Skyliner -- connecting four of Disney's moderate resorts with Disney World's two least-visited theme parks -- is now temporarily closed. There is no indication as to when it will resume operation, and even when it does, the stigma of the accident will linger. Skyliner will always be the mode of transportation that can leave you dangling in a tight gondola cabin for several hours the next time something goes wrong. 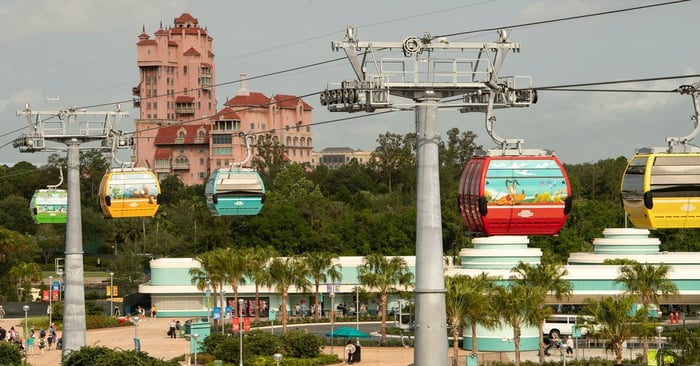 Hanging on every line

There is a lot riding on Skyliner's success. Disney World's iconic monorail gives guests a scenic form of transportation, and Skyliner stretches the resort's reach with a second form of aerial transport. It's not a surprise that the three Disney World hotels on the monorail line are its most expensive, and Skyliner would eventually give the four resorts it serves the wiggle room to lift their rates. Even if most riders were simply using Skyliner to get from Epcot to Disney's Hollywood Studios -- a trek that can also be made by boat or a long walking path -- those guests would also be exposed to some of Disney World's lesser-known resort hotels.

This new way for visitors to get from one theme park to the other would also increase turnstile clicks at both locations, just as rival Universal Orlando did when it opened the Hogwarts Express-themed train line that connects its two theme parks in 2014. Folks with one-day tickets for a single park would have to upgrade to slightly pricier park hoppers to experience both gated attractions on the same day. In short, Skyliner has the potential to increase attendance, revenue per capita, hotel occupancy levels, and overnight rates with a single new mode of transportation. Disney is one of Wall Street's top consumer discretionary stocks because of the meticulous planning that precedes any major rollout, and this one was going to be a low-key business driver on several different levels.

The system wasn't perfect ahead of Saturday night's reputation smasher. Reviews were generally positive, but there were still some less-than-glowing opinions given the long lines to ride and the occasional stoppages for brief mechanical hiccups or the loading and unloading of guests requiring extra attention.

Investors were already keeping a close eye at Disney's stateside resorts given the surprising dip in attendance in the quarter ending in June. Heads have rolled because Star Wars: Galaxy's Edge hasn't lived up to its initial hype, and Hurricane Dorian disrupted operations at Disney World during the peak Labor Day holiday weekend. The Skyliner accident over the weekend may not seem as disruptive in the near term as the other two events, but it could linger if the transportation system doesn't return to service soon or if guests are again left dangling for hours.