Please ensure Javascript is enabled for purposes of website accessibility
Free Article Join Over 1 Million Premium Members And Get More In-Depth Stock Guidance and Research
By Jim Crumly - Oct 8, 2019 at 7:00AM

The market has yet to recognize Vertex's accelerating cash flow and growing future prospects.

Investing in biotechnology stocks can sometimes feel more like gambling than serious wealth-building. Company success usually rides on the binary events of clinical trials and regulatory approvals, and the odds of positive outcomes can seem unknowable to the average investor. Shareholders have to sit tight and be patient while the typically unprofitable company burns through its cash, advancing its pipeline.

Fortunately, there are a few biotech stocks that are lower-risk bets in the space. One of these, Vertex Pharmaceuticals ( VRTX 9.66% ), which has a large and growing current drug business, is profitable. Plus, the drugmaker dominates its market. The combination of high earnings growth and a developing pipeline is creating a good opportunity for investors, and there are three reasons why the next year could be big for the company.

Vertex sells three drugs for cystic fibrosis (CF), with no significant competition in the space. The drugs address different populations of patients with the genetic disease, and together the three are approved to treat about half the 75,000 CF patients in North America, Europe, and Australia. 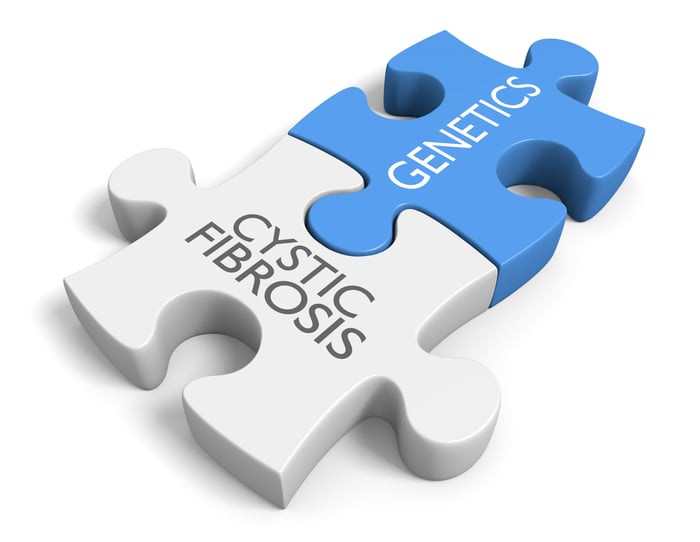 Adoption of recently launched Sydemko, label expansion to younger patients, and European launches contributed to 25% growth in revenue to $940 million in the fiscal second quarter. The company expects full-year revenue of $3.6 billion to $3.7 billion, a 20% increase over 2018 at the midpoint.

That rapid sales growth is fueling fantastic earnings growth and cash generation. Vertex's highly regarded management team keeps a tight rein on expenses, and its gross margin is a huge 86%, meaning that much of that revenue growth falls straight to the bottom line. Combined selling, general, and administrative expenses grew only 13% in Q2 on a GAAP basis and 1.5% excluding stock-based compensation and extraordinary items. As a result, non-GAAP earnings per share rose 34% in Q2 and operating cash flow grew 37% to $789 million.

Next year should be even better. Vertex filed a new drug application with the U.S. Food and Drug Administration (FDA) this summer for a triple combination drug that would expand the company's addressable market from 50% to 90% of the CF patient population. The trial data on the combo was so strong, analysts consider an FDA approval in March a near-certainty, and market research company EvaluatePharma judges it to be the most valuable pipeline drug in the industry, worth a net present value of nearly $20 billion. Wall Street expects Vertex to earn $6.17 per share in 2020, up 35% from this year.

2. Cash is creating a lot of options

The mountain of cash that Vertex's CF dominance is creating gives the company plenty of options to build its pipeline through research and development and deals with other companies. The company ended last quarter with $4 billion in cash and marketable securities. The company is using its financial strength to invest in expanding its pipeline beyond CF, through internal development efforts, acquisitions, and partnerships.

Today Vertex has clinical and pre-clinical programs in five areas outside CF. The company plans to initiate phase 2 studies soon of VX-814, a drug to treat the rare genetic disease alpha-1 antitrypsin deficiency, which is life-threatening and affects about 100,000 patients in the U.S. and Europe. The company also has early programs in kidney disease and pain.

But just in recent months, Vertex has stepped up its efforts to use its capital for new partnerships and acquisitions to invest in new growth. Last month, the company announced plans to acquire Semma Therapeutics for $950 million in a potentially game-changing attempt to develop a cure for type 1 diabetes. Then, on Sept. 30, Vertex announced a collaboration with Ribometrix, a small, privately held biotech that's developing a means for discovering small-molecule therapeutics that target RNA. The approach could be used to treat a variety of intractable diseases, and Vertex would have an exclusive global license for up to three molecules in return for up to $700 million in potential payments.

These bets are deliberately long-term ones, aimed at the time when growth from the CF franchise is winding down. But Vertex says it expects several important clinical data readouts from its pipeline programs in 2020. Any of those have the potential to boost the stock price next year, as do announcements of more deals.

3. Vertex may be the safest way to invest in gene editing

Vertex's most notable partnership is with CRISPR Therapeutics ( CRSP -5.78% ), a relationship that began in 2015. Vertex and the gene-editing specialist are collaborating on CX001, a treatment for blood diseases beta thalassemia and sickle cell disease.

This is not an insignificant program. CX001 is Crispr's lead program and the first one among companies working on CRISPR Cas9 gene editing to enter human trials. Vertex and Crispr will share equally in the revenue from the therapy if it makes it to market. Vertex also owns the exclusive right to license up to five other treatments from Crispr Therapeutics.

Gene editing with CRISPR Cas9 is a promising technology that's attracted a lot of attention from investors, but the potential for setbacks along the way is high. Scientists will likely solve the problems eventually, but ownership of stocks that depend solely on the technology will be roller-coaster rides. Instead, investors can buy shares of Vertex, which is an equal partner with Crispr Therapeutics on the most advanced drug in the CRISPR space, but also has a very profitable business outside of gene editing to offset the risk.

Vertex's investments in gene editing are long-term bets, but with patient enrollment continuing for CTX001 and preliminary safety and efficacy data expected by the end of 2019, positive results could be a catalyst for the stock in the next few months.

The future is getting brighter for Vertex

With earnings growth accelerating, Vertex stock has become cheap even without considering the development pipeline. Shares sell for 28 times the analyst consensus for earnings in 2020, more than reasonable for a company growing earnings by over 20% this year and expected to grow by 35% next year. Growth in CF won't go on forever, but Vertex is deliberately building a pipeline and partnerships that it expects will kick in with revenue when CF sales start leveling off. And with billions in cash and a debt-free balance sheet, Vertex is just getting started with that.

Can Vertex Make Billions With a New Game-Changing Treatment? The Answer May Be Just Ahead