Volatile oil and gas prices and a looming debt load might endanger the energy company's plans to boost its payout.

The Canadian oil sands and natural gas producer Cenovus Energy (NYSE:CVE) announced plans to grow its dividend and shrink its significant debt at its analyst day last week. Though the company's exposed to oil and gas prices, management said any shifts in those commodities wouldn't affect its payout plans. With oil prices low, investors may doubt whether the company can keep that promise – but its assets suggest that management might indeed reach its goals. 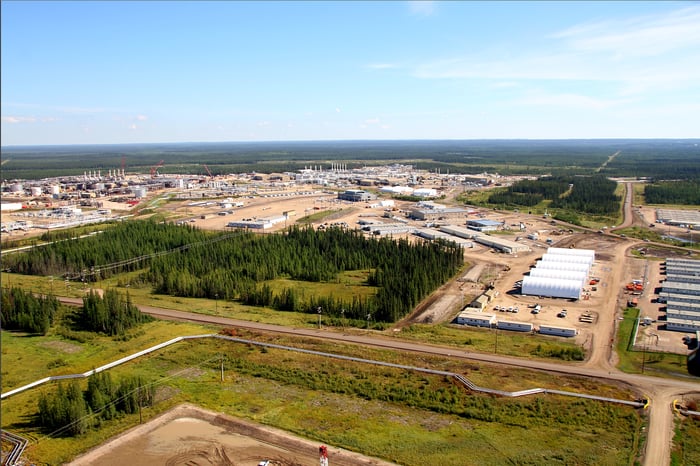 Also, Western Canadian Select (WCS) -- the Canadian oil benchmark -- dropped to an average price of $19.39 per barrel over the last three months of 2018. During that quarter, given the exposure of its oil sands production to WCS prices, Cenovus posted negative adjusted funds flow -- cash from operating activities excluding net change in non-cash working capital -- of CA$33 million.

Canadian oil sands and natural gas represented 77.3% and 16.7% of Cenovus' production, respectively, during the first half of the year. And with its 50% interest partnership in two U.S. refineries and some minor crude oil and natural gas liquids (NGL) production, Cenovus is exposed to Canadian and U.S. oil and gas prices.

Thanks to the recovery of WCS's average price to $45.87 a barrel during the first half of this year, Cenovus's adjusted funds flow reached CA$2.13 billion.

Given the company's volatile results, you should take management's statement that commodity costs won't affect the dividend with a grain of salt.

In addition, the company's debt load remains significant. Management has confirmed its goal of reducing the company's net debt to CA$5 billion over the next several quarters. But at the end of Q2, net debt of CA$7.1 billion still represented 2.4 times the company's adjusted EBITDA.

Given its important debt load, the company can't sustain a dividend amid a long stretch of depressed oil prices and negative adjusted funds flow. But in spite of all that, the risks related to Cenovus' exposure to commodity prices remain limited.

Management highlighted that the company can sustain its dividend when WTI averages $45 a barrel. In contrast, the breakeven price of U.S. producers, without paying a dividend, varies from $48 to $54 a barrel, according to the Federal Reserve Bank of Dallas.

The lower decline rate of Cenovus' oil sand assets, thanks to their geological characteristics and associated extraction method explains the company's lower breakeven price. Oil sands are made of sand, water, and bitumen. To get oil out, Cenovus sends steam through a horizontal well to liquefy the bitumen and pump it back to the surface. Thanks to this technology, Cenovus' oil sands decline rate stays below 15%, whereas other types of assets such as light tight oil involve an average decline rate of 36%. Since its production declines more slowly than other sources, Cenovus doesn't have to spend as much finding new production to replace it.

Even after its recent 25% increase, the annualized dividend of CA$0.25 per share corresponds to a modest dividend yield of 2.2%. And the dividend doesn't represent a significant cash outflow for Cenovus. The company's first-half adjusted funds flow of CA$2.13 billion exceeds the company's annual required capital to hold its production flat (CA$1.0 billion to CA$1.2 billion) and pay its dividend (CA$307.2 million).

Besides, Cenovus' reserves support a sustainable dividend over the long term. The company's proved reserves -- oil and gas that estimates suggest are highly recoverable -- correspond to 31.3 years of production, based on the midpoint of management's forecasted production in 2019.

Thus, Cenovus represents an interesting investment opportunity for dividend-oriented investors seeking exposure to the energy sector. The dividend is exposed to the limited risk of a prolonged WTI price below $45 a barrel. But at current WTI prices above $52, Cenovus can grow its dividend, reduce its net debt, and increase its production.