Please ensure Javascript is enabled for purposes of website accessibility
Log In Help Join The Motley Fool
Free Article Join Over 1 Million Premium Members And Get More In-Depth Stock Guidance and Research
By Mark Prvulovic - Oct 8, 2019 at 7:00AM

The battered cannabis giant could become the dominant player in the athletics market.

Investors found themselves a little surprised on Friday after the industry's largest cannabis company announced a peculiar acquisition. Canopy Growth (CGC -6.16%) bought a majority stake in BioSteel Sports Nutrition, a major sports-beverage company that has partnered with numerous sports teams across North America. This was a bit of an unexpected move for Canopy, especially since many investors had balked at its previous $1.4 billion in quarterly losses that originated mostly from aggressive M&A activity.

While some investors had hoped that Canopy would slow down on acquisitions following these losses, some significant upside comes with this deal. Although other cannabis giants such as Aurora Cannabis (ACB -4.62%) have made their own forays into the athletics market, Canopy's buyout of BioSteel puts it ahead of its competitors in this high-growth niche. 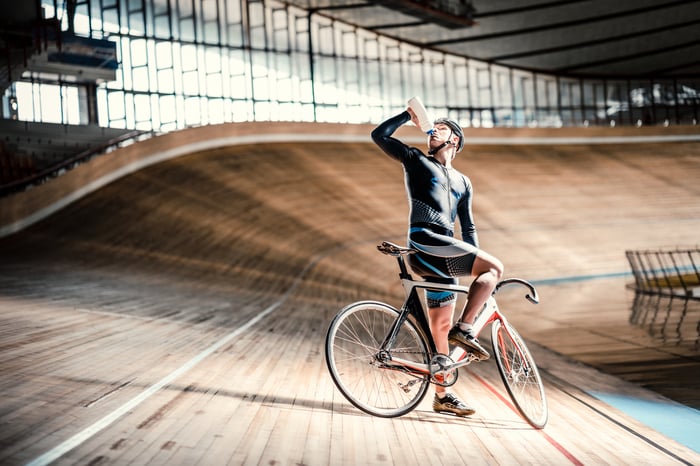 Looking at the BioSteel deal

BioSteel Sports Nutrition was founded back in 2009. In the 10 years since its inception, it has seen its products used by 70% of North America's major sports leagues, including the NFL, NHL, MLB, and other leagues. Some of BioSteel's best-known brand ambassadors include hockey legend Wayne Gretzky and golf star Brooke Henderson.

The company's CEO, John Celenza, mentioned that he has been considering buyout offers from other companies for several years. However, he has recently been leaning to the cannabis space instead due to many athletes complaining of chronic pain and how cannabinoid (CBD) based drinks could help as painkillers.

It's a deal that makes sense for Canopy Growth as well. BioSteel currently has more than 10,000 points of distribution across the U.S. and Canada for its athletics beverages, so the cannabis giant would easily be able to scale out its own CBD beverage products in the future with this established retail chain. Coupled with BioSteel's ongoing relationship with major sports leagues, it would be easy for Canopy to leverage these connections to become the main provider of CBD sports drinks for teams across the continent.

Although the exact figure agreed for the BioSteel buyout hasn't been confirmed, Canopy Growth has stated that the deal would be entirely done via cash. "This acquisition allows us to enter the sports nutrition space with a strong and growing brand as we continue toward a regulated market of food and beverage products that contain cannabis," said Mark Zekulin, Canopy's CEO, regarding the acquisition.

The sports nutrition market is currently estimated at being worth $50 billion worldwide, with plenty of room for CBD beverages to capture some of that market share. CBD is especially appealing for athletes for providing its natural pain-relief properties without producing the same high as other cannabis compounds such as THC (tetrahydrocannabinol).

At the moment, the CBD beverage market is estimated at being worth just $227 million this year but could easily rise to $1.4 billion by 2023. This is a 617% growth rate over just three years, a figure that makes it one of the fastest-growing markets in the industry. Coupled with the fact that Canada will soon implement its 2.0 legalization, which would allow the sale of CBD-derivative products such as beverages, the CBD beverage sector could see significant growth in this area.

However, that's not to say that Canopy doesn't have competition. Rival cannabis giant Aurora has inked its own partnership with the UFC. While that's a major news development, the deal between Aurora and the sports league would be a research arrangement to learn the impact of CBD on athletes and what effect it has on treating chronic pain. Unlike Canopy, however, the deal doesn't extend any further to potential retail partnerships, so in this sense, Canopy does hold an edge over its rival.

The last question worth addressing is whether this development changes the overall picture of Canopy Growth as a potential investment. In its most recent financial results, Canopy reported an alarming $1.4 billion quarterly loss that spooked many investors. With no profits on the horizon and further losses seeming likely for the world's largest cannabis company, many shareholders started to become skeptical about its ability to generate profits.

A deeper look into where this $1.4 billion loss came from reveals that $826 million of it was due to expensive M&A activity. While Canopy still has significant cash reserves remaining, the rate at which it's spending money on acquisitions means it would end up running out of cash within the next few quarters if management doesn't slow down.

While it's uncertain how much Canopy paid for BioSteel, it wouldn't be surprising to see a final price tag in the hundreds of millions of dollars. It's arguable that Canopy should rein in its spending and instead focus on increasing the profitability of its core business. That's exactly what many cannabis investors want right now, having gotten fed up with companies chasing explosive revenue growth at the expense of their bottom lines. While this deal definitely is a positive development for Canopy, it likely won't do much to assuage investor concerns about either the company's own profitability or that of the cannabis industry at large.