Oil prices have remained volatile since the initial attack on Saudi Arabia's oil facilities. Taking these geopolitical risks into consideration, analysts and shareholders alike have begun to consider how further spikes in oil prices would impact energy stocks. While it is easy to get wrapped up in the day-to-day developments shaping the oil and gas markets, it is also important to take a step back and look at things from a long-term perspective.

One energy stock I recently looked at is ConocoPhillips (NYSE:COP). The $284 billion energy giant undertook a significant shift back in 2012 when it split off its nondrilling business to focus only on upstream operations, differentiating itself from rival energy companies. Over the past six months, however, its share price has fallen by 17%. Following its recent decision to sell off its oil assets in the North Sea to focus on other areas, it will be interesting to see where ConocoPhillips will go in the future. 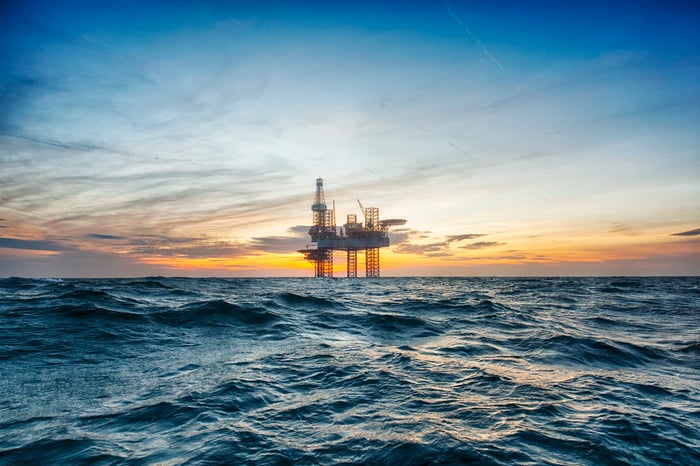 The most recent development for ConocoPhillips was its decision to sell $2.7 billion in oil and gas assets in the North Sea. Production from these assets amounts to 72,000 barrels per day, a fair chunk of the company's total output of 1.29 million b/d.

The deal is part of the company's ongoing strategy to slim down and refocus on better-performing projects, as its total oil production has decreased significantly from the 1.55 million b/d seen back in 2014. The cash from the sale should also be a major boost to ConocoPhillips' balance sheet, which had around $8.5 billion in cash at the end of the second quarter of 2019 compared to total debt came in at around $14.9 billion.

Nor is ConocoPhillips the only energy giant to depart from the North Sea. Rival ExxonMobil (NYSE:XOM) announced earlier in the year that it was selling its own North Sea assets near Norway for $4.5 billion. These developments aren't surprising, since many energy giants have chosen to withdraw from the area to focus on other, more promising markets. The North Sea is transitioning into a region populated by numerous independent producers trying to see how much oil they can extract from the area's aging oil and gas deposits.

Where does ConocoPhillips go from here? For one thing, management mentioned that it has seen promising results from its Alaskan operations. After the Middle East, Europe/North Africa, and the lower United States, Alaska is the fourth-highest oil-producing region, but some exploration projects in the state are showing promise. In a conference call with analysts, management mentioned its appraisals in the Greater Willow Area and Narwhal, where initial test wells showed positive results. ConocoPhillips now plans to drill additional wells in these areas to see whether it will stumble across a major find.

However, ConocoPhillips' strategy isn't so much based on exploring new projects as it is about trimming the operational fat and increasing its internal margins. This is reflected in its decision to stay away from potentially expensive deals in the already crowded Permian Basin. Unlike many other energy giants that are rushing to acquire assets in the area, ConocoPhillips has promised to limit itself to $6 billion in capital expenditures this year. Instead, the company plans to stick to just making smaller deals, buying out neighboring properties and smaller assets.

From a financial perspective, ConocoPhillips is well cushioned financially should the oil markets turn for the worse. Below, I've included a chart summarizing ConocoPhillips' revenues, debt, and overall cash trends over a couple of years.

Investors can see that most of the company's metrics have been steadily improving. Net income has nearly quadrupled from over the past couple of years, while ConocoPhillips' debt dropped by almost a quarter. With its cash reserves also growing over the past year, now likely to surpass their 2017 levels when including this recent $2.7 billion sale, ConocoPhillips is one of the more impressive energy giants in the markets today from a financial perspective.

Currently, its stock is trading at a price-to-earnings ratio of just over 10. ExxonMobil (NYSE:XOM) and Chevron (NYSE:CVX) look more expensive with earnings multiple between 14 and 15. Firms with more modest valuations, such as Royal Dutch Shell (NYSE:RDS.A) and Albemarle (NYSE:ALB), are trading near the same level as ConocoPhillips, with P/E ratios between 10 and 11.

The one area in which ConocoPhillips comes up short in comparison to its peers is its dividend. Back in 2016, the company had a dividend payout of around 9% before it fell to its current 2.3%. In comparison, ExxonMobil is offering a 5.1% dividend, which is much more appealing to dividend investors.

Should you buy ConocoPhillips?

In the end, ConocoPhillips isn't really a company looking to impress investors with exciting projects or raw production growth. What it's trying to do is make itself one of the best-run oil companies in the market. Considering how its financials have steadily improved over the past couple of years, making a compelling case for its stock is pretty easy.

The only thing missing for me is a higher dividend from ConocoPhillips, but it's conceivable that management could up its yield as net income continues to improve and debts decline. Warren Buffett always suggests buying great businesses at the right price. By this philosophy, I'd argue that ConocoPhillips passes with flying colors and is a solid cornerstone of any energy investor's portfolio.