The tech giant's return to the smartphone game is nothing like its last foray.

Last week, Microsoft (MSFT 0.71%) made a surprising move and showed off its first new smartphone in several years. The Surface Duo has two 5.6-inch displays (connected by two hinges) and runs on the Android operating system, and the company expects to launch it in time for the 2020 holiday season.

There's a lot that we still don't know, including how much it'll cost or which wireless carriers will sell it, but the debut of the device itself, even if it's a year before it goes on sale, was enough to make headlines. If you're a Microsoft investor, you may be having mixed feelings. After all, it wasn't all that long ago that Microsoft tried -- and failed -- to take on Apple (AAPL 0.03%), Samsung, and other smartphone makers.

But investors shouldn't think the introduction of the Surface Duo means that Microsoft is betting big on phones again. And they certainly shouldn't worry if it isn't well received when it arrives in stores next year. 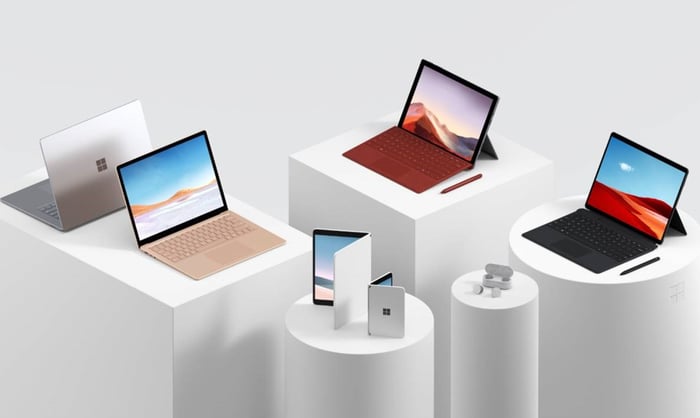 Microsoft is far more than devices these days

The important thing to remember is that Microsoft is not the same company that it was when it paid $7 billion for Nokia's device business and related patents back in 2013. Back then, it was already years behind its smartphone competitors, and the gamble never helped it close the gap with Apple and Samsung's popular devices.

Since then, Microsoft has reinvented itself into a cloud computing and services company. Revenues are spread out almost evenly among three main businesses. Sales from the Intelligent Cloud segment totaled $11.4 billion in the most recent quarter, representing 34% of its total. Meanwhile, Microsoft's Productivity and Business Processes segment (which includes Office 365 subscriptions, LinkedIn, and other services) made up 33% of sales, and its More Personal Computing segment (which includes Xbox revenue, Windows licensing, and Surface device sales) accounted for 33% of revenue. But among those segments, More Personal Computing brings in the smallest share of operating income -- about 30% in fiscal 2019.

That pivot has turned the tech giant into the No. 2 cloud computing company, competing effectively for its share of a global cloud market that will be worth $331 billion by 2022.

Its success in cloud-computing services is part of a larger trend among technology companies to bet on service revenue as the driver their revenues in the coming years, rather than relying on device sales. Even Apple, which for almost seven years derived more than half its revenues from iPhone sales, has changed directions and building its future on services. (That streak ended last quarter.)

So while Microsoft will soon be in the smartphone game again, investors don't need to worry if the Duo flops or simply becomes a forgettable member of the Surface family. Microsoft has successfully made a transition from relying largely on one-time software license sales to become a dominant cloud-based software and services player. And the Duo, however successful or unsuccessful it is, won't change that.