Please ensure Javascript is enabled for purposes of website accessibility
Log In Help Join The Motley Fool
Free Article Join Over 1 Million Premium Members And Get More In-Depth Stock Guidance and Research
By Donna Fuscaldo - Oct 9, 2019 at 9:15AM

The holidays are coming, which should bode well for e-commerce stocks as more consumers shift their purchasing habits online.

The holiday season will soon be upon us, which means people will soon start shopping in earnest. Many will turn to the internet to find the perfect gift, despite the efforts of retailers to lure them into stores.

Online sales still make up a small portion of overall retail spending, but they're growing. E-commerce and non-store sales are forecast to increase by 11% to 14% in 2019, reaching between $162.6 billion and $166.9 billion, respectively. The National Retail Federation predicts total retail sales for the holidays will increase as much as 4.2% year over year to $730.7 billion.

The holiday season isn't the only thing going for the e-commerce market. As more consumers shift their shopping to the internet, traditional retailers are forced to shutter stores. That presents an opportunity for e-commerce players to steal some of that lost business. Goldman Sachs pegs the value of that opportunity shift at $7.5 billion.

If that's not enough good news, online shopping is also growing outside of the U.S. in places that have growing middle-class populations like China, Latin America, and India.

With so much to like, it's no wonder many e-commerce companies have stocks that are up double-digit percentages year-to-date. But like with any industry, there are the haves and the have-nots. The haves is where investors should focus their investment dollars. Here's a look at three of them. 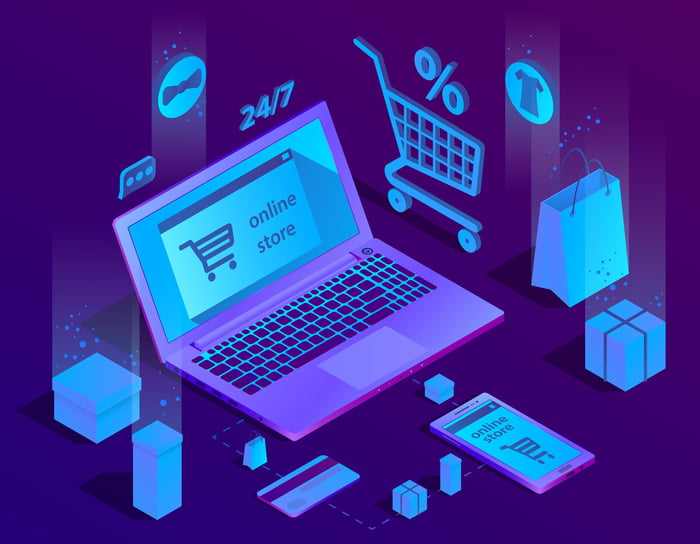 1. Shopify powers e-commerce behind the scenes

No matter what a merchant plans to sell these days, it is going to need a platform to sell it online. For years that has been dominated by the likes of e-commerce giants like Amazon and eBay. But a third player -- Shopify (SHOP -6.15%) -- has emerged recently and is growing at a fast clip.

The Canadian e-commerce platform specialist enables individuals and companies to build their own online stores. Shopify gives merchants access to a slew of features and apps to help small businesses sell their products directly and/or list them on marketplaces and social media sites across the internet.

That business model has served Shopify well since its launch in 2004 and IPO in 2015. Take its second-quarter 2019 report as evidence: It posted a 48% year-over-year increase in revenue to $362 million.

Shopify is in expansion mode and recently announced a $450 million deal to acquire 6 River Systems, a warehouse fulfillment company specializing in warehouse robotics and cloud software. The acquisition is aimed at supporting its new business, Shopify Fulfillment Network, which it introduced in June. That platform is designed to give new and existing merchants access to lower shipping costs and enhanced delivery services.

While the stock is up 127% so far in 2019, some analysts expect it to surge even higher as we head into the holiday selling season and more merchants join the fast-growing e-commerce platform. In fact, one Wall Street watcher predicts Shopify will end 2019 with more than 1 million merchant customers. Not bad for a company that's been around for four years.

Not everyone in America considers themselves a fashionista, and that is where Stitch Fix (SFIX -5.33%) comes in. The styling service company splashed on to the scene in 2011, offering consumers access to their own personal stylists without having to get off the couch. For a monthly fee, clients get curated pieces of clothing and accessories shipped to their door. They pay for what they keep and return the rest to the San Francisco-based company. That type of service has resonated with consumers.

Stitch Fix ended the fiscal fourth quarter earlier this month with 3.2 million customers, up 18% compared to a year ago and in line with Wall Street expectations. It had forecast revenue growth of 20% to 21% for Q1 of 2020, which fell below analysts consensus estimates of about 23% growth. The e-commerce company blamed more sales of lower-priced items and less marketing dollars spent in the fiscal fourth quarter for the lowered guidance.

Despite the results, there are reasons to like Stitch Fix as a play on the e-commerce market. It has expanded into new clothing categories -- men and children -- and recently launched a new service in which customers can purchase items on the website in addition to getting their scheduled box of clothing. It's also enhancing its algorithms and giving customers new ways to shop, which bodes well for sales, especially as we approach the holidays.

Investing in Chinese companies these days is fraught with risk. The U.S. and China are in a protracted trade war, with President Trump ramping up the tough talk lately. Nobody knows for sure what the president has in store for Chinese companies listed on the U.S. stock market, which has worried investors and weighed on share prices. Still, that doesn't mean there aren't some Chinese stocks worth looking at. One of those is Alibaba (BABA -1.66%), China's largest e-commerce company.

Alibaba caters to billions of customers in China and around the world. Its business has been booming. In its latest quarterly earnings report (released in mid-August), Alibaba posted revenue growth of 42%, handily beating Wall Street expectations. It ended the quarter with an adjusted EBITDA of about $5.7 billion, up 34% year over year.

Despite all that good news, the stock has been battered in the past several weeks (down about 10%), which could provide a buying opportunity. After all, despite tariffs, a trade war, and posturing from the White House over the past year, Alibaba stock is still up 19.8% year-to-date.