The Greenbrier Companies (NYSE:GBX), the second largest rail car manufacturer in North America (and the largest in Europe and South America) has seen the value of its rail car order backlog decrease over the last three fiscal years.

That trend has caught up to the stock price, as it has significantly underperformed the S&P 500 over the past year, declining nearly 60%. But in its most recently reported quarter, ending May 31, 2019, the rail car backlog ticked up, and the company announced a major acquisition of the manufacturing assets of American Railcar Industries. Let's take a look at how Greenbrier is building strong momentum heading into the fourth quarter report and beyond.

Greenbrier manufactures most rail car types used in North America and Europe, other than coal cars. This includes tank cars, intermodal, and automotive rail cars, in addition to conventional cars used to move grain, steel, paper, and many other products. It also has one North American location to manufacture marine barges.

In addition to manufacturing, Greenbrier has several other related segments. Its leasing and services segment includes a North American leasing fleet of 8,100 cars the company owns, as well as Greenbrier Management Services (GMS). GMS offers software and services for rail car maintenance, accounting services, and total fleet management. These services touch 25% of North America's fleet with almost 370,000 cars under management.

Its wheels, repair, and parts segment offers wheel services from eight North American shop locations; twelve repair, refurbishment and maintenance shop locations; and four components parts manufacturing facilities. The twelve repair shops were retained from a joint venture partnership with Watco Companies, which was dissolved in Aug. 2018 after failing to provide expected returns. The company believes it can now operate these with improving financial performance through fiscal 2019. 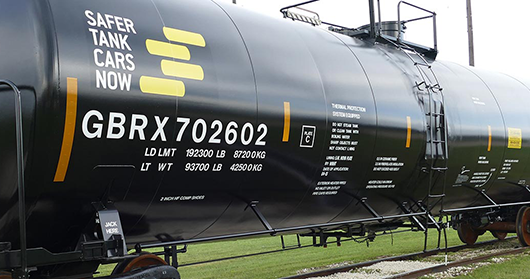 Greenbrier has also been increasing its international presence for further diversification. Fiscal 2018 saw about 30% of orders and 25% of deliveries outside of North America. It's investing in the Saudi rail industry with Saudi Railway Company (SAR) -- Greenbrier will provide $100 million in new cars for the venture and will facilitate raising $170 million more with SAR as well as international public and private investors.

The company also has a 60% ownership in Greenbrier-Maxion, the leading South American rail car manufacturer located in Brazil, as well as 24.5% ownership in a Brazilian manufacturer of various castings and components for rail cars and other heavy industrial equipment.

Perhaps the biggest move toward new growth will be from an acquisition. In late July 2019, Greenbrier closed on the purchase of the manufacturing business of American Railcar Industries (ARI). This increases its U.S. workforce by 1,600 employees to 4,000. It brings a broader product portfolio and access to new markets. The company believes the added domestic capacity helps insulate Greenbrier from uncertainties related to North American free trade.

Chairman and CEO William A. Furman said regarding the deal, "Acquiring the manufacturing operations of ARI is a major milestone for Greenbrier. The transaction advances three of our strategic goals: strengthening our presence in the North American rail equipment market, growing at scale, and developing a robust talent pipeline. This is Greenbrier's greatest expansion effort yet."

This acquisition comes at a time when the business is looking to be on an upswing. The new rail car order backlog was valued at $2.7 billion at the end of fiscal year 2018, and remained there through the second quarter of 2019. It has ticked up to $2.74 billion in third quarter, however. The table below also shows the sequential increases in quarterly new rail car orders throughout fiscal 2019, as well as the estimated year-over-year increase.

Coming into fiscal 2019, the company noted that there were rail car shortages in many categories. Management also expected leasing rates to continue to increase and predicted revenue to exceed $3 billion for the first time, compared to $2.4 billion in 2018. The company can still deliver on those targets with management noting in the third quarter report that it "anticipate[s] further strong momentum in the fourth quarter."

While the stock price has rebounded from its 52-week low, it's still down more than 30% year to date and more than 50% from its year-ago highs. With a generous dividend yielding 3.6% and the business taking on new scale both at home and abroad, this may be a good time to add Greenbrier stock to your portfolio.