With exposure to potentially volatile fuel and labor costs, and steadily increasing regulatory oversight, the trucking industry has increasingly turned to consolidation to defend its profits. The best example of this strength-through-size approach is Knight-Swift Transportation Holdings (NYSE:KNX) which was created through a merger in 2017. For long-term shareholders willing to withstand the near-term pain of a mini trucking apocalypse, Knight-Swift could present a lot of upside if the new company can justify the valuation level that its components enjoyed before the merger. Reaching those past levels would translate to a share price more than 30% higher than today's – but Knight still has miles to go to reach that goal. 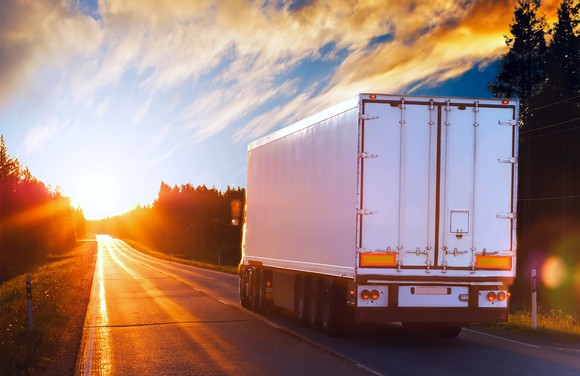 Knight-Swift has a long road ahead to reach its ambitious goals. Image Source: Getty Images.

At nearly $7 billion, Knight boasts the biggest market capitalization of any pure-play US highway freight company. Born out of the merger between market leaders Swift and Knight in 2017, the combined company now operates close to 19,000 trucks and nearly 60,000 trailers in North America according to the most recent 8-K. Knight's share price has surged by 26% so far in 2019, while remaining nearly 30% below the highs achieved in spring of 2018, when US tariffs on Chinese industrial and consumer imports began to take effect, sending transport shares lower along with industrials and materials

The cyclical nature of trucking businesses means that current operations in the segment are now feeling the impact of fleet expansion in recent years to meet rising demand and fees during the post-tax-cut growth spurt. This increased headcount on the road created an overhang starting last year, as trade-with-China jitters slowed down demand from some sectors. As a result, overcapacity jumped over the summer, with industry data provider DAT reporting that year-over-year van rates declined by $0.34 per mile in August, despite an increase in volume of nearly 8%.

The burden of this excess truckload capacity has so far impacted the spot market – shipments that were not prearranged through corporate contracts. As a result, smaller independent operators have been the most vulnerable to a downturn. The impact on little guys has been catastrophic, but large operators like Knight, who operate on long-term contracts to a greater degree, have kept billing levels healthy according to industry sources.

The second-quarter earnings Knight released in July matched the high end of the pre-announced range of $0.57-$0.58 per share, but trailed analysts' initial consensus of $0.59. These results reflected both seasonal and cyclical softness that was already baked into the share price. In its conference call after the release, Knight management guided expectations toward weaker contract rates.The company faces a series of difficult comps for the second half that should see loaded miles turn negative for the period.

On the call, company management noted troubling signs for the industry, including reduced truck orders and lower used truck prices, which have fueled a spate of recent small carrier bankruptcies. From a long-term perspective, market entrants with new business models such as Uber Freight and Amazon Logistics stand poised to compress margins for Knight – particularly in the brokerage/logistics segment, which registered an annual volume decrease in Q2 and accounts for nearly 20% of the company's top-line.

Although this indicates that the upcoming business environment will be tough even for a well-positioned players like Knight, management stressed that it's still squeezing out new money-saving efficiencies from its merger with Swift, which it said would offset cyclical weakness.

Keeping a foot on the pedal

The key to Knight's strategy in the coming cycles hinges on expanding market share, defending margins, and harnessing its strong post-merger cash flows to reduce debt levels and continue buying back shares.

At 15.3x consensus full year earnings, KNX is trading above transport peers, but still well below the 20x forward earnings at which Knight peaked before merging with Swift. For long-term investors who anticipate that any US recession on the horizon will be both brief and shallow, Knight appears attractively positioned to expand market share at the expense of smaller fleet operators, while using scale to defend margins from new-economy competition.