Please ensure Javascript is enabled for purposes of website accessibility
Log In Help Join The Motley Fool
Free Article Join Over 1 Million Premium Members And Get More In-Depth Stock Guidance and Research
By James Brumley – Oct 12, 2019 at 8:45AM

The pair of strange retailing bedfellows may be laying the groundwork for cross-merchandising -- or even an acquisition.

On Tuesday, general merchandise chain Target (TGT -2.24%) and the revived Toys R Us toy-store brand made a compelling but peculiar announcement: The former would be handling the latter's online shopping and fulfillment duties, at least until further notice.

It's odd simply because the two are, in the end, competitors. Leveraging the well-loved Toys R Us name to help an established rival expand its own customer base is a bit counterintuitive. GlobalData's managing director and in-house retail expert Neil Saunders assessed it best, saying "It's a neat solution but not an ideal solution," because the owners of the Toys R Us brand are "ceding control to another competitor."

More may be taking shape here than an awkward relationship, however. A handful of industry analysts suspect this partnership could be an omen of a bigger play by Target, if not a precursor to an acquisition. 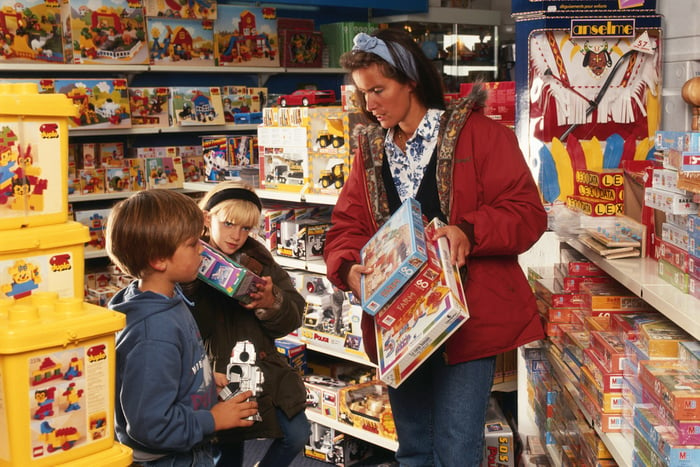 Toys R Us is back, sort of

Once the premier name in toy retailing, Toys R Us ultimately became a casualty of the Amazon.com (AMZN -1.57%) steamroller as well as competition from large national retailers like Target and Walmart (WMT -1.93%). It was taken private in 2005 as a means of saving the organization, but that didn't help; the company filed for Chapter 11 bankruptcy in 2017. It never truly solved its debt and growth challenges and opted to call it quits last year.

The company name still has value, though, which is why a consortium of private investment firms scooped it up out of bankruptcy in January of this year. In June, its new parent company, Tru Kids Brands, confirmed plans to begin opening brick-and-mortar stores again.

So far, none have been reestablished, although two are reportedly in the works. No e-commerce apparatus has been established, either, hence the partnership with Target. Or ... perhaps Target and Toys R Us are both thinking about something bigger.

A deal would align with existing toy strategies

"My suspicion is that Target is either looking to purchase Toys R Us or launch their own private label brand for toys," writes RetailWire's Meaghan Brophy, echoing an idea from Art Suriano, CEO of customer-experience consultancy The TSi Company. Suriano believes that "Target may have other plans with Toys R Us behind the scenes for future joint ventures, which could be anything from Toys R Us departments in the Target stores to further online involvement." Another retailing expert, Mark Ryski, told RetailWire that "this sounds like a test drive for an acquisition of some kind by Target of the Tru Kids assets."

Any prediction of an acquisition should be viewed with suspicion. In this particular case, though, the underlying logic makes a lot of sense. Target is looking for ways to exploit opportunities where it can, and the toy arena is a market where Target has effectively done so.

As an example, in August, Target and Walt Disney announced that Disney mini-shops would be established inside a small number of Target stores, offering merchandise that had previously been exclusive to Disney's stores. The initial effort would only alter a couple of dozen stores, but it laid the groundwork for an expansion of the partnership.

Brophy's notion that a private-label expansion could be in the works isn't far-fetched either. As of late last year, Target was managing 20 different in-house brands in several product categories, while exclusively offering several third-party toys. A complete in-house lineup of toys would be the next natural step in that progression. A Toys R Us acquisition (vis the brands Tru Kids manages) would come pre-packaged with several, including True Heroes, Imaginarium, Dream Dazzlers, and Animal Zone.

If this happens, it could be a game-changer

Not every Target shareholder is a fan of wading deeper into the toy market, where the company still has to compete with Amazon.com as well as bigger brick-and-mortar rival Walmart. Early last year, when Toys R Us was crumbling and Target was already formulating a plan to secure the toy seller's displaced customers, some institutional shareholders were quick to point out that birth rates in the U.S. were slowing, and that toys weren't a core part of Target's product base.

They could be, though, and arguably should be. Prior to last year's closure of all remaining Toys R Us locations, toy sales in the United States had grown for four straight years; despite the absence of Toys R Us during the holiday shopping season, the toy industry still racked up $21.6 billion worth of revenue in 2018. Moreover, with the odd asterisk in year-over-year comparisons that marked the absence of Toys R Us now completely in the past, the NPD Group reports that the 9% year-over-year sales growth for toys observed during the first three weeks of July bodes well for the industry's growth through the end of the year.

The consumer dollars are out there. It's just a question of who's willing to do what to get them. It seems that Target would and could do more with -- and for -- the Toys R Us brand than any other retailer. So far, Target is being tight-lipped about any plans it might have.

Of course, if Target truly wanted Toys R Us, it arguably would have bought the latter company during its bankruptcy proceedings. Nevertheless, this partnership is an enticing prospect for investors to keep on their radars.