Please ensure Javascript is enabled for purposes of website accessibility
Log In Help Join The Motley Fool
Free Article Join Over 1 Million Premium Members And Get More In-Depth Stock Guidance and Research
By Daniel Miller - Oct 13, 2019 at 8:00AM

Wall Street has been cautious investing in the broader automotive industry lately, but here's why CarMax will continue to excel.

It isn't the easiest time to be a CEO of a major automotive company in the United States. There is plenty of doom and gloom about the automotive industry, and a lot of it is warranted. Nobody knows what to expect from tariffs or trade wars; debt-loaded millennials who could shy away from big-ticket auto purchases, expanding ride-hailing apps, and self-driving technology could all change our desire to own vehicles -- and that's bad news for much of the automotive industry.

But while many auto stocks struggle, CarMax (KMX -0.30%) continues to thrive. Let's look at why CarMax is doing so well, highlights from its second quarter, and what investors can expect down the road.

Not all autos are equal

The unfortunate part of investing in the automotive industry at the moment is that the doom and gloom tends to spread across the entire industry -- but that's a mistake. Not all automotive stocks are created equal, especially considering the difference between auto manufacturers and used-car retailers, among others. CarMax's different business model is one reason it's doing so well.

Major automakers, such as General Motors (GM -0.47%), operate in a capital-intensive industry -- making vehicles, especially quality vehicles, isn't cheap -- and one way to boost profits is to build larger vehicles such as SUVs and trucks. As GM has drastically moved its sales mix to favor larger vehicles instead of passenger cars, and loaded more technology and options in vehicles, their price tag has increased substantially. Let's take the second quarter, for example: GM's average transaction prices (ATPs) rose by $1,575, to a second-quarter record of $37,126 per unit. ATPs have consistently increased in recent years, which has helped major automakers push revenue and profits higher, but it's also opened the door for used-car retailers such as CarMax to offer a compelling alternative -- and it's an alternative that gets more compelling the higher new light-vehicle prices rise. 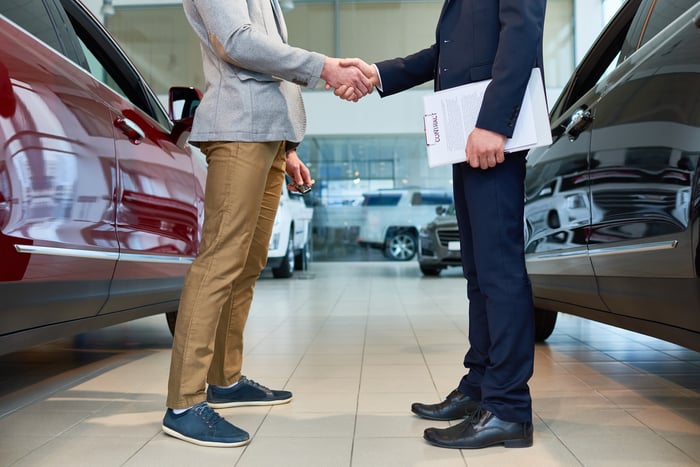 Here are some intriguing figures to digest: During the first quarter of 2010, the gap between new-vehicle ATPs and three-year-old used ATPs was $8,996. Fast forward to the second quarter of 2019, and that gap has widened to $14,443. That gap is likely to continue widening as more off-lease vehicles enter the used-vehicle market, adding to supply -- remember, leased vehicles surged over the past decade, and lease penetration remains at record levels -- and as major automakers focus on bigger new vehicles with higher price tags.

With increasing economic uncertainty, potential trade war impacts, and rising ATPs, new-vehicle sales have plateaued in the U.S. after a long run since the end of the great recession. In 2015, new-vehicle sales reached 17.5 million in the U.S. and declined to 17.3 million in 2018. Edmunds anticipates 2019 sales to reach only 16.9 million. But CarMax should be better positioned to weather that overall slowdown. 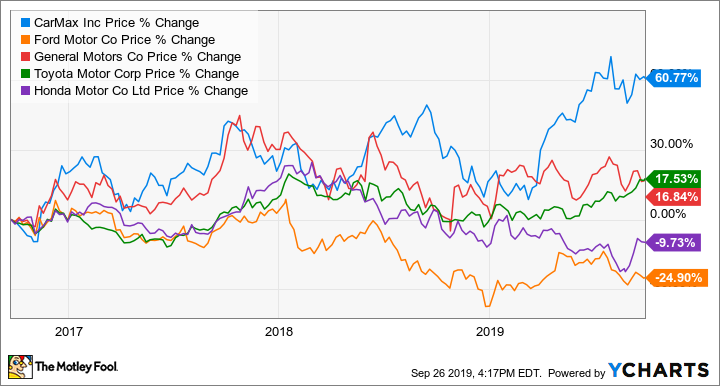 The good news for CarMax investors is that the retailer has more upside, despite already being the nation's largest retailer of used cars. Because the used-car industry is insanely fragmented -- as the industry leader in 2018, CarMax estimates it sold only 3.3% of vehicles aged zero to 10 years old across the nation -- CarMax is able to leverage its leading size and scale to reach more consumers with its omnichannel strategy. Essentially, there are three consumers: Those who want the entire car purchase done online, those who want a mix of online and in-store, and those who only want to shop in person. Some retailers do well focusing only online, such as Carvana. Other smaller used car dealers can't afford a large website or the inventory required to bring a website value or reach. CarMax can now reach all three types of used-car shoppers through its omnichannel approach that includes online, online and in-store, and stores alone. But that strategy is still growing and will be able to serve all three styles of shoppers throughout CarMax's entire network base only by the end of the year -- currently it reaches about one-third of its base. CarMax is already thriving, but there's plenty of upside since its market share has plenty of room for growth.

The key thing for investors to take away is that while headlines about a plateauing automotive industry might be true for new-vehicle sales, vehicle manufacturers, and parts suppliers, among other auto stocks, not all auto companies are created equal. As the gap between new and used vehicle prices expands, and as CarMax's footprint, scale, and omnichannel strategy expand, the company should continue to thrive.