The industrial supplier is boosting its top and bottom lines in a volatile environment.

Industrial and construction supplies wholesaler Fastenal (FAST 3.05%) saw its stock surge by 17% on Friday, after the release of its fiscal third-quarter 2019 results. The company's earnings exceeded investor expectations, and its year-over-year growth rate hit the high single digits. Importantly, the results also alleviated worries over the potential for trade tariffs to cut into the organization's profit margins.

As we review the quarter, note that all comparative numbers are presented against those of the prior-year quarter.

Critical details from the quarter 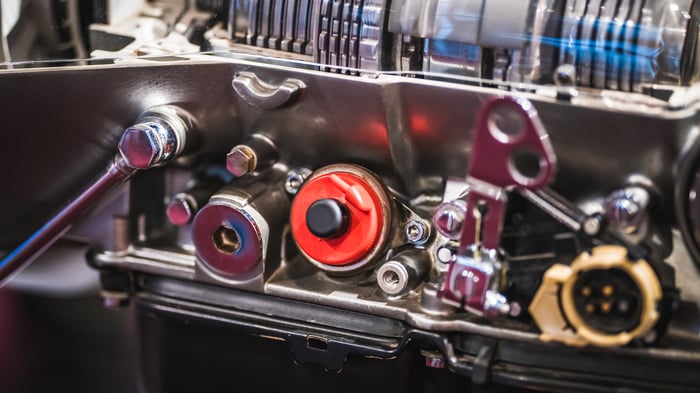 Fastenal's strategy of on-premise growth through supplies vending machines and the more comprehensive Onsite inventory solution has made it an enticing investment candidate over the past several quarters. Expansion continued in the third quarter: Fastenal signed 5,671 industrial vending machines, bringing its total signings to 16,713 machines in the first nine months of the fiscal year. Total installed machines grew 12% year over year to 88,327.

Nonetheless, management observed that "slower economic activity has lengthened the sales cycle for vending." Executives currently expect to complete 22,000 vending machine signings this year, versus a previously stated goal of 23,000 to 25,000 units. That still represents a fairly brisk growth target.

During the organization's earnings conference call, CEO Daniel Florness attributed some of the reduction in the pace of vending machine signings to customers' hesitation because of the uncertainty in the global economy. The CEO lauded the company's ability to push through appreciable signings under these conditions and also highlighted the fact that Fastenal's average revenue per installed vending machine increased during the past three months on a year-over-year basis.

The company added 84 new Onsite locations during the past three months and has tacked on a total of 283 new locations in the first three quarters of 2019. Management still believes its full-year goal of 375 to 400 new installations is within reach. Fastenal counted 1,076 active Onsite locations at quarter's end.

As Fastenal heads into the final quarter of the year and looks ahead to fiscal 2020, it appears to be gaining momentum despite a vulnerable growth environment in the supplies distribution business. Fastenal has skated past the earnings obstacle of tariffs through timely price increases, and it's overcome broader economic inertia by ramping up on-premise installations to gain market share. The supply chain specialist will look to close out 2019 in very decent shape: With just a few weeks left in the fiscal year, shares are up nearly 40% year to date.