Please ensure Javascript is enabled for purposes of website accessibility
Log In Help Join The Motley Fool
Free Article Join Over 1 Million Premium Members And Get More In-Depth Stock Guidance and Research
By Daniel B. Kline - Oct 13, 2019 at 11:50AM

The media giant has built up an impressive list of intellectual property to help fuel its earnings.

Walt Disney (DIS 2.21%) seemingly has the perfect formula for success. It owns massive properties/franchises full of characters people know and love. Those franchises can then be used to produce films, television shows, video games, theme park rides, pajamas, and, well, anything else you can think of for the interested consumer.

The problem has been that while the stock has been trading well above its five-year average for much of this year, its longer-term stock market performance has been generally stagnant. For much of the past five years, Disney stock has traded around $100 -- maybe a little above and maybe a little below -- but it broke out of that trend in early March and climbed as high as the mid-$140s before settling in around $130 (roughly where it was trading at market close Oct. 10).

Stock prices, however, don't always reflect value, and that can be especially true of a public-facing brand like Disney. A box office bomb, for example, may not result in a meaningful hit to earnings, but the public may see that as a sign of something bigger (the idea of "Solo bombed, so people no longer like Star Wars" is a recent example) driving the stock down or at least keeping it pretty stagnant.

The reality is that the House of Mouse has built a very solid business with an amazingly strong foundation. It also pays a steady dividend, which makes it an even more attractive candidate for your retirement portfolio. 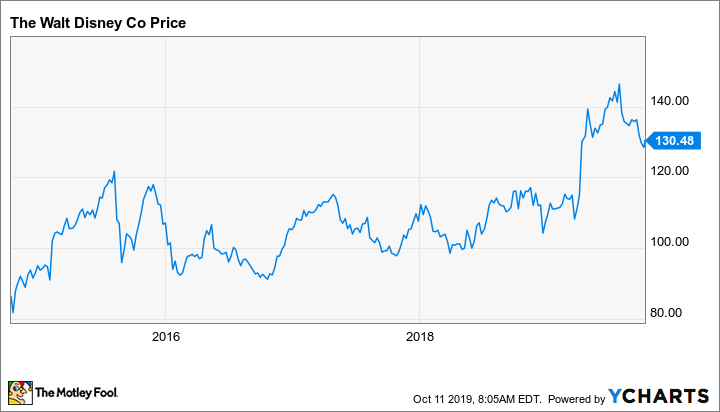 The Avengers, Pixar, Marvel, Star Wars, and Goofy (oh, my)

Disney has built a more or less unassailable business model based around intellectual property (IP). When most companies release a movie slate, they have a mix of franchises, new ideas, and adaptations from other formats. The Disney box office slate contains almost all franchise properties that are near-sure things.

Yes, sometimes a film like Solo misfires. But, for the most part, Disney's franchises are almost guaranteed hits. In any given year, the company can release two or three Marvel movies, two Pixar films, a Star Wars movie, a Disney animation sequel, and an update or live-action remake of one of its classics. Alongside those releases, the company can try to create a new property knowing that any failure won't greatly impact the success of its film division overall.

All of that top-tier IP also helps the company across all of its divisions. Disney+, its streaming service, will launch with a slate filled with shows in the Star Wars and Marvel universes along with Pixar and classic Disney character fare for kids. All of those franchises are, of course, also incorporated in the company's theme park division and are used liberally in consumer products.

None of the above even accounts for franchises the company recently obtained from Fox, which include The Simpsons and Avatar (along with getting the rights to Marvel comic characters like X-Men and Deadpool). It's a potent mix of content that makes the company somewhat immune to changing distribution methods. Disney has characters people want to follow and will seek out wherever they may be. 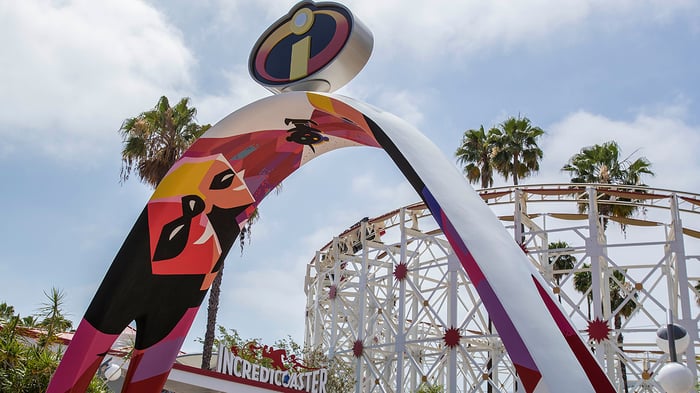 Walt Disney can use its IP for movies, TV, theme park rides, and much more. Image source: Walt Disney.

Disney has traditionally paid its dividend in two equal installments six months apart (instead of on the quarterly system many companies use). Its two most-recent payments, made in December 2018 and this past July were for $0.88 per share ($1.96 on an annualized basis). In that same time period, Disney reported earnings per share (EPS) of $7.93 making its dividend payout a very affordable 24.7% of earnings.

The company likely uses the twice-a-year payment system because its profits tend to be uneven (probably a function of the expense/payout cycle for the film business and a little bit due to seasonality in its theme park business). By paying out twice a year instead of quarterly, it protects cash flow.

That overall dividend, however, is well supported by the company's business. By owning top-tier IP, Disney has built a flexible business model that should work for decades to come. There will be bumps in the road since consumer tastes are never fully predictable, but CEO Robert Iger's comments in Disney's third-quarter earnings call show just how dominant the company has been at the box office. Said Iger:

So far this year, we've released five of the top six movies including four that have generated more than $1 billion in global box office. ... Avengers: Endgame is now the highest-grossing film in history with almost $2.8 billion worldwide. Captain Marvel, Aladdin and The Lion King have each surpassed $1 billion and with more than $960 million in box office to date, Toy Story 4 will likely cross that threshold in the coming weeks. And all of these movies will be on Disney+ in the first year of launch.

It's the last line that fully explains the company's value in your retirement portfolio. These films were draws at the box office, which means they will also be draws on Disney+. Disney owns the IP, and that content can be used to draw eyeballs (and dollars) to whatever the company decides to launch.