Pennsylvania Real Estate Investment Trust (NYSE:PEI) has been a disappointing stock for investors over the past few years. The REIT has experienced steady earnings pressure as it has gotten rid of lower-performing malls and endured more than a dozen department store closures in its remaining malls.

As a result, PREIT stock has plunged from more than $20 three years ago to around $5 today. That has sent the stock's dividend yield soaring to more than 16%. 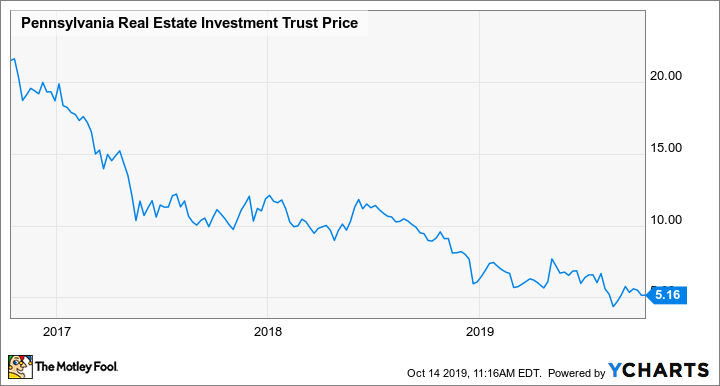 The good news is that PREIT has been aggressively redeveloping space vacated by department stores at its malls. In the short run, this has driven its debt load higher without boosting its earnings (because few of the new tenants had opened for business and begun paying rent). However, this redevelopment activity is finally starting to wrap up, leaving PREIT with a much-improved set of malls -- and paving the way for a return to earnings growth.

Updating a struggling mall in a great location

A little less than a month ago, PREIT opened its signature redevelopment project, Fashion District Philadelphia, a mall that was completely rebuilt over the past several years. However, the first phase of a less-heralded redevelopment project also opened that same weekend at nearby Plymouth Meeting Mall.

Plymouth Meeting Mall lost one of its two department store anchors in early 2017, when its Macy's store closed. This exacerbated the mall's troubles, which stem from its location less than 10 miles from King of Prussia, one of the largest and most successful malls in the world. While the Plymouth Meeting area is densely populated and has fairly high household incomes, it has been hard to operate a successful traditional mall in such proximity to King of Prussia.

Recognizing this issue, PREIT is adapting Plymouth Meeting Mall to better serve nearby residents and to be conducive to shorter trips. On Sept. 20, Burlington and Dick's Sporting Goods opened in space formerly occupied by Macy's. Both new anchors have entrances from the mall as well as from the parking lot, encouraging customers to explore the rest of the mall interior. As a result, traffic to the mall interior surged by more than 40% on opening weekend. A Miller's Ale House restaurant also opened at Plymouth Meeting Mall in recent weeks. The Edge Fitness will open a gym there later this month, followed by a new Michaels store -- completing the redevelopment -- in early 2020.

Other tenants at Plymouth Meeting Mall include Whole Foods, Dave & Busters, Legoland Discovery Center, an AMC movie theater, Cyclebar, and several sit-down restaurants, positioning it as a center for dining, entertainment, fitness, and quick shopping trips. This will give the property more differentiation relative to King of Prussia. PREIT is also planning for residential development on excess parking lot space at the property. 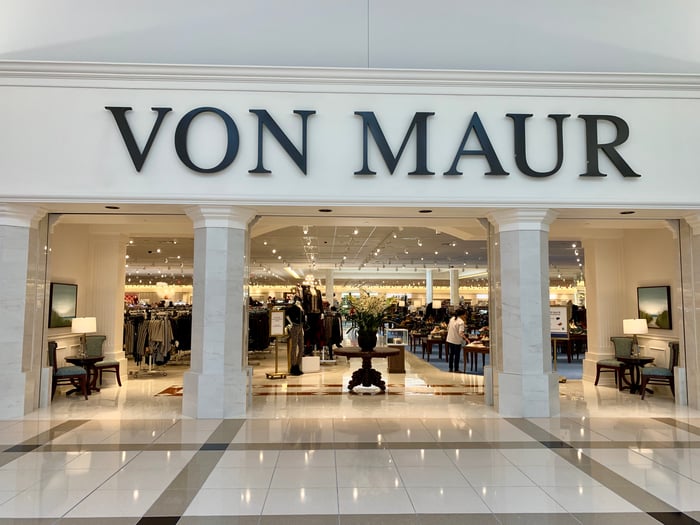 This $90 million project has brought 19 new retailers to the mall, including REI and Urban Outfitters -- with Sephora and White House Black Market coming soon -- and two new dining options, including The Cheesecake Factory's second location in Michigan. Several other prominent tenants have expanded their stores.

Woodland Mall has already been on a roll, growing sales per square foot from $528 in 2017 to $619 for the 12-month period ended on June 30. The 2017 opening of an expanded Apple store contributed significantly to that surge. Adding an upscale department store and other high-end tenants will solidify Woodland Mall's position as the dominant mall in Western Michigan and should drive further growth in sales per square foot. That would allow PREIT to raise rents in the years ahead.

PREIT has three more redevelopment projects slated to wrap up in the first half of 2020. A new upscale dine-in movie theater, Studio Movie Grill, will open at Willow Grove Park Mall, which is PREIT's most productive mall as measured by sales per square foot. Management is also working to add new dining and entertainment tenants at Willow Grove Park.

In addition, PREIT will complete the redevelopment of Valley Mall, near Hagerstown, Maryland, with the opening of a Dick's Sporting Goods store in space vacated by Sears in 2017. The REIT has already replaced two other department stores that closed at Valley Mall with an upscale health club, an entertainment center, and a new Belk department store.

Finally, a new Burlington store will open at Dartmouth Mall in southern Massachusetts, replacing a Sears store that closed in August. PREIT will also bring several other new tenants to this mall, which already has sales per square foot in excess of $500.

Given that PREIT has trimmed its portfolio to about 20 malls, the completion of these redevelopment projects will have a big impact on its earnings trajectory. This should drive a return to strong FFO growth over the next year or so, helping PREIT maintain its high dividend. And with PREIT shares currently trading for just four times FFO, that could power a sharp rebound in the REIT's stock price.