Please ensure Javascript is enabled for purposes of website accessibility
Log In Help Join The Motley Fool
Free Article Join Over 1 Million Premium Members And Get More In-Depth Stock Guidance and Research
By Rick Munarriz - Oct 16, 2019 at 11:50AM

Universal Orlando is introducing an immersive new action stunt show that will open early next year, but it may not be good enough to please fickle enthusiasts.

Disney (DIS 3.98%) has been beefing up its Florida theme parks, ahead of the resort turning 50 in 2021. Sensing that an arms race is afoot, Comcast (CMCSA 2.10%) is also updating the attractions at its nearby Universal Orlando resort ahead of building an entire new theme park that won't open for another four or five years.

The latest step in the transformation of Universal Orlando came on Tuesday when Comcast announced that The Bourne Stuntacular -- a new live stunt show combining stage and cinema based on Comcast's Bourne action film franchise -- will open in the springtime of next year. The new experience replaces the similar Terminator 2:3-D attraction that was closed more than two years ago. One of the park's earliest remaining attractions until it closed down after a 21-year run in 2017, Terminator 2:3-D  also featured live-action stunt sequences, in-theater effects, and a massive screen in a 700-seat theater. If Comcast had a good track record with its new rides and attractions, the market would be buzzing about this week's Bourne Stuntacular announcement, but the first wave of social media reactions is ranging from negative to uninspired. Universal Orlando has largely fallen flat in recent years, and that's not a good place to be when Disney World is on the attack. 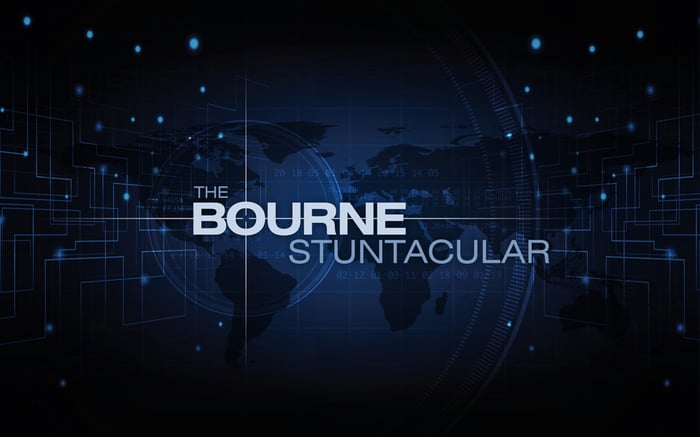 Most of the chatter over the past two years has centered around a Bourne-themed stunt show taking over the space near the entrance of the Universal Studios Florida theme park. Comcast's official announcement when it closed Terminator 2:3-D was that it would be replaced by another attraction based on a live-action Universal Studios film franchise, and there aren't too many properties outside of Bourne that fit the bill that aren't already or weren't previously Universal Orlando attractions.

Comcast's track record since the game-changing addition of The Wizarding World of Harry Potter has been spotty at best. In 2017, it opened Race Through New York Starring Jimmy Fallon, a theater simulation attraction that has received better marks for its pre-show area and virtual queue system than the show itself. Last year, it was Fast & Furious: Supercharged, another ride tethered to a live-action franchise. Unfortunately for Universal Orlando, last year's debutante has been so poorly received that it's a recurring punchline in the resort's own official pass holder group on Facebook. Universal Orlando replaced long-standing attractions that simulate tornados and earthquakes to open Fallon and Supercharged, and they're still disasters.

This year's rollout of Hagrid's Magical Creatures Motorbike Adventure could've been different, and it may be a bar raiser in time. The family-friendly themed coaster is a fan fave for those that have been able to experience the thrill ride, but that's the big asterisk here. The ride has been an operational nightmare. It rarely opens with the park in the morning. It closes before the rest of the park at night. There could be hours of downtime during the day between mechanical, weather, and even recently beehive -- yes, bee-related -- outages. The ride is now more than four months old, and its reliability is resulting in lines snaking out of guest services with complaints near the end of the day.

Universal Orlando needs a hit that is reliably available. The Bourne Stuntacular can be the park's first new attraction in more than five years to get it right. Anyone who has seen Harry Potter and the Cursed Child on Broadway can see how far stage magic can go in creating a transformational experience. Anyone who's ridden Derren Brown's Ghost Train at Thorpe Park knows how far an attraction can go in bending reality even down to the gift shop on the way out. The complaints bubbling up this week are based more on the staleness of the Bourne brand -- even with the new Treadstone show premiering on USA Network this week -- and Comcast's recent track record with new experiences.

All it takes is a few successes under its belt to change consumer perception, a big deal with so many consumer discretionary stocks chasing the same fan dollars that Disney typically lands. Between next year's new stunt show and the still-unannounced Jurassic Park-themed coaster that will likely debut at some point in 2020, Comcast may finally get into the good groove that it needs to compete against the rapidly improving Disney empire next door, especially if the Hagrid coaster can run reliably in the near future without having to sacrifice the thrill elements that make it a standout. Comcast has a lot to gain, but until it proves itself capable of reading the pulse of park goers, it's easy to see why the mind-set out there is that it will fall short.